Over two days in July the Collett Team turned heads as they travelled across the North West with a 170 Tonne Super Grid Transformer.

“In the planning of this movement the Collett Projects Team liaised directly with West Midlands Cheshire and Staffordshire Police Forces to minimise disruption and ensure a safe passage for the convoy, with each Police Force escorting and controlling the load through their jurisdiction,” Liam McLoughlin, Senior Projects Manager. “In addition to the Police, our Teams notified the various councils through which the convoy travelled who, in turn, provided road space and engineers to modify sections of the route which had been highlighted as obstructive in our preliminary planning. These included extensive street furniture removal, the ramping of splitter islands and the pruning of foliage to 5.2m high x 6m wide envelope allowing the 5.4m wide combination to pass safely and unimpeded.” 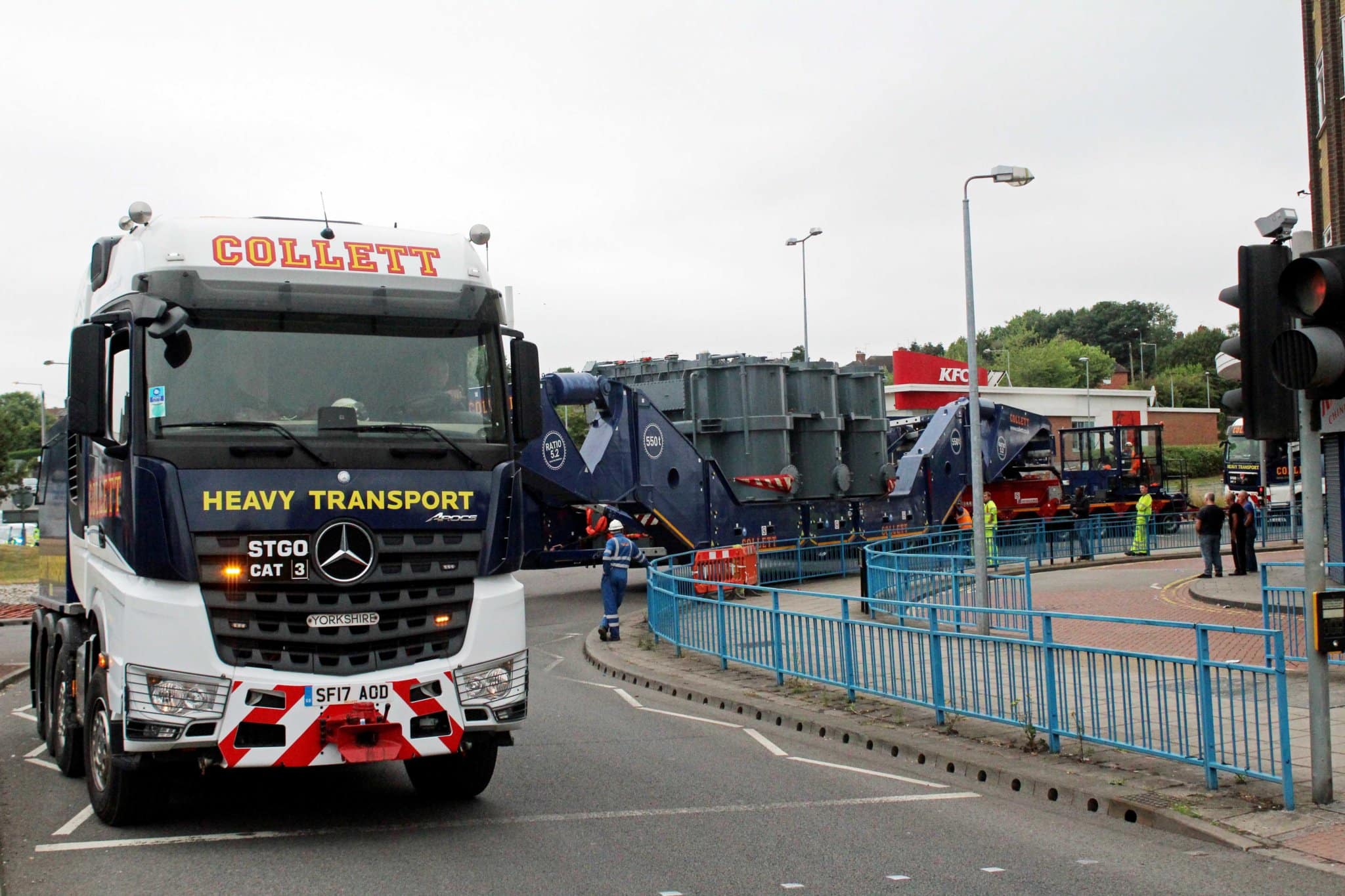 From undertaking the discharging of the Super Grid Transformer from the vessel at Ellesmere Port through to final delivery at Cellarhead Substation, the Collett Projects and Heavy Lift Teams provided complete logistics throughout. Once secured within the girder bridge trailer the Teams worked to a strict two day schedule to deliver the 170 Tonne cargo.
Departing from Ellesmere Port at 8am on Saturday morning and travelling under Police and private escort, the convoy began the first 45 mile stage of the project. After navigating the exit from Ellesmere Port the Teams performed the first of four ‘end change’ procedures before continuing on towards the outskirts of Chester. This involved uncoupling each of the two heavy tractors and re-coupling in a mirrored formation.

After completing this manoeuvre the convoy continued on its pre-defined route, navigating the outskirts of Chester before continuing on towards Northwich and then heading South East towards Holmes Chapel. Here the Team undertook the second of the ‘end change’ procedures, flipping the girder bridge 180 degrees once again and allowing the 69.6m loaded combination to continue on, arriving at the Team’s designated overnight parking site at Barthomley Interchange late Saturday afternoon. 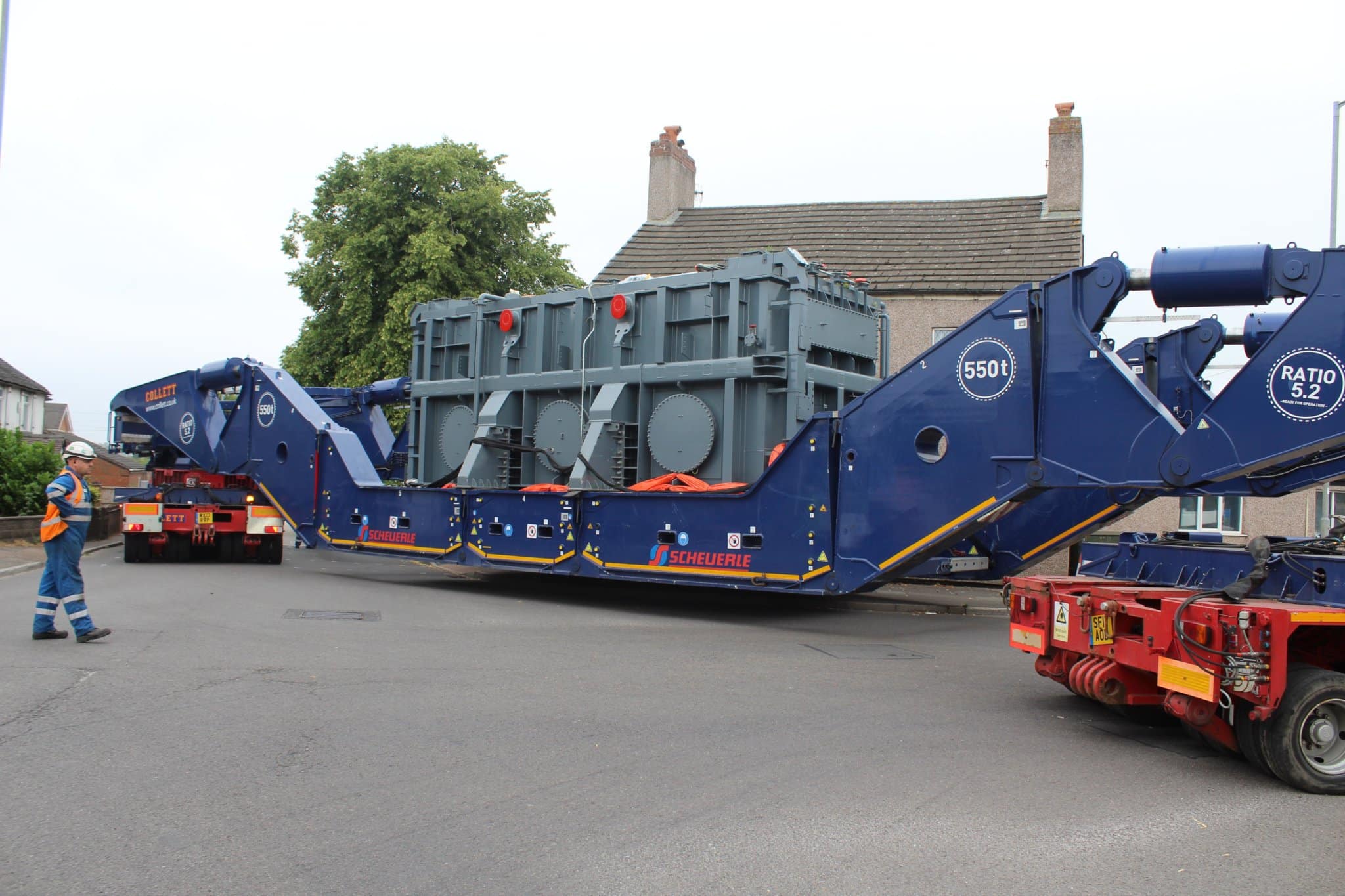 As 8am on Sunday arrived the Team once again took to the roads for stage two of the project. With 22 miles to the final delivery site at Cellarhead Substation the convoy faced two more ‘end change’ manoeuvres and slip road requirements to navigate the route from Barthomley, through Stoke-on-Trent and Werrington before safely arriving at the National Grid Substation. With a total of 12 hours transport time the Team arrived early Sunday afternoon ready to begin final positioning of the transformer. Still safely secured in the girder bridge, the Team manoeuvred the transformer to the awaiting supports on the skid way. Once the transformer was safely positioned on the skid way the side beams of the girder bridge were disconnected and equipped with their support wheels allowing for the front and rear bogies of the girder bridge to be autonomously driven clear of the transformer. Now clear of the girder bridge beams our Heavy Lift Team began the task of hydraulically jacking & skidding the Super Grid Transformer across the 23m track to its resting plinth.