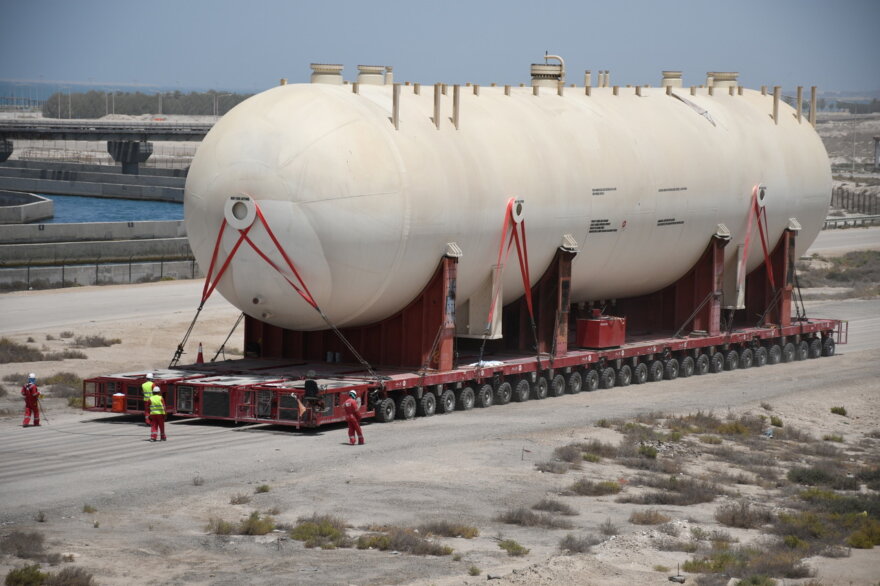 ALE has utilised its experience of transportation over long distances and its international branch network to transport the heaviest convoy in Saudi Arabia.

A total of five slug catchers will be transported internationally through built-up areas and across vast distances. In July, ALE completed the challenging transportation of the first two slug catchers, weighing 2,008t each, from Spain to Saudi Arabia, to the Fadhili Gas Program Project site.

ALE first transported the slug catchers from the fabrication yard through the narrow streets of Gijon city centre to Gijon Port using 32 axle lines of SPMT and then loaded-out. ALE’s diverse experience and ability to draw on a range of equipment enabled them to negotiate this first challenging part of the route safely while in heavily congested areas.

There was limited time for ALE to prepare because it took place over Saudi Arabia’s public holiday periods, so all the preparation had to begin earlier than usual.

The engineering for the transportation plans was completed quickly so that ALE could begin applying for the necessary permits. As the authorities had implemented new systems, obtaining these permits was a considerable challenge with several delays. However, ALE worked hard to maintain communications with both the Port and the Royal Commission to ensure the permits were received on time.

ALE also had to work at short notice to carry out site surveys and analysis at the client’s site. It was important that the client had the information delivered swiftly so that there were enough personnel available to carry out the necessary site work before the public holidays.

Upon arrival at Jubail Industrial Port, the slug catchers were loaded-in and transported 90km in convoy to the Fadhili Gas Program Project using 174 axle lines of SPMT in a configuration of 6 file 30 and 6 file 28.

The movement times were restricted and ALE ensured the convoy was kept moving as much as possible while observing the safe speed restrictions. One of the greatest challenges during the transportation was on a narrow road that had been affected by sand encroachment. ALE acted fast to work with the various authorities to get the road cleared, avoiding any major delays.

Andrew Taylor, Project Manager, said, “Performing the heaviest and largest ever convoy transportation in Saudi Arabia was always going to be a major challenge, especially over such a large distance. In addition, we only had five weeks before the slug catchers arrived at Jubail Industrial Port and the public holidays meant working times were restricted both for ALE and the authorities. “Obtaining all the necessary permissions was a complex process and we worked extremely hard to ensure they arrived on time. The vessel’s arrival time was actually brought forward, but as we had begun the preparations so soon, we avoided any delays because everything was already in place.”

The three remaining slug catchers will be transported later this year during the second phase of the project.