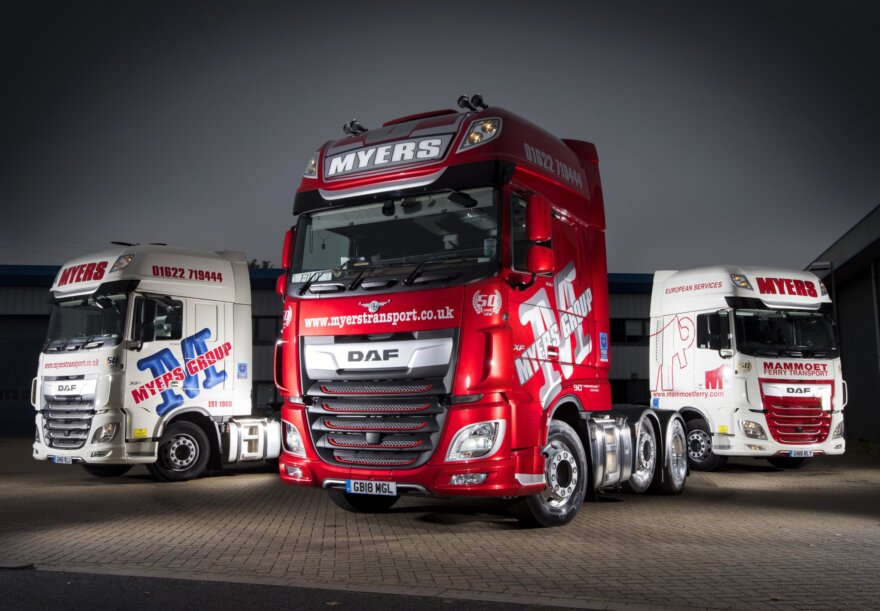 The trucks are in the special DAF 90th Anniversary colour choices; one in special metallic ‘Rouge Flamme’ red, the other two in metallic ‘Jamaica Blue.’ They join a two-marque fleet of some 65 tractors in which DAF vehicles occupy a full half share. The business has no trailers, specialising in the movement of inbound trailers from ports such as Felixstowe, on behalf of international trailer operators, moving them around the UK distributing loads and collecting exports-filled trailers for return to the docks.

The family-owned firm’s MD, Tony Myers, whose two sons Paul and Charlie also work in the business, said, “We all work hard, and business is very buoyant for us at the moment, so we thought we’d push the boat out a bit and invest in the three DAF 90th Anniversary specials. They will help us mark our own half-century and, just as important,” he said, “give us something that we can use to show our appreciation to three long-service drivers who have been with us many years.”

The operator, who has been buying DAFs since 1977, reported that build quality and fuel economy were the guiding factors. He said, “We like the DAF marque and have had it over the years, other than the very few times where we have been tempted elsewhere. But we keep coming back for the quality and reliability – you really can’t beat them. The products seem to get better and better,” he said, “and fuel economy has been noticeably improved with the latest XF range; the 530 engine we spec now is a tough one to beat.”

The firm already has six XF tractors in service, with only good things to say about their performance. The operator has recently cut the marques represented in the fleet to just two. Recent service support and product issues with one or two manufacturers have seen them exit the Myers fleet.

“We never say ‘never again’,” said Tony Myers, “but when it comes to things like dealer support, we have no hesitation in making these decisions. For us, as with any operator of our size and national work coverage, we need to know we are looked after. Channel Commercials, our local DAF dealership in Ashford, is outstanding. Credit where credit’s due, for me they’re an absolute benchmark in dealer support. And though we run a very young fleet, so don’t need it very often, I have to say emergency roadside-support doesn’t get any better than DAFaid.”

Myers Transport runs its DAFs into the Ashford dealership only for MOTs and any serious defect work. The rest of the routine maintenance is taken care of when Channel Commercial service vans attend Myers’ Aylesford depot every Saturday morning as required – often three fitters at a time when the firm is at its busiest.

The new trucks were acquired through PACCAR Financial, with whom Tony Myers declares himself, ‘very happy’. The company buys its trucks on three-year deals and maintains a very young fleet profile by selling them on at the end of that period.