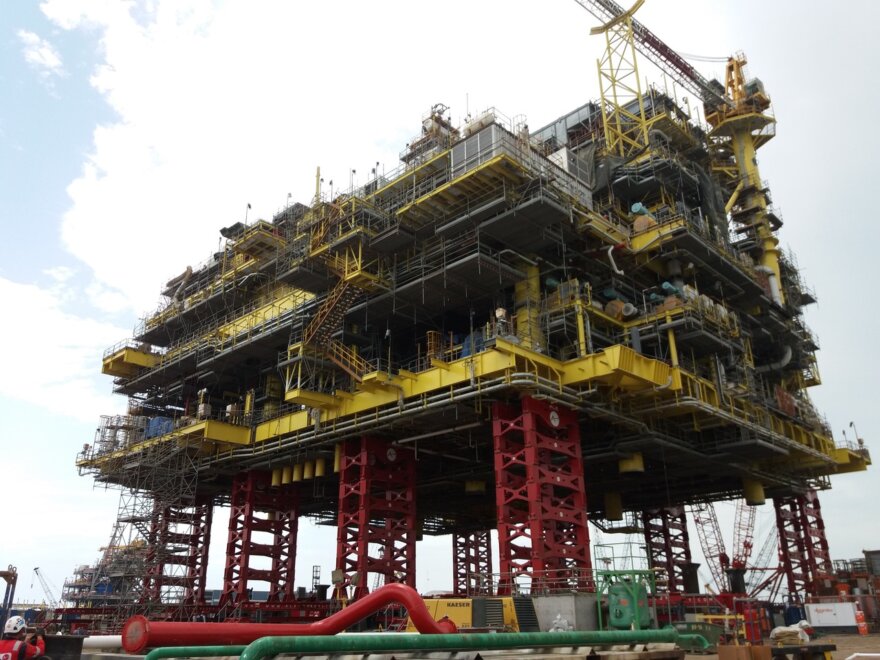 The time and cost efficiency of ALE’s Mega Jack system has been demonstrated while completing a 14m-high jack-up of a topside in Mexico.

As the Mega Jack had its own starter beams, extensive time and cost savings were made as the client did not need to fabricate temporary beams.

For a cost-effective load-out onto the barge, the topside needed to be jacked-up over 10m so it could be placed on the a specially designed desk support frame (DSF) for the load-out. The Mega Jack was the most viable option as limited site space meant they needed to avoid any disruption to other site operations.

The topside, weighing over 13,000t, was jacked-up to 14m high in stages. Upon reaching the first jacking phase 5.5m high, the client could access the forklifts under the topside, which was a major advantage as they could continue operations and optimise the project schedule. Once at full height (14m), the DSF could then be installed underneath and jacked-down ready for the load-out.

For the jacking operation, ALE configured the Mega Jack with eight towers, each with 5,200t capacity. This provided the strength needed to lift such a heavy weight whilst evenly distributing the ground loading pressure.

Teun Van Gorp, Project Manager/Engineer for ALE who specialises in the Mega Jack system, said: “It is fantastic to be involved in such a unique project. As the

Mega Jack is much more efficient than other systems on the market, with quicker assembly and jacking speeds, it provided a smart solution that saved time and overall costs.

“The Mega Jack was also a safer option for us operating in a busy site, as its inherent contingencies reduced the overall ‘critical operation’ and no working at height or welding connections were required. By using a world-leading jacking structure such as this, the client saved money by not investing in fabrication, which also gave them the long-term competitive edge. We are really happy with the achievements so far and are preparing for the next phase.”

This is part of a full offshore service contract where ALE is executing the weighing, jacking, load-out and installation of the topside, jacket and platform. The next stage will involve the load-out and the offshore installation, with all offshore operations expected to finish in October.