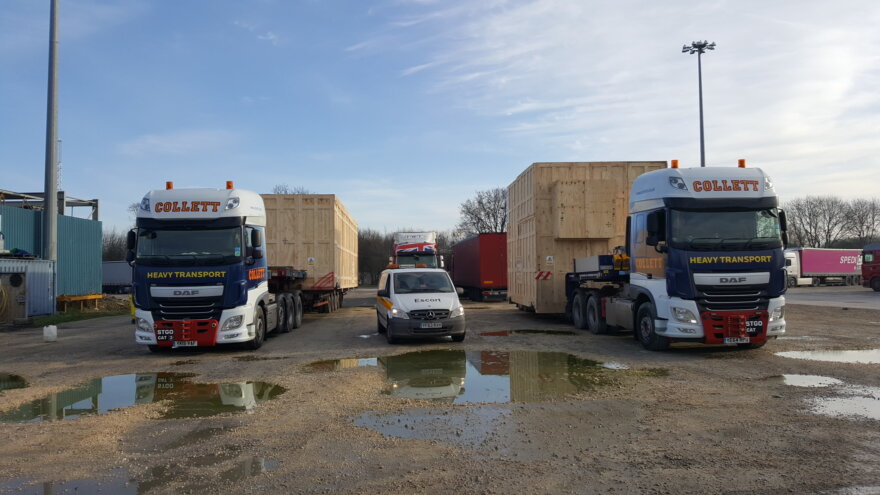 With three skid units each weighing in at 47Tonnes, 19Tonnes and 16Tonnes, Collett we’re appointed by Maloney Metalcraft to provide transport solutions for all three cargoes.

Originating at Whiteley Read Engineering, each of the cargoes would be required to travel 115 miles to the Port of Immingham for onward transportation. With the smallest of the loads measuring 4.65m in height and the largest 5.2m, significant planning had to be undertaken ahead of the move to ensure that each of the loads would safely make the journey unimpeded.

Our Project’s Team began with a visual route inspection, travelling the proposed route and gathering picture evidence of any sections which may obstruct the movement of the load. This included traffic lights, street signage, bollards, lampposts and railings which would have to be removed or altered ahead of the project taking place. Our Team also highlighted numerous overhead wires which, due to the overall loaded heights of each vehicle, would either have to be removed or lifted to allow for safe passage. After liaising with Rotherham County Council, Doncaster Metropolitan Borough Council, Nottinghamshire County Council and North East Lincolnshire Council a plan was in place to remove the street furniture which could prove problematic for the loaded vehicles. After discussions with BT Open Reach (33 cables alone were repositioned higher in the Rawmarsh Hill area of Rotherham) and Northern Power Grid it was agreed that the convoy would travel with cable lifting teams to raise any overhead lines as and where identified. Coupled with this our Team also employed the hydraulic capabilities of the trailers, lowering the deck height and allowing for the load to safely clear each of the raised cables along the route. The final addition to the convoy came in the form of a tree team. Although pre-pruning had been completed ahead of the move to a height of 5.63m, a team would also be in attendance for part of the route to ‘spot trim’ and remove any foliage which could potentially inhibit the movement of the cargo.

With all the preliminary work completed and under Police Escort the convoy began its 115 mile journey from Rotherham to Immingham. Utilising a 3-axle modular trailer with extendable beams, a 5-axle extendable stepframe and the newly acquired Faymonville 2-axle MegaMAX each of the loads made the journey from manufacturing point to portside. Over three days our Teams navigated the streets of Rotherham, Doncaster and Ollerton before arriving at Newark-on-Trent and joining the dedicated high loads route towards Immingham, with car AND motorcycle Police Officers from Northamptonshire, Leicestershire, Nottinghamshire, Humberside , Lincolnshire and South Yorkshire constabularies escorting across all three days!