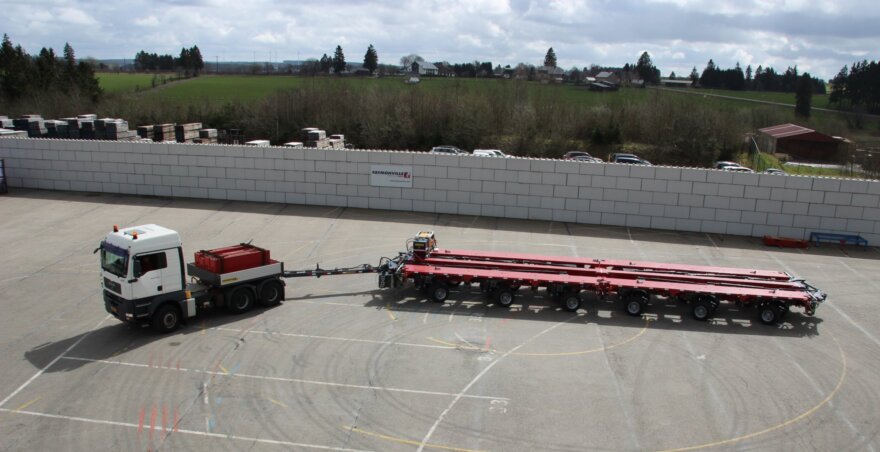 Faymonville presents its latest product, the DualMAX. This modular semi-trailer can be widened in loaded condition and was designed for the special requirements of heavy goods traffic in North America.

Faymonville once again highlights its role as an innovative pioneer in the sector. With the DualMAX, a vehicle type could once again be presented that combines cutting-edge technology with extremely practical development. This combination also impressed American Heavy Moving & Rigging Inc. from Chino, California. The transport company immediately equipped its vehicle fleet with 36 axle lines of the new DualMAX.

Some very specific features characterise this new product family. “All axles under load can be easily and securely widened from 14´ (4.27m) to 20´ (6.1m). We’ve baptised this unique and patented principle “lift&shift“. In this way the loading platform can be adapted to the size of the load or its distribution on the ground“, reports Paul Hönen, Sales Manager in North America. “In contrast to other suppliers, the steering system doesn’t need to be disassembled for the widening process, everything stays in place. And the tried-and-tested swing axle technology guarantees optimal manoeuvring“. The DualMAX meets the statutory provisions that apply in the USA and Canada.

High point loads thanks to the strong chassis

“Faymonville’s DualMAX has a very strong and torsion-resistant chassis with high point load capacities on the central beam and the outer frames“, notes company owner Earl Sutton, who found a competent partner in Faymonville. “At 10,000 pounds (4,535 kg)/axle line the DualMAX has an optimal payload to net weight ratio“. The flexible vehicle concept thus permits a load per axle line of 52,900 pounds (23,995 kg) at 50 mph (80 km/h).

The foldable frame (to less than 10´/3.05m) makes easy return transport possible on a conventional semi-trailer. The chassis of the DualMAX is fully metallised (zinc-plated), thus offering the best corrosion protection available on the market.

A total package that fits perfectly!

Besides American Heavy Moving, other transport companies such as Mountain Crane and Steve Sharp could already be won over as new DualMAX customers.