Deserved Winners of the 2016 ESTA Awards Announced at Bauma 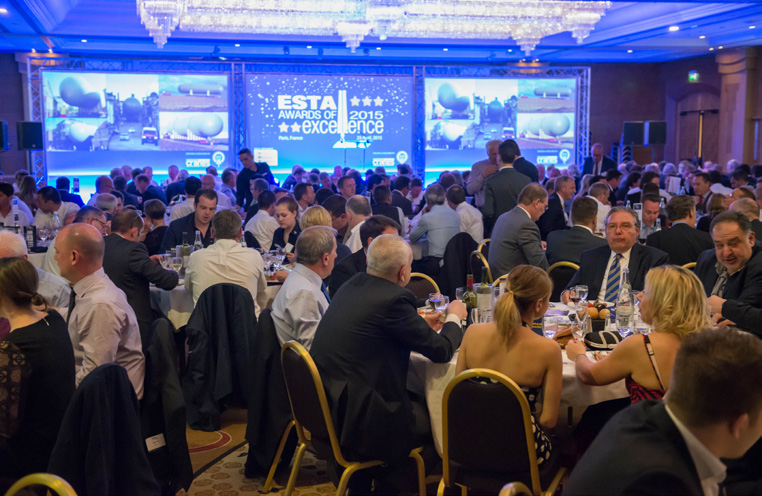 The winners of the 2016 ESTA Awards for lifting and transport were announced during the ESTA Users Night and Awards Dinner 2016, at the Hotel Bayerischer Hof, during the Bauma exhibition on 14 April.

The annual ESTA Awards of Excellence is the most prestigious European crane and transport industry event for all ESTA members, affiliated companies, end users and manufacturers working in heavy haulage, transport and the lifting industry.

The winners of the 2016 awards are as follows:

Mammoet Europe, Netherlands
Mammoet transported and lifted a 150 tonne reactor at the petrochemical refinery in Fos-sur-Mer, France. A new Liebherr LTM 1750 was used as the main crane along with a 600 tonne capacity tailing frame mounted on SPMT to lift it into position.

ALE, UK
For the Solan Oilfield Development Project, ALE was requested to perform the roll-up of two jacket frames with large and abnormal dimensions. The jacket was 10,415 tonnes and the topside weighed 5,315 tonnes.

Friderici Special, Switzerland
A 43.5 tonne Siemens transformer was transported from its factory to a power station in Saas Grund, Switzerland, by Friderici Special overcoming the obstacle of a bridge limited to a load of 7.5 tonnes. A fly-over bridge was engineered using a Liebherr LTM 1220-5.2 mobile crane.

Wagenborg, Netherlands
A new composite 45 tonne bridge part was transported by Wagenborg in one piece from the fabrication yard in Rotterdam to the construction site. A solution was developed to transport the cargo in an upright position through the city centre of Utrecht.

Liebherr-Werk Ehingen, Germany
The LICCON 2 controller is a user-friendly automatic system that allows luffing lattice jibs to be erected easily. It reduces the control complexity, which relieves the strain on the driver and ultimately means enhanced safety.

Fagioli, Italy
Four MSC cruise ships required enhancement, including the installation of a 1,997 tonne section and skidding of a 13,750 tonne bow section. Fagioli spent 11 weeks on each cruise ship using 22 skid shoes (each with 1,000 tonnes capacity) and 80 axle lines.

Nooteboom Trailers, Netherlands
The Manoovr is the latest multi-PL semi loader for abnormal transport. Similar low semi-trailers have a rated load capacity of no more than 9 or 10 tonnes per axle, the Manoovr has 12 tonnes. It has a floor height of 780 mm without losing load capacity.

Fagioli, Italy
Fagioli was contracted for the transport and installation of an 882 tonne railway bridge in Bologna, Italy. The operation – using SPMT – was divided in several steps due to its complexity and the need to close the roads several times during the three nights required for the installation.

Personality of the Year