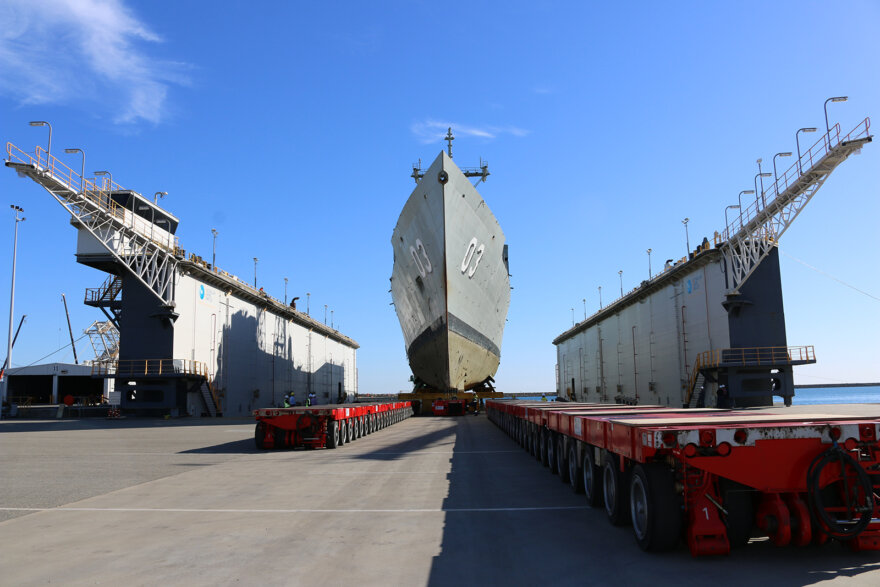 On 12th June 2017, Ex-HMAS Sydney was docked at the Western Australian Government owned Australian Marine Complex Common User Facility (AMCCUF) in Henderson, Western Australia. AMC Management, the Facility Manager and Floating Dock Operator, relied on Scheuerle Self-Propelled Modular Transporters (SPMT) for this difficult task. After travelling 959,627 Nautical Miles during 32 years, the Ex-HMAS Sydney with a displacement of 4.100 tons was ready to be replaced in the context of a general fleet makeover by the Australian government .This was no standard docking procedure: The disposal process required the ship to be as close to the ground as possible so the ship was transferred from the floating dock to the hardstand with only 200mm clearance from the bottom of the rudder to the ground.

Ex-HMAS Sydney was decommissioned from the Royal Australian Navy on 7th November 2015 and had been laid-up in Sydney until 18th May 2017 when she departed for the tow to Henderson where she arrived on 8th June 2017.