LEONARD LOOIJENGA PRESENTS THE HIGHLIGHTS FROM THIS YEAR’S ENORMOUS BAUMA SHOW IN GERMANY.

Bauma is the leading trade fair for construction machinery, vehicles and equipment and takes place every three years in Munich. The latest exhibition in early April was a record-breaker, with over 3,400 exhibitors from 58 countries and some 580,000 people from 200 countries visiting the seven-day event, which covered over 600,000 square metres.

Part of the attraction of Bauma is that as a global show, it lets exhibitors show products aimed at worldwide markets, not just the European one. And that means you’ll often see new manufacturers there from upcoming markets like Turkey, as they look to expand their horizon. In short, you’ll see equipment on show at Bauma that you just won’t find anywhere else.

In terms of modular equipment, the most exciting displays this year were by Goldhofer and the TII Group (Scheuerle, Nicolas, Kamag and Tratec), both of which used the show to introduce new self-propelled modular trailers that can reach speeds of up to 80kph, allowing operators to carry out large jobs with just one tractor.

TII’s offering is a fresh version of its Scheuerle-Kamag K25 PB incorporating its new PowerBooster, a unique 1,000hp power pack. Goldhofer’s product is the ADDrive, a self-propelled trailer with similar credentials. The advantage of both is that you don’t need a pusher or second tractor on steep inclines, as the power pack is sufficient to drive the trailer axles on its own. That means that to carry out loading and unloading, you just have to unhook the tractor and remotely control the trailer, which lets you manoeuvre the load into or out of the tightest of spots. Other self-propelled modular trailers were also on show at both Cometto and Faymonville.

Another eye-catcher at this year’s event was the ‘Faktor 5’ girder bridge on Goldhofer’s stand. It’s called that because the bridge can carry five times the dead weight of the empty trailer, with payloads up to 650 tonnes. This particular one had been bought by a company in South America.

At the ‘lighter’ end of things, a number of products on display at this year’s event showed that the boundaries between conventional and modular trailers are fading: ten-axle stepframes, for example, just didn’t exist until a decade ago and the same is also true of the three bed six lowloader. Such trailers not only exist now but are offered by several different manufacturers.

The Faymonville CombiMax fits in the same category: it is a modular unit that can be used as a conventional lowloader or as an extendable stepframe trailer, giving the operator the opportunity to optimise the use of the running gear – an ideal solution for many smaller operators who need flexibility and cannot afford to have dedicated modular gear lying idle in their yard.

Prominent on the Nooteboom stand was a large version of its Manoovr semi-lowloader with ten axles, a trailer suitable for gross weights up to 150 tonnes at 80kph, including 30 tonnes on the fifth wheel coupling. Also worthy of mention was its fixed Interdolly, which is integrated into the neck and results in a shorter and lighter trailer.

Several trailers of interest were on show on the Broshuis stand, including its answer to the Manoovr: a trailer with the same deck height, but more ground clearance. Also shown there were its second generation SL trailers (SL2), available in four and five-axle versions for 12-tonne axle loads in most European countries. Reflecting a trend for operators to go back to using stepframes with deck heights of under a metre to move counterweights for cranes because of new health and safety regulations, meanwhile, on display were stepframes manufactured for Mammoet and Whyte Crane Hire.

Elsewhere, DOLL’s stand featured two different versions of the optimised panther 1+3 axle lowloader with fixed dolly. Both were equipped with a new system to adjust the fifth wheel pressure electronically.

A hydraulic cylinder installed in the gooseneck can be lifted or lowered, so that the correct axle loads for three and four-axle tractors can be set. The firm was separately highlighting its DOLLtronic electronic control system and the DOLL steering system, both of which it will make available to other vehicle manufacturers under the DOLL Steering System brand.

Over at Kassböhrer, an eight-axle stepframe trailer was generating a lot of attention. So far, Kassböhrer has only present at the lighter end of the market but this trailer certainly showed its intended direction for the future.

De Angelis, from Italy, presented a very well built two-axle lowloader for railway equipment, meanwhile. This trailer was fitted with its new independent suspension system, marketed under the Solo Handling Solutions brand and also being made available to other manufacturers. And last, but by no means least, Spanish firm Rojo was showing off a two-axle lowloader with pendle axles. Its overall line-up incorporates a host of different trailers, from a basic three-axle stepframe to a three bed six lowloader, to mention just two. 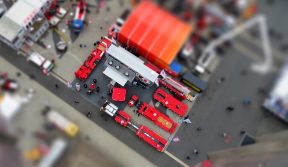 Highlights from the German show, which, once again, proved to be the perfect platform for innovation 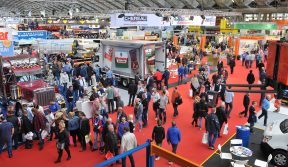 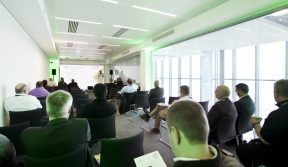 The LEEA’s annual exhibition – and conference – included some interesting pitches 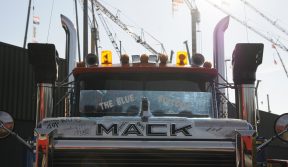 36 years ago, Willem Kuiper started a Mack Show on the streets of his home town, Abcoude. Now it’s a sell-out next to the Amsterdam Arena