Senior members of ESTA – the European Association for abnormal road transport and mobile cranes – are making renewed calls to European Union states to reduce the heavy transport industry’s paperwork and bureaucracy and adopt SERT – the Special European Registration for Trucks and Trailers.

SERT is meant to be a ‘one-stop-shop’ for the heavy transport industry and replace the plethora of different national documents that exist, while at the same time giving the permit-granting authorities all the information they need. But ten years after it was launched, and despite the support of the European Commission’s transport directorate, only the Netherlands has fully adopted the SERT proposals to date.

Research carried out by ESTA in 2012 revealed that complying with different cross-border permit regulations costs the industry a staggering €500 million a year. ESTA believes that a more efficient system would cut the cost by half. Currently an estimated €240 million is paid every year to various national transport authorities for permit fees –income which they are presumably reluctant to give up, but which the heavy transport industry regards as a serious impediment to cross-border trade.

SERT forms a key part of the European Best Practice Guidelines for Abnormal Road Transport, first published by the European Commission’s transport directorate, which received the approval of the EC’s road safety authorities back in 2005. The issue was raised again at a recent dinner held by the Dutch department of road transport (RDW) by ESTA’s transport vice president, Wim Richie, who is, himself, a former RDW senior policy officer.

The RDW dinner marked the tenth anniversary since the SERT document was adopted by the Dutch authorities. “The advantages of SERT are obvious – for every vehicle there is only one document needed to give all the necessary information,” says Richie. “What’s more, the SERT document is a very effective way of registering modular trailers – that is, trailers that can be put together in different combinations even when different manufacturers are involved.”

David Collet, ESTA president and managing director of Collett & Sons in the UK, adds: “ESTA regards itself as representing all of Europe, but European borders still represent huge obstacles for internationally operating hauliers and, as such, form a protection barrier against competition.”

Writing at the time in support of the proposals, the then European Transport Commissioner Jacques Barrot, clearly agreed. “International transporters are confronted by a panoply of rules and procedures, for instance on vehicle escorts, the timeframes allowed, authorised speeds, and so on. This varies from member state to member state or sometimes even from region to region,” he said. “Often, this results in delays and make it difficult for carriers to make precise cost calculations or to meet their contractual obligations to shippers and customers.”

After a decade, little has changed, despite the European Commission’s actions. Privately, some in the industry wonder if SERT and the best practice guide are a small victim of a declining interest in trans- European cooperation.

Picture below: Finnish firm Silvasti transports a wooden bull called Woima by well-known artist Miina Äkkijyrkkä. The bull had to be moved 250km to its new home.

This year’s ESTA Users’ Night and Awards has attracted the highest-ever number of entries. A total of 73 projects from around Europe were submitted by the end-of-January deadline and are now being considered by the jury. The shortlisted finalists will be announced in March.

The eventual winners will be revealed at the awards dinner itself, which this year takes place on the evening of Thursday, 23rd April in Paris, during the Intermat exhibition at the Hilton Charles de Gaulle Airport. The awards are run jointly by ESTA and International Cranes and Specialized Transport magazine.

ESTA has members in eighteen countries across Europe, and the awards ceremony and dinner attracts top companies both from Europe and key international markets. In recent years, the awards have become established as one of the key dates in the industry’s social calendar as well as an opportunity for clients, rental companies and manufacturers to meet informally and discuss issues of mutual interest.

Wim Richie, ESTA’s transport vice president and Awards jury co-ordinator, says: “The response we have had shows both the high quality and innovative work being carried out by ESTA’s members – often in very difficult circumstances – while at the same time ensuring that safety is the top priority.”

“We are absolutely delighted with both the quantity and quality of this year’s entries, and we look forward to receiving even more in 2016.”

For further information, or to make sure of your place at the European industry’s most popular event, go to www.esta-eu.org or www.khl.com/events.

ESTA is to recruit a transport officer to help raise its profile and expand the activities of its transport section. This new position is a paid post and the successful candidate would ideally be multi-lingual. The priority of the new officer will be to grow membership and contacts, especially in new markets where ESTA is not currently represented.

The president of ESTA’s transport section, Andre Friderici, says: “ESTA is becoming too big, and the workload becoming too heavy to rely on volunteering.”

To find out more, or to apply, please contact Caroline van Geest of ESTA at officemanager@esta-eu.org. 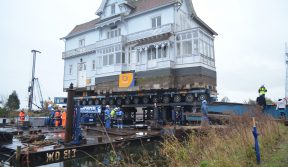