ABNORMAL LOADS AND THE VEHICLES THAT CARRY THEM AREN’T IMMUNE FROM ACCIDENTS, INCIDENTS OR BREAKDOWNS. FORTUNATELY, THERE ARE COMPANIES SUCH AS HOUGH GREEN AROUND TO ACT AS KNIGHTS IN SHINING ARMOUR. JOHN CHALLEN REPORTS.

The heavy haulage sector is no stranger to specialist vehicles. But when a Kenworth T800 equipped with a whole load of rescue equipment is coming to get you out of a hole – sometimes quite literally – it is a sight to behold. Two of these mighty beasts live among a selection of workhorses in the stable of Hough Green, whose fleet totals more than 40 recovery vehicles.

Resplendent in bright red – some might say ‘fire engine’ red – the Hough Green vehicles have previously been dubbed a ‘fourth emergency service’ by some of its clients. It’s a comparison David Farrell, recovery operations manager at the firm, takes to heart, happy that his customers appreciate the job his team and his vehicles carry out.

Hough Green is a North West-based recovery company with a mixed fleet, the jewels in the crown being the two Kenworth T800s and its latest XF from fellow Paccar brand DAF, which joined the fleet in 2015. All are regularly called upon for general recovery work, but what really sets the two T800s aside from all their stablemates is their ability to help out when the bigger vehicles get in trouble, whether it’s retrieving trucks from ditches, moving fire-damaged cabs, trailers and rigids, or just generally sorting out the mess that accidents and incidents tend to leave behind.

THE SHAPE OF RECOVERY

Hough Green currently has over 120 staff across nine depots, with a fleet of over 110 vehicles throughout the north west and north Wales. The region covers Preston to Stafford north to south and Llandudno to the west. “In the last six or seven years we’ve had major expansion within the company,” says Farrell. Having opened two more depots via acquisitions in November last year, he expects more sites to follow.

“We were established in 1984 by my father, Dave, and his brother,” says Farrell. “We’ve come a long way since running purely as a garage doing breakdown recovery and repairs…”

The current fleet includes a wide range of vehicle sizes, from a 3.5 tonner right up to the Kenworth lowloaders. “Brand-wise, it is varied, because we have to be seen to be using the products of the customers we are towing,” adds Farrell. But for heavy trucks, he says, the firm has always tended to opt for DAF.

“The XF was the first heavy truck we bought new in 1995 and we’ve favoured them ever since – we like them a lot,” he confirms. “When we purchased our new Euro 6s, we ordered four heavies and DAF was always on the list.

Before things changed with the introduction of Whole Vehicle Type Approval, the firm use to get Pioneer axles fitted to its heavy trucks, for their excellent lifting capabilities. “You’d order a four-wheel DAF with heavy haulage spec and send it to the bodybuilder, who would add the Pioneer axle on 19.5in wheels to give it greater lifting capability,” recalls Farrell. “Type approval put an end to that but one of the selling points about the DAF is that it offers a 25-tonne unit, which is the minimum requirement for police rescue vehicles and others. DAF is the only company that will do a factory-fit 25-tonne bogie.”

For the regular lift-and-shift work, the DAFs tend to be deployed. “They do have recovery capabilities, with rear stiff legs and twin winches, but the XFs are predominantly built for day-to-day jobs up and down the country,” he says. When haulage vehicles get stranded, however, it’s the two Kenworth T800s that swing into action.

“The first one came because I’ve always loved American trucks,” says Farrell. “You could park the flashiest regular truck on the road and it would just look run-of-the-mill next to a Kenworth. The American styling – which just isn’t seen much over here – has great presence and is a fantastic marketing tool.”

The latest of the two is kept busy with rollovers – anything up to two a day is normal for KW64 TOW, he tells us. “It is designed as the recovery vehicle for accident work and rescues trucks that are in a ditch, or burned out, or very damaged,” says Farrell. “It does less lift-and-shift work though it can do that too, if required.” Specialised trucks need specialised kit, of course, and Hough Green has adopted a no-expense-spared attitude in ensuring the two Kenworths have the optimal kit for rescues.

“The DAFs still have the Boniface rotator on the back but the Kenworths have Miller’s own Century 1075S – a 75-tonne rotator which is a specific American product,” he explains. “It’s not built here and if you want it on a European chassis, you have to have it shipped over.

“When we got the first truck, we found out that you pick everything on a Kenworth and the level of detail is amazing – you really are buying the complete package,” he continues. “We went to the US to buy the first truck after seeing it at the Florida Tow Show. It was the first one with underslung legs and the only way they would sell it was if it went overseas.” Originally, the firm thought its latest T800 would replace the first one, but in the 12 months between order and delivery the company had expanded and had so much work that it just couldn’t afford to let the first one go.

“It’s not just about the look of the T800 – they really do get the job done,” comments Farrell. “The public would look at the front but people within the industry would look at the equipment on the back – a 75-tonne rotator that is designed to lift 44-tonners on its own or retrieve vehicles from a ditch. The new addition is the only one in the country with the bigger legs, which means it lifts even better than our 2008 one.”

One day, admits Farrell, there will be a change and the older T800 will have to make room for a replacement – hopefully another one. “We are working with Kenworth and Boniface at the moment,” he reveals. “We think we’ve got around some issues, but there is still some way to go.” In the meantime, HeavyTorque salutes this hardy recovery operator for some fantastic looking trucks that do an equally fantastic job. 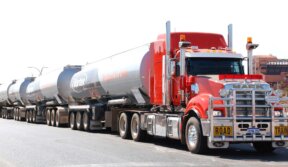 Ever wondered about the heavy haulage industry in Australia? Well, wonder no more 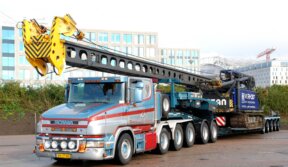 Comparing heavy transport operations in mainland Europe and the UK 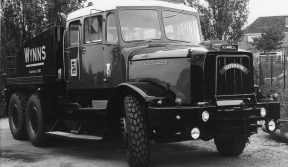