A few weeks ago I heard the very sad news that one of the industry’s true gentlemen, John De Mulder, had sadly passed away.

I first met John over 40 years ago when I did a deal with him to purchase a truck and trailer (I’m afraid my memory fails me as to which ones they were). Immediately, we formed a friendship. Over the years when I needed to source various pieces of heavy haulage equipment, John would be my first port of call. He knew the equipment better than anyone I know, therefore his expertise and advise was invaluable. His reputation for sourcing world-wide specialist equipment was difficult to match.

Over 30 years ago I decided to set up a joint venture haulage business in Saudi Arabia. The equipment required over in the Middle East was specific and specialised and of course, there was only one person to contact, John! We had a few meetings, I provided him with a breakdown of our requirements, and needless to say he came up with the goods. A lot of our equipment for the initial setup for the business came from John.

There have been many deals with John over the years, far too many to mention. Although, one that does stick in my mind, was three 200-tonne Volvo tractor units which were sold on to a company in Kenya. The last deal that John and I did was early this year (2017) and it was for a five-axle trailer, 42m long.

Over more recent years our professional relationship became more of a friendship. At least three out of four Saturdays a month I would drive down to John’s yard where we would have coffee and attempt to put the world to rights. In all honesty, we would do a lot of complaining and moaning about things that were wrong in the haulage industry – that’s what you do when you get older!!

Of course John had worked alongside Pat his wife for many years. My deepest sympathies and regards to Pat at this very sad time.

Unfortunately, as most people know, John’s health hadn’t been great over the past few years, having to endure the daily dialysis, but nevertheless he carried on with business just as he always had. What a commitment!

I feel honoured and privileged to have done business with John spanning almost half a century but more importantly I am so very grateful for the true friendship that had evolved until his unfortunate and untimely death.

John will be sorely missed by all but he will always be remembered for his great knowledge and fairness within the transport industry. A true Gent!

Our thoughts are with John's family and friends. RIP xx 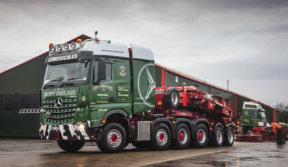 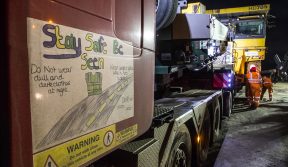 HUTCHINSONS: BE SAFE, BE SEEN

Hutchinson Engineering Services takes its road safety message into school and provides a fun day for the children, while making them aware of just how dangerous it is to get too close to big trucks. 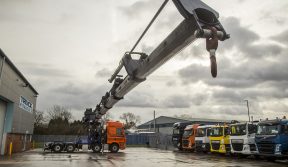 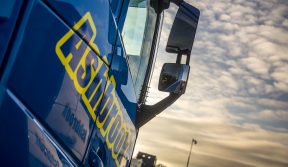 JK Ashbrook has grown from a plant hire company to become one of the leading heavy hauliers in the North West.