ON THE DAY THE RAI COMMERCIAL VEHICLE SHOW OPENED ITS DOORS IN AMSTERDAM, A TWO-MAN MAMMOET TEAM WAS BUSY AT AN INDUSTRIAL ESTATE IN COEVORDEN, THE NETHERLANDS. IT WAS THE FIRST JOB FOR THE NEW NOOTEBOOM MANOOVR TRAILER AS LEONARD LOOIJENGA REPORTS

A manufacturer of prefabricated houses was doubling production capacity – from one to two complete houses per week. Because of this they decided to update their logistics as well. It turned out relocating of one of the big machines would optimise the internal material flow. There was only one problem. How to move the machine, measuring (L) 20m x (W) 2m x (H) 5m, within the building?

Three options were considered. First, dismantle the whole machine, move the bits and pieces, and assemble it again. This would be very time-consuming and therefore expensive. Another course was to lose two doors and increase the height above the door-openings by removing wall panels: this method was rejected as well because of its high costs. The third option proved to be the best.

Move the machine in one piece – within the building – using Mammoet’s new Manoovr trailer.

With the help of two overhead cranes the 50t piece was soon loaded onto the Manoovr trailer. Because of its high gravity-point, securing the load accurately was an important task for the Mammoet men. During the loading process a small team of mechanics got busy dismantling a cable tray – to create enough clearance for the high load.

Preparations finished, it’s time for the move. The job looks very simple – track 10 metres ahead, take a 90-degree turn, then go forward another 20 metres. However, the whole outfit has a length of nearly 28 metres with a weight of over 80 tonnes. And space in the building is limited, especially on that right-angled turn, because of pillars supporting the roof. Yet minutes later the load is parked at the unloading point – in the other half of the building. Thanks to the trailer’s exceptional steering this job was simple indeed. The driver needed to reverse just once – only a few metres – to make that tight turn between the pillars.

The unloading turned out a little more difficult than expected. As the machine was rotated 90 degrees, spreaders were ready to unload it with the help of another two overhead cranes. Because the main beam of one of the overhead cranes was slightly thicker than the other, there was just not enough ground clearance to use them. Fortunately another, thinner spreader was found.

By lowering the trailer behind the neck and using the thinner spreader, both 4-inch thick support beams (needed to secure the load at the correct angle) could be moved out of the way. After this hurdle, the machine was soon air lifted to its new destination. A second, smaller piece was moved afterwards, using the building’s existing doors.

It was an impressive debut for the new Manoovr trailer. Mammoet driver Berend Top said: “I’m very excited about the possibilities of the Manoovr. The steering-angles, especially in combination with the very low deck height, make it the ultimate lowloader for many jobs. Even compared to its previous MCO PX series – which I rate highly – Nooteboom has taken huge steps forward. Another strong point, in my view, is the simplicity of the design. If you see how it is done, you wonder why no one came up with the idea before.”

All this while, in Amsterdam, the Nooteboom Manoovr won the Innovation Award 2015 at the RAI show…

Enjoyed the read? Here's a few more we've cherry picked for you! 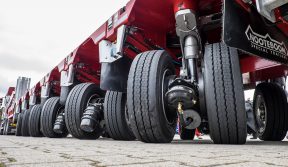 How low can you go? Refining axle-loadings, and why pendle axles beat independent suspension 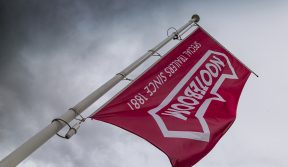 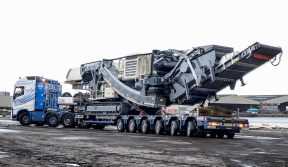