WHEN THE BOAT COMES IN

BUILT IN 1894, THE EXPERIMENTAL STEAM LAUNCH TURBINIA, IS AN INTEGRAL PART OF MARITIME HISTORY AND WAS ONCE THE FASTEST SHIP IN THE WORLD. HOWEVER, ON THREE OCCASIONS IT’S BEEN MOVED AT A SNAIL’S PACE BY ROAD, AS JON HARLE REPORTS.

As a publicity stunt, it was audacious, but brilliant. In 1897, Tyneside engineer Charles Parsons wanted to show off his steam turbine-powered vessel, Turbinia. Where better than the Navy Review as part of the celebrations of Queen Victoria’s Diamond Jubilee at Spithead? But he hadn’t been invited! So Turbinia gate-crashed the party, steaming in and out of the Navy’s ponderous warships at unprecedented speeds of 35 knots, and easily escaping from the Navy picket boats that were sent out to apprehend it.

But the Navy had seen enough, and soon ordered new warships powered by Parsons’ innovative engines, including the revolutionary HMS Dreadnought. Operators of merchant vessels were similarly impressed. Thomas Ismay, president of the White Star Line, was invited on board Turbinia, and Cunard’s RMS Mauretania, at the time the world’s largest ship, was launched on Tyneside in 1906. Parsons’ turbines allowed it to claim the Blue Riband for the fastest crossing of the Atlantic Ocean, a record she held for twenty years.

In 1907, Turbinia was badly damaged when the launch of another ship went wrong. It was repaired, but was lifted out of the water the following year. The historic vessel languished on Tyneside for nearly 20 years until the directors of Parsons Marine Steam Turbine Company asked curators at the London Science Museum if they would like to exhibit it. They were keen, but didn’t have enough room to display the 104-foot-long, 45-ton ship. So they decided to cut it in two, and in 1927 the stern section, incorporating the innovative propulsion system, was taken by coaster to London. They then used a traction engine with a pair of solid-tyred bogies to move the 45-foot-long load through the streets of London to the museum.

Pictured below: Turbinia’s stern section being moved by traction engine from London Docks to the city’s Science Museum in 1927, the first of three road movements for the world’s fastest ship.

In 1959, the Science Museum decided they no longer had the space for their half of the ship, so the decision was taken to transport it back to Tyneside. This time, it was moved the whole way by road. By today’s standards, it wasn’t that big a load, but it was still quite an undertaking for Pickfords Heavy Haulage in the days before motorways, and when the Great North Road passed through the centre of several cities. They used a ballasted Scammell Highwayman tractor with a pair of bogies, although this time the bogies were fitted with pneumatic tyres. The trip took five days to complete.

The stern section of Turbinia was reunited with the bow section, which had stayed on Tyneside, and the complete vessel went on display in a purpose-built museum extension in Newcastle’s Exhibition Park.

In 1994, 100 years after the ship’s launch, the curator of the city’s new Discovery Museum decided Turbinia should take pride of place. At first, it was assumed the vessel would need to be cut in two again to fit it into the 100-year-old former Co-operative Wholesale Society building that houses the museum. But after discussions with Pickfords Industrial, and a lot of careful measuring, engineers realized that it would be possible to move her in one piece – just.

“We had many a site visit,” says George Nairn, who was the assistant manager at Pickfords’ depot in Birtley, on Tyneside. “The first problem we were going to have was getting the vessel onto a trailer. It was in the middle of Exhibition Park, and there was no way we could get a crane in there. Engineers had to construct a special steel cradle to carry the ship, and the building that had housed Turbinia for 35 years had to be demolished around it. We also had to lay about 500 metres of Trackway across the grass to get our vehicle in and out.” Pickfords used a six-bed-six Nicolas modular trailer, hauled by their 250-tonne GTW Volvo F12 ballasted tractor. It was a lot of axles for not much weight, but importantly it significantly reduced axle loadings on the soft ground.

Using manual jacks, Turbinia was slowly lifted until the trailer could reverse underneath, and then the Pickfords crew used the trailer’s hydraulic system to take the weight of the load.

Police had insisted on the actual road movement taking place on a Sunday, because the five-mile route included going the wrong way up part of Newcastle’s Central Motorway, which a few weeks earlier had witnessed the start of the 1994 Great North Run. The vehicle then had to go the wrong way round the usually busy Cowgate Roundabout, to avoid a low bridge, before heading back towards the city centre. The authorities also had to choose a day when Kevin Keegan’s high-flying Newcastle United weren’t playing at home, because the load had to drive right past St James Park.

Sunday October 30 was a horrible day for the move. It was pouring with rain, but there was something of a carnival atmosphere as hundreds of Geordie onlookers watched the extraordinary sight of a historic ship trundling slowly along their city’s streets. John Clayson, who’s now the Keeper of Science and Industry with Tyne and Wear Museums and Archives, was one of those who walked alongside the convoy. “It was an anxious couple of hours,” he told me. “It was a massive load, but very delicate and very valuable. The funnel was the highest part of the load, and the crew had to make sure it wasn’t damaged by overhanging tree branches. But getting it to the museum entrance was the easy bit. Getting it inside was the hard part.”

Nairn from Pickfords was equally nervous. “We’d already had a tree removed outside the museum to give us room for the manoeuvre,” he recalls. “We had to reverse the trailer through a narrow gateway before we could take Turbinia off, and then spin her by hand through about 45º before skating her to her final position. We’d carefully measured the access door, which faced an old office building, and made a scale model, so we knew it was going to be tight. But, boy, was it tight!”

No pressure, then, for driver Quinton Wight who had the responsibility of reversing the 12-axled trailer, watched by hundreds of curious onlookers. “There was one woman in the crowd who wouldn’t stop telling us what to do,” Nairn told me. “She kept saying helpful things like ‘you didn’t want to do it like that, you ought to do this.’ It took me all my self-control not to give her the keys to the Volvo and let her do it herself!”

Steersman Peter Nassau remembers it all vividly. “It was the kind of job where a self-propelled modular trailer would have been ideal,” he says, “but there weren’t many around in those days.”

Once the crew had got the vessel as close to the entrance as possible, it was ‘bridged’ off, using the trailer’s hydraulics again, then lowered to the floor, which had been specially strengthened with a steel frame in the basement. Only about another hundred feet to go, and it was all going to be by hand from now on.

“I’d followed this load every inch of the way from Exhibition Park,” John Clayson from the museum recalls, “but there was literally about one inch to spare as Turbinia was turned prior to being dragged into the building. I’ve got a photo of the bow almost touching the window of the office block opposite the entrance.”

Using skates and Tirfor winches, the launch was carefully pulled into the museum. Steel plates had to be laid over the wooden cobbles which dated back to 1899 when the building was first opened as a warehouse. The hull was lined up with the supports protruding through the floor from the specially constructed frame in the basement. At last, Turbinia’s final journey was over, and she’s now the first exhibit visitors to the museum see as they come through the door.

Those visitors can read about the ship, and her importance, and imagine her needle-sharp bow cutting through the waves at the Spithead Review more than a century ago. But I suspect few of them look at the museum entrance and wonder how they got her in there!

Enjoyed the read? Well, there plenty more great content in Issue 17 to whet your whistle! 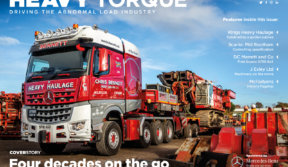 With over 150+ pages of fantastic content, what more can you wish for? HeavyTorque, Britain's best loved specialist transport title 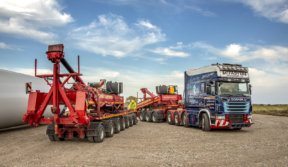 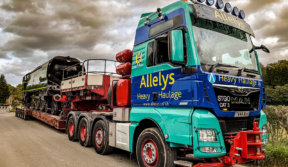 CAPTURE OF THE QUARTER 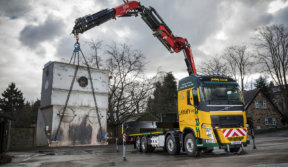 J Exley uses its fleet of lorry-mounted cranes to specialise in the demanding installation and removal of expensive machinery.