ALE Transport has carried a 75m wind turbine blade from the Siemens production facility through Hull’s winding streets to Queen Victoria Square as part of the Hull UK City of Culture programme. The 3.5-mile operation took place under the cover of darkness on self-propelled modular transporters and bolsters.

Once in position, it was mounted on specially-constructed supports. At the highest point it is 5.5m from the ground – allowing double-decker buses to pass under the tip of the blade. It is believed to be the first time such a huge industrial structure has been manoeuvred into a city centre to be displayed as a temporary art installation.

Called ‘Blade’, it is by multi-media artist Nayan Kulkarni, who reinterpreted the wind turbine blade as a monumental sculpture. It is the first artwork in ‘Look Up’, a year-long series of artist interventions in public spaces commissioned by Hull UK City of Culture 2017, which aim to make people look at and experience the city in new ways. “By declaring the blade to be a work of art, we’re changing it,” says Kulkarni. “It’s no longer a functional object – it does other things and has different values. As both a turbine blade and a ready-made sculptural work of art it is beautiful. It’s an astonishing challenge to move something of this size into the city centre.”

The blade was applauded into position by a welcoming party of 200 workers from the Siemens factory, reflecting the pride of the workforce that the product they create will be seen by tens of thousands of local people and visitors to the city. “We’re hugely excited to have worked with Nayan Kulkarni and the City of Culture team on this dramatic, unique installation,” says Siemens UK chief executive Juergen Maier. “This collaboration reflects our desire to make a positive impact as a Hull UK City of Culture 2017 major partner. ‘Blade’ brings to life the engineering and manufacturing excellence of which we are so proud and makes it tangible for the people of Hull and visitors to the city.”

Moving and installing the blade took over a year of planning, involving Hull City Council, project consulting engineers Arup and the Police. “This was a unique challenge. We have never before moved a structure of this size into a city centre along such narrow streets,” says Dave Smith, ALE projects operational manager. “We’re delighted to have been entrusted by Siemens to take the blade on its journey into the city centre and to have lifted it into position where it will take pride of place during the City of Culture celebrations.” The blade will remain in Queen Victoria Square until March 18.

ALE is currently working on a four-year crane framework agreement for Siemens for the supply and deployment of cranes, specialised transport equipment and personnel at Siemens’ new offshore wind facilities in Hull.

Enjoyed the read? Well... here's a few more features we've cherry-picked for you! 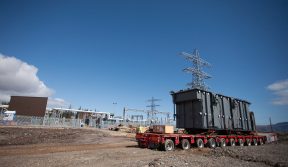 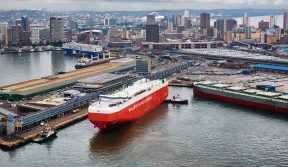