IT’S A NAME THAT HAS ALL-BUT DISAPPEARED FROM THE COMMERCIAL VEHICLE AND TRANSPORTATION INDUSTRIES, BUT FOR A LONG TIME, SCAMMELLS RULED THE ROADS. JOHN CHALLEN FINDS OUT MORE ABOUT ONE OF THE COMPANY’S FEW REMAINING RUNNING MODELS

One look at the launch issue of HeavyTorque – specifically a story about the movement of a regenerator for an oil refinery in Cheshire – was enough to prompt a telephone call from Willson and Wilding Ltd, now the proud owners of one of the vehicles that appeared in that feature. The Scammell Contractor MKII – produced in the late 1970s – has led a eventful life, being involved in a number of jobs such as the oil refinery one. Today, it spends most of the time in its own warehouse in Pontypool, occasionally venturing out to commercial vehicle shows.

One of its next appointments will be on 27 March where the iconic vehicle will make an appearance at The Heavies. Ahead of that, and by way of an introduction to the MKII that many people will see in the metal at Bruntingthorpe, it is only right to fill in some of the back story.

Robert Willson, owner and managing director of Willson and Wilding – a company set up in 1977 and now running an ATF and concerned with commercial fleet repairs and maintenance – is a big fan of Scammells. Having owned many in his time, when ‘RWO 73R’ came up for sale in 2000, it was too good an opportunity to pass up. “Econofreight/ Brambles wanted a lot of money for it and, at the time, it was in a bit of a state,” admits Willson. But it was running, so we paid the money and ended up with the goods.”

Leaving the Watford factory before its first revenue-earning run from Stafford to Manchester in 1977, 540 tonnes all up!

“One of the engineers at Econofreight knew John Wynn and his association with Scammells in Newport, so he was keen to help us out to get it back to this part of the world,” Willson recalls. “The only thing I asked for was for any records or paperwork for the vehicle to be left in the cab. When it was delivered to a friend of mine in Berwick, there were boxes and boxes of documentation from day one, even the original paperwork, and details of every little job that had been done with the MKII.”

At this point, Willson used ‘RWO’ for a few jobs and went to a few rallies, but the cab was in a bad way, not helped by the fact that is was a wooden construction. “We made the decision to get it refurbished, which took about eight years – albeit not full-time because we had a business to run,” says Willson, whose company took on all of the work themselves. “We re-built the doors, the cab frame, all of the aluminium parts. It was a complete re-work of the cab, as well as the ballast body.

“The only thing we didn’t touch – other than a few tweaks – was the engine, which was in pretty good order,” says Willson. “The gearbox wasn’t quite so happy, so we made a few adjustments. The auxiliary gearbox was in a poor way; but the main drive on the back was OK. It had all-new brake chambers and pipes, and all the wheels came off, and the hubs were stripped and re-packed.” Willson says the wheels caused a bit of bother because two of them were badly damaged through a tough working life, but the guys worked around that to get them fixed, and had new centres made.

With about six weeks to go before a show in Abergavenny, the vehicle was still in lots of pieces, but Willson’s wife, who ran the show, said she wanted it there. “This was actually a good thing because it gave us a deadline to work to,” he explains. “Otherwise, it wouldn’t have happened, and we might never have finished the project.” As it was the restoration of the Scammell Contractor MKII was completed in May 2011. What makes it even more special – and valuable – is the fact that it is the only one left in the UK, as far as Willson is aware.

You might think that is the end of the story, but far from it. “The original design engineer – John Fadelle – came to have a look at the finished article with Glynne Rees, the Scammell salesman, in 2013,” says Willson. “Rees knew I had it, and wanted to come and have a closer look. They spent a day here, took lots of photographs, and Fadelle told me that he had never had so many headaches with a vehicle. It was the first time anyone had used the KT Cummins engine in anything in this country, the first time ZF steering and an Allison automatic gearbox had been put in a heavy haulage Scammell.”

Willson says Fadelle told him that the biggest problem he had with the vehicle was the cooling system as Fadelle wanted a higher radiator and huge fan to cool the big engine and the torque converter, but the chief engineer decreed that they could only raise the top of the radiator by seven inches. This, in turn meant that the bonnet and the cab were also raised by the same height, which led to a problem, and the chief engineer told Fadelle to go away and not come back until he’d solved it. “Fortunately Fadelle had a meeting that evening at Airscrew (in Weybridge, Surrey) and came up with an old, but very efficient, cast aluminium fan which moved the amount of air needed,” explains Willson. Airscrew had made wooden propellers for WW2 aircraft so had plenty of experience in this field.

Now into almost permanent retirement, the journey that this MKII has been on cannot be underestimated. Even though he has only had the vehicle for a relatively small amount of its life, Willson knows all about its history. “The trucks chassis got broken in half once – that’s how we knew we’d got the right one!” he explains.

“Wynns had a very well-known welder – Mr Bryn Lavender – whose welding was like handwriting. He told me the story many years ago, where something happened on a weigh bridge and the chassis got broken through, just behind the cab. Lavender was sent to repair it, and had a day to fix it – and he managed it, which was unbelievable. I think a bit of extra work has been done since, but he repaired it in a day. If you look at the wing on one side, it is slightly shorter – the same with the steps going onto the back body. When I made the new wings, I made them the same as before.”

Something to look out for if you see it at The Heavies. Either that, or just marvel at the vehicle itself and the life it has led…

As documented, the fan/radiator were the vehicle’s most critical area

The Scammells driving position and the Spicer 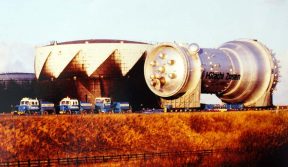 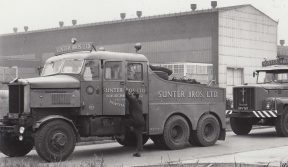 The Sunters name lives long in the heavy haulage world, we chart one of its memorable moves 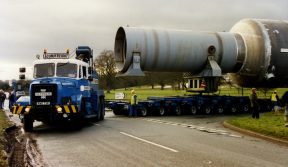 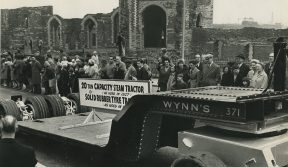 The first in a new series charting the life and times of heavy haulage legends! Part one: John Wynn