FROM A FALTERING START, NOW MORE THAN A DECADE AGO, TELEMATICS SYSTEMS ARE NOW AN ESSENTIAL PART OF ECONOMICAL TRANSPORT OPERATIONS. IAN NORWELL LOOKS AT THE PITFALLS, AND AT WHAT THEY CAN DO FOR FLEET MANAGERS.

IT savvy haulage operators will have got hold of the tail of the telematics snake by now, but they may be paying for more than they want, or need. If you haven’t taken on even a basic telematics system yet, believing it to be useful only to big fleets, you are missing a trick, and you should act sooner rather than later.

At the 2014 IRTE (Institute of Road Transport Engineers) conference, telematics took a prominent position on the agenda. Stuart Nancollis, telematics consultant and proprietor of OCTAVE (oil conservation transport and vehicle efficiency) warned delegates not to get swamped in data, something many have heard before. “It’s a vital business tool and it means that you can remotely monitor and measure what is actually going on within your business, rather than you thinking you know what’s going on,” he commented. Nancollis agrees that being swamped with data is a common issue. “Information is like water. You can never have enough of it, as long as you control the flow and divert it to the areas that need it, can handle it, store it, or use it now or later.”

But the telematics suppliers have partly themselves to blame if hauliers have been frightened off. The telematics story has been one of under, and then over, supply. Before the turn of the century, when early telematics systems came on the scene, your fuel consumption data was simply the readout from the pump in the yard. If you were running a mixed fleet with different drivers using a different truck each day – and many of the biggest supermarket fleets did – tracking down the leaks was nigh on impossible. Today, there is no hiding place for poor driving technique, and the data available will satisfy the most pedantic traffic office.

Entering the market in 2000, Daimler’s FleetBoard was a pioneer, and although it suffered a couple of false starts, it is now among the most competent and informative, with bewildering levels of detail for those seriously hunting down top fuel figures. The hardware is installed in all of the manufacturer’s new trucks, and customers have free use of it for a limited period. If they feel it is helping their business at the end of the free trial, they can pay a monthly fee to keep the data coming; signup levels are high.

SEARCH FOR THE PROVIDER

Apart from how much data you need, and it may be a lot or a little, the most important decision is who will provide it. The truck makers follow one of two paths. Some, such as Volvo, Renault and Mercedes-Benz, have their own home-grown system integrated into the truck’s electronic architecture, and it works well. Volvo’s DynaFleet, Renault’s OptiFleet, and Mercedes’ FleetBoard are among the best and they give a depth of information that would have a data-junkie high as a kite. Other manufacturers have taken on a specialist provider as a partner, which can help with multimarque fleets.

In 2002, when a common fleet management system (FMS) interface was agreed by all major truck makers, the road was cleared for the development of these aftermarket systems. Iveco choose to take a bespoke system from Qualcomm for its ‘blue&me’ fleet package. MAN has had Microlise as its’ nominated supplier since 2006, and DAF signed up with it as well in 2014. If you’re buying a new truck, there will be an attractive deal on the table, but for existing fleet, there’s a lot of retro-fit choice, just keep it simple.

It’s certainly true that early telematics systems tried to do too much. Being swamped with data was an issue for one of the UK’s largest waste management specialists. Rob Stubbs, group fleet director for Veolia Environmental Services, manages a fleet of over 3,500 >18-tonne vehicles, mostly employed on waste collection. Stubbs admits that he could only dream of the kind of fuel returns that regular hauliers attain, but he also knows that the percentage game would work for him too.

With an annual diesel invoice for £60 million, it would take less than a 2% improvement to put a million back on his bottom line. The company’s three-axle rigids with heavy, complex and energy-hungry bodywork and automatic transmissions, toiling away on a merciless stop-start duty cycle, were always going to turn in low fuel figures, but there was still room for improvement.

CMS SupaTrak, vehicle tracking and fleet management specialists, won the business, and Veolia invested more than £1M fitting out the fleet. Drivers daily score cards and a wealth of data from their vehicles poured in, and managers were nearly drowned. “We probably tried to be too clever too soon, and we nearly sank in a data swamp of our own making,” recalls Stubbs. After a full review, the process was boiled down to measure just three driving elements: over revving, idling, and speeding. A daily, weekly and monthly report was then automatically produced, and an easily understandable league table of drivers was generated.

With 3,500 drivers and 168 operating centres, the telematic system’s investment was paid back in the first year of operation. The fuel consumption improvement continues, and is now running at around 7%.

Driver performance is the biggest single element where management information is worth its’ weight in gold. It is well documented that improvements gained on driver training courses are never fully replicated in real life, and that whatever gains are carried through to a driver’s home operating environment, usually deteriorate further with time as old habits come back.

It’s true that basic coaching devices have the advantage of being in-cab all the time, but Scania has gone one better and added a further angle. In addition to the existing SDS (Scania Driver Support) performance evaluation, the Swedish manufacturer introduced an element of personal coaching in 2013. Via the Scania Communicator (already providing data to fleet managers and workshops) a personal coach will be able to remotely access driver performance, and monthly telephone briefings with drivers will be available that can now keep the process alive and on track. Specific areas identified by the SDS can be focused on, and this personal coaching is hoped to have a long-term effect on driving style.

Those personal coaches are now at their desks in Scania’s Milton Keynes HQ, and the company’s fleet management specialist, Darrell Taylor, says that it can work in a number of ways. “Our preference is for our personal coaches to speak directly to individual drivers, but if a customer prefers them to speak to their driver trainers, that also works well.”

For STGO operation, a tailored package will be essential. Your needs are not those of a supermarket fleet engineer. Getting a system set up properly in the first place will steer you away from the vale of tears trodden by Veolia’s first pass at telematics, and they were not alone. Head of fleet management at MAN Truck & Bus UK, David Lester, says that this is where hauliers can come unstuck very early on. “It’s all in the setting-up. The benefits coming back will be commensurate with the time and care put in to get the system right at the outset. It’s that simple,” he says.

The performance of the truck and the driver is at the core of any system, but the top four data streams that fleets are using are driver and vehicle performance, track and trace, cameras and journey management. Among the fastest developing element are cameras. In an increasingly litigious landscape, they are proving to be the best defence in court against malicious claims of bad driving and the like. So much so, that insurance companies are even funding their installation as it saves them money in the long run. When it comes to fuel performance, specialist operations that live with high consumption figures don’t have to tolerate them as part of the job. Whatever the fleet average is, it can be improved and feed the gains straight back to their bottom line.

Never has information on vehicle and driver performance been so easily acquired, nor the data to manage vehicles in the most efficient way. The watchword is tailoring. If a telematics salesman knocks on your door with a standard one-size-fits-all package, it’s unlikely to be right for you. 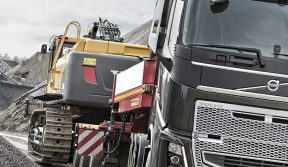 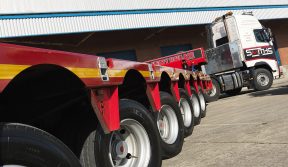 Necessary evil, or worthwhile investment? We examine the new technologies coming to rubber 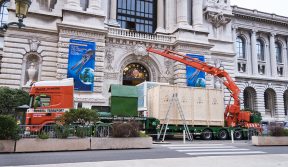 There is more than one way to move a heavy load – efficient, effective techniques highlighted 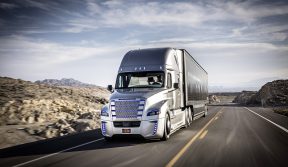 Designed by Germans, built by robots, driven by... computer