I-SHIFT GETS LOW FOR UK

HOT ON THE HEELS OF WINNING TRUCK INNOVATION OF THE YEAR AT THE HEAVIES 2017, FOR ITS I-SHIFT CRAWLER GEAR TRANSMISSION FOR HEAVY HAULAGE APPLICATIONS, VOLVO TRUCKS (GREAT BRITAIN), HAS PUT A FULLY-EQUIPPED FH16/750 8X4 TRACTOR UNIT INTO ITS DEMONSTRATOR FLEET. IT WILL GIVE SPECIALIST HAULIERS THE OPPORTUNITY TO SUBJECT THIS NEW TRANSMISSION TO THE MOST IMPORTANT TEST, REAL WORLD OPERATION. ANDY ADAMS REPORTS.

While Volvo has had a very strong following in UK heavy haulage circles for nearly five decades, it’s recently lost ground to the likes of Mercedes Benz in the higher weight category, because of limitations imposed by the use of the standard I-shift transmission when used in conjunction with the more powerful versions of the well-established 16-litre engine. With just 12 ratios it was difficult to achieve reasonable gradeability and startability at 150 tonnes gross or more, without specifying very low axle ratios. This has a detrimental effect upon fuel consumption when running at lighter weights. Also, continuous low-speed manoeuvring at high weights could cause the standard automatically-controlled single-plate clutch to overheat, which shortened the potential service life considerably.

The new version of the I-shift transmission can be specified with either one or two extra low ratios, which in the case of the overdrive versions used in the heaviest application, means two extra ratios of 17:1 and 32:1 respectively and a reverse ration of 37:1. This dramatically increases both rolling gradeability and the ability to restart at very high weights on steep gradients. Volvo has sufficient confidence in the system to rate it for gross weights as high as 325 tonnes, which is far higher than any other European manufacturer unless some form of fluid coupling is in the transmission.

There are a number of crawler equipped I-shift heavy tractors already in service in the UK and Europe, the early reports are that they are working well and operators are pleased with the performance of the system so far. It now means that hauliers running at very high gross weights on a regular basis are able to specify the most powerful 750bhp/3,550Nm output version of the 16-litre engine range, benefitting from reduced journey times and the ability to handle almost any terrain with relative ease.

Other operators appreciate the potential benefits, but want to try it for themselves before committing to the new transmission. Shortly they will have the opportunity to do just that. HeavyTorque intends to closely monitor the performance of the big orange demonstrator and hopes to go and see it in action soon. If you have a requirement for a heavy haulage tractor and Volvo is on your list, best contact your local Volvo truck dealer. 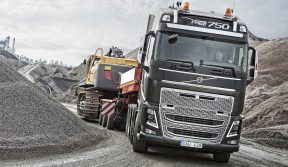 As Volvo UK celebrates half a century in the country, we chart its progress 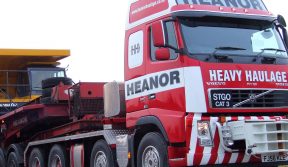 Eighty years of heavy haulage at Heanor Haulage, overseen by the Searson family 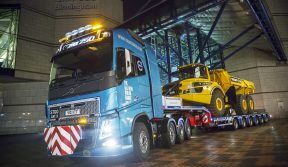 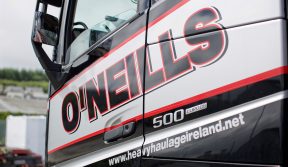