SCOTTISH PHOTOGRAPHY PRODUCTIONS’ ACE, DAVID POLLOCK, ALWAYS TAKES A GOOD PICTURE. WHEN WEST OF SCOTLAND HEAVY HAULAGE MOVED THE LARGEST LOADS EVER THROUGH THE STREETS OF GLASGOW, HE WAS GIVEN A CLOSE-UP. JIMMY CAMPBELL AND HIS TEAM – LEAD DRIVER, TREVOR ‘DIGGER’ WALSH, JAMES MCDADE, EDDIE BRUCE, NEIL BENNETT, BILLY PORRIT AND DAVID MCCONNELL – WELCOMED HIM ON THE RIDE. THEY WERE THE NIGHT CREW. THIS IS PHOTO-JOURNALISM.

West of Scotland HH was tasked by Lodge Cottrell, one of the world’s leading specialists in air pollution control, to transport three massive fabric filter casings (silos) from Westway Industrial Park in Renfrew to Polmadie Recycling Centre in Glasgow. This is an easy twenty-minute journey in normal conditions but, as we have learned over the years, West of Scotland doesn’t do easy, normal or simple. And ‘massive’ barely describes the silos’ dimensions – 21m long by 6.1m wide and 5.8m deep. Indeed, this move was one of the most technical and stressful yet rewarding – and, at first-hand, eye-opening.

Viridor and Glasgow City Council have begun construction work on the new Glasgow Recycling and Renewable Energy Centre (GRREC). The facility is being built at the Council’s long-established waste treatment plant at Polmadie, on Glasgow’s south side. The state-of-the-art £154m centre will process around 200,000 tonnes of council ‘green bin’ household refuse each year. In combination with city-wide recycling collections (from separate blue, brown and purple bins), the plant will help divert 90% of this green bin waste away from landfill. That will save millions of pounds and – by recycling resources from household waste – produce valuable heat and power. It will be one of the most advanced waste management facilities in Europe.

Glasgow City Council collects and processes on average 350,000 tonnes of waste every year. Figures released in 2010/11 show the majority (74%) was sent to landfill. Annual hikes in landfill-tax, coupled with ambitious Scottish Government zero-waste targets, means Glasgow City Council had to plan for change. Their focus is on waste reduction and re-use: enhanced recycling and recovering renewable energy from what remains. This entails a radical overhaul in the way the city manages household waste over the next 25 years. When operational in 2017, the facility will produce enough energy to power the equivalent of 22,000 households and heat the equivalent of some 8,000 homes – a monumental reduction to Glasgow of 90,000 tonnes of CO² every year. At the same time, it will deliver a payback saving to the city of circa £254 million during the 25-year contract, as well as creating 250 new jobs, including 25 apprenticeships. The new facility will also support local social enterprises, as well as small and medium-sized businesses, during the building programme and throughout the 25-year projected lifespan.

THE NIGHT OF THE JOB

Days, weeks, months of planning… meetings, test runs, paperwork… all finally come down to this day, this hour, this moment. The first step: ensure anything that might get in the way is removed, so passage, en route, is as smooth and trouble-free as possible.

Because of the loads’ dimensions, West of Scotland was forced to use Glasgow’s ‘A’ road system. Some of these are barely large enough for a bus. It was a challenge only the best in the industry would accept. Staggered over three alternate July nights, beginning Sunday 12th and finishing in the early hours of Friday 17th, the team had only a four-hour window to deliver the mammoth steel hulks from one side of the city to the other.

Team Briefing was 23:00 sharp. Then the convoy – two Police vehicles, two WoS Escort vehicles, and a tow-truck (from M8 Recovery for the TTRO order) – rolls out onto Porterfield Road, dead on midnight. Trying not to wake the quiet sleepy town of Renfrew, less than 500 yards out of the gate the team are immediately up against it. First challenge: a tight left-turn onto Paisley Road. Hampered by parked cars, they skilfully thread the load through with only inches to spare. Trevor ‘Digger’ Walsh and the team quickly get back up to speed, weaving the load carefully down Paisley Road. Then the convoy had to use the abnormal load route diversion, hanging right onto Glebe Street – a busy street, on a normal day full of centre islands and street furniture. Precise planning by West of Scotland HH had given Renfrewshire Council time to remove the centre-island signage: this gave the team a bit more precious road, away from residents’ parked vehicles. Approaching the first road-island one sees the manpower West of Scotland has committed to the project. Working fast, the team soon has wooden ramps leading up the kerbs winding along Glebe Street.

Then the convoy approaches an iconic roundabout (Dean Park): there is a road through the middle, a relic from Renfrew’s long-gone industrial days when Pickford’s were a regular sight. The police go on ahead to close the road two junctions up, allowing the load onto the wrong side of Glasgow Road, a full 1000 yards before slipping back onto the correct side of the dual-carriageway. Now the convoy approaches one of the busiest junctions, just outside Breahead.

At the roundabout the sheer scale of the load becomes apparent, with ‘Digger’ having to rely on steersman, James McDade, to ensure the rear of the trailer gets round. A short run along Renfrew Road brings us to the back end of Breahead, and another tight, sharply-cambered roundabout. Again, the West of Scotland team combine to ensure safe and clean passage. Running along Sheildhall Road, new roadworks’ signage has been put up – hours after the team had checked the route! Too big to turn, there is no going back.

The convoy pushes on towards Helen Street. Here, Scottish Gas has decided to dot numerous holes along lane 1 of the two-lane carriageway. They’ve also erected Heras fencing along the demarcation line, then round and onto an already mega-tight roundabout. Now the roadway is too narrow for the 6.1-metre wide silo. The six-strong team moves the fencing into lane 1, which soon allows us to clear the carriageway. As we wind towards Glasgow’s landmark Ibrox Stadium, another tight hilly section on the route halts the convoy while the trailer is lifted to clear the road surface – a further demonstration of the versatile and adaptable Scheuerle trailer.

With 01:00am fast closing in, the team are keen to keep rolling. Easing down off the humpback onto yet another sharp roundabout, taking it in their stride, the team use the rear-steering axles, sweeping round like clockwork, arriving outside the aforementioned home of Glasgow Rangers. Traffic Control shoots off ahead to block Paisley Road West. Now ‘Digger’ can use both sides of the road to make the right turn (Paisley Road): it’s tight indeed, very tight, but round with no real challenges, all straight again. Billy and James jump into the vans, ‘Digger’ pulls away from the junction; West Street, Clyde Place fly by; nothing to cause any issues.

At 01:30am the convoy rumbles into Glasgow city centre, via Oswald Street. Here the team meets up with staff from Siemens Traffic Control. For extra room through these sections of the route, the traffic-lights have been isolated and taken down. Slowly swing the load round the tricky right turn, then a stop: to adjust the trailer height – ensuring clearance of the steep arch of the 1928, Cat-B-listed bridge. Now the load takes an immediate left under the iconic Central Station Bridges. For our rear swing-round, Siemens had helpfully laid the traffic-signals flat; still keeping the trailers running height as low as possible, we pass neatly under the bridge. Nice and easy, the team breezing the overhead challenges.

Travelling along Clyde Street, the site of the tragic helicopter crash is off to our right. Idling quietly, respectfully, by The Clutha Bar, now it’s ‘shunt the trailer’ – Glasgow City Council have somehow permitted scaffolding on the corner, making it way too tight to take the left turn in one cut. ‘Digger’ noses the DAF into Steel Street, reversing back onto Saltmarket, while James steers the trailer from the rear.

02:00am, shunt over, steering straight – and off again, moving onto the final section of the route: nice quiet streets, the run almost peaceful. Crown Street, Laurieston Road pass by, uneventfully. Then, suddenly splitting from the convoy, blue lights whipping away the darkness, the police go ahead to block the approaching junctions. Approaching Caledonia Road… tight left, wrong-siding the carriageway for 2-300 yards, then cutting up through The Boulevard. Another roundabout. Another challenge. Same story as before, but the tightness forces the team to shunt and crab the trailer back and forth, to get clearance and the load round and clear.

Next up: New Rutherglen Road, and a previous West of Scotland project – the Bridge sections for the M74. On approach to the sharp, tight, narrow, right-turn onto Polmadie Road, just before 02:30am: pause: then the team begin negotiating the messy, street-furniture-cluttered junction. James again steers the rear; Billy is up at the neck, monitoring heights and pressures. Now the extra eyes of Neil, Eddie and Jimmy assist: slowly, carefully, easing the behemoth between indifferent traffic signals. The load makes it through with – again – only inches to spare.

Now the end is in sight, but the challenges keep coming. Another steep humpback bridge – over the West Coast Mainline – means the trailer needs lifting to its maximum. Now it’s everything truck and trailer can give height-wise; and the load just manages to creep over the crest with enough clearance to allow a speck of light to be seen under the trailer.

02:45am: the convoy is just outside the site, yet the TTRO order has been ignored. Sean Corcoran and Steven Hudson from M8 Recovery get the call to lift a Vauxhall out the way – more room, more space…Maximum swing. Once again, James is called into action. Guiding and steering ‘Digger’ in from the rear, arcing past the garage-block outside the site. Now the minutes and numbers are up. High-latitude dawn is in the sky. And, once again, West of Scotland HH has lived up to their name: precision, skill, agility and the ability to overcome.

This is one job which will remain in the history books for years. 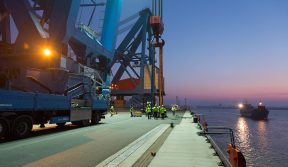 Felbermayr’s efforts to help put the power into Poland 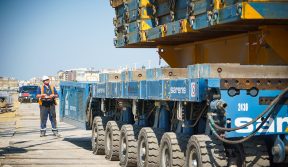 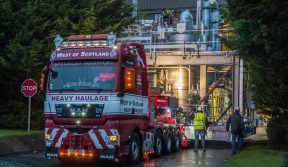 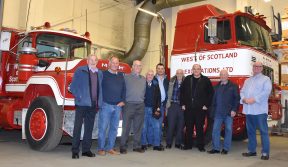