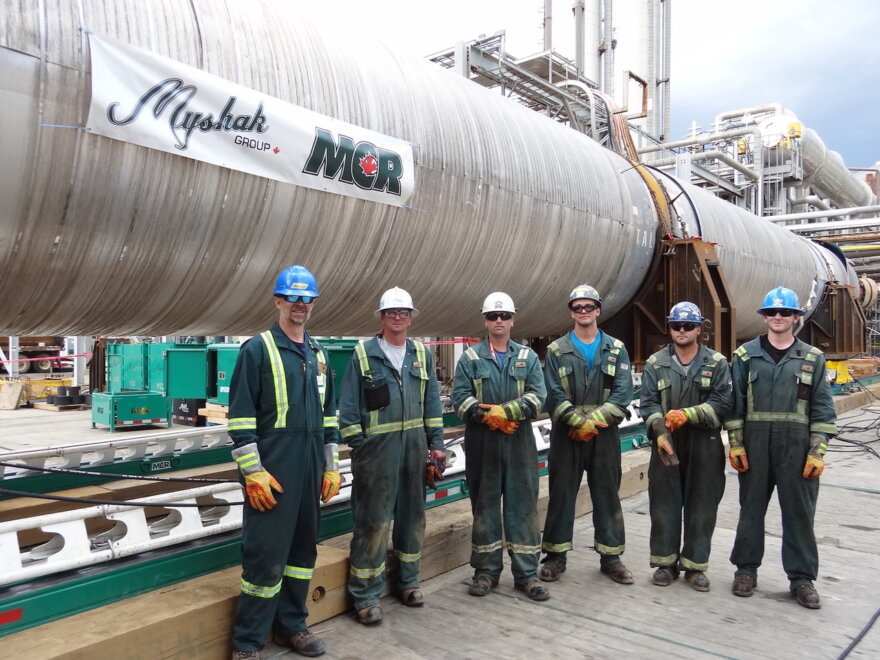 The facility produces and distributes over 26 million tonnes of potash, nitrogen, and phosphate products for agricultural, industrial, and feed customers worldwide.

Myshak Crane & Rigging (MCR), a Canada-based specialized rigging company, was originally engaged in the project as a consultant, as the client considered its options at a confined site where congestion and ground pressure limitations were the main challenges. Troy Burton, specialized rigging field manager at Myshak, explained: “Our group is what we consider a specialized rigging group that doesn’t focus on only large complex projects but the small ones also. We try to excel in coming up with the best way to achieve our customers’ goals in the most economical and safe way. We shine when a client allows us to think way outside the box to design and engineer to the needs of the project. In this case, the client wanted to replace the converter as efficiently as possible with minimal disturbance to the surrounding piping and other equipment. We discussed a number of options, including changing it out with a replica or increasing the size [of the converter].” 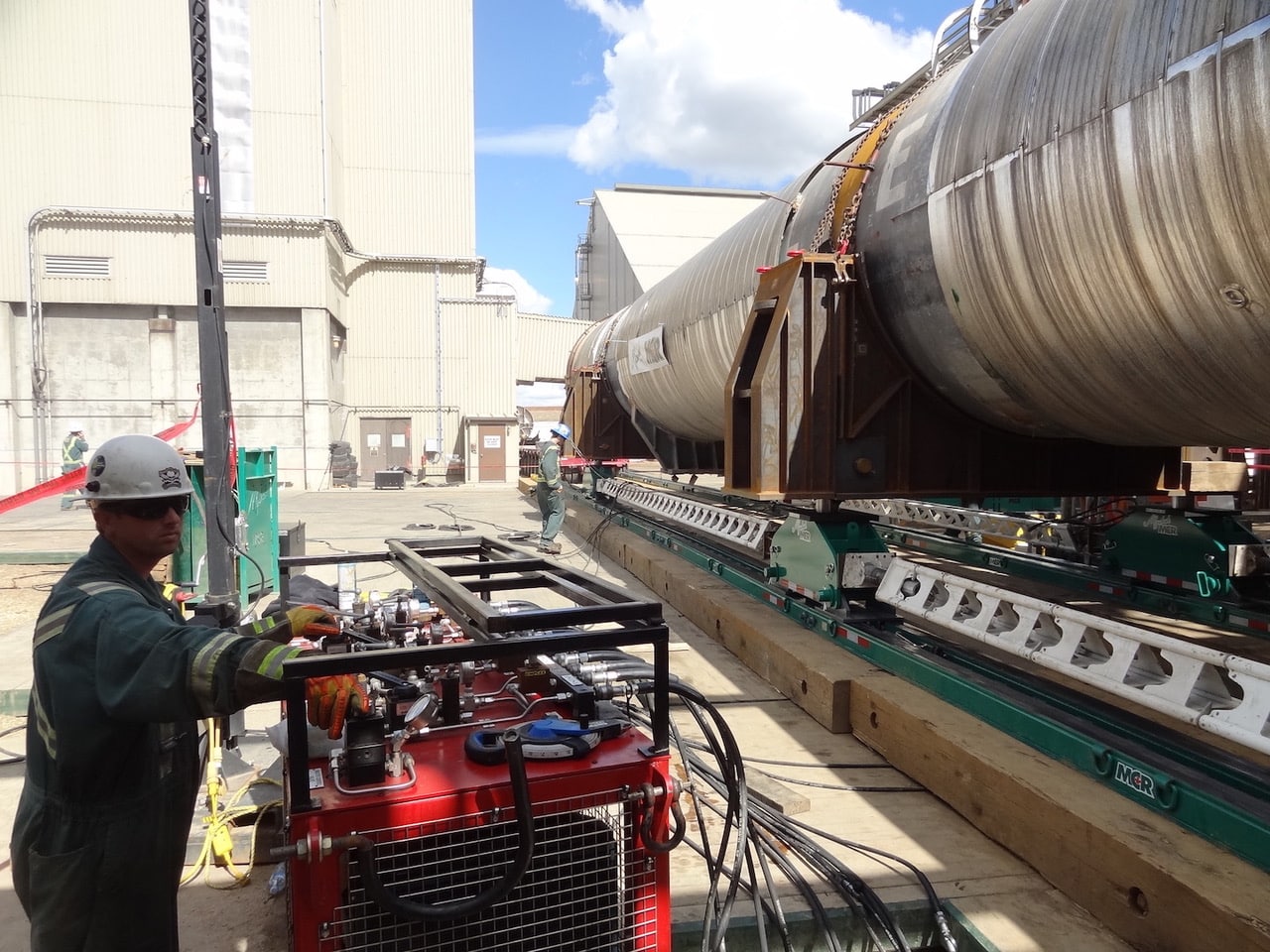 Eventually, it was decided to replace it with a bigger unit, which would require Myshak to explore the breadth of its rigging equipment fleet that includes a 300-ton capacity heavy track HT300 and 350-ton capacity low profile LP350 hydraulic skidding systems, complete with over 60m of combined track. Hydra-Slide JLS250 jacking load shoes and a Hydra-Pac synchronous 10,000-psi hydraulic unit to power six double-acting hydraulic cylinders were also required.

Burton explained that Myshak first received the new converter and accompanying basket from rail and offloaded them using the HT300 skid system for storage until the shutdown was underway. It was then required to load out and transport an old, spare basket from site to make room for the installation of the new, larger one. Then Myshak loaded and transported the new converter basket from storage to the plant to be filled with catalyst prior to installation once the shells were switched out. The old converter shell complete with basket and catalyst weighed 514,500kg and was 2.7m in diameter and 32m long. It was jacked up and skidded horizontally in one piece more than 50m to a more open area using the JLS250 skid shoes and HT300 skid track where it was then loaded onto a self-propelled modular transporter (SPMT).

The new converter shell weighed 377,000kg without the basket and 520,200kg with it, and measured 3.0m in diameter and 35m in length. It was then skidded the same distance into position over the foundations and lowered onto the anchor bolts. 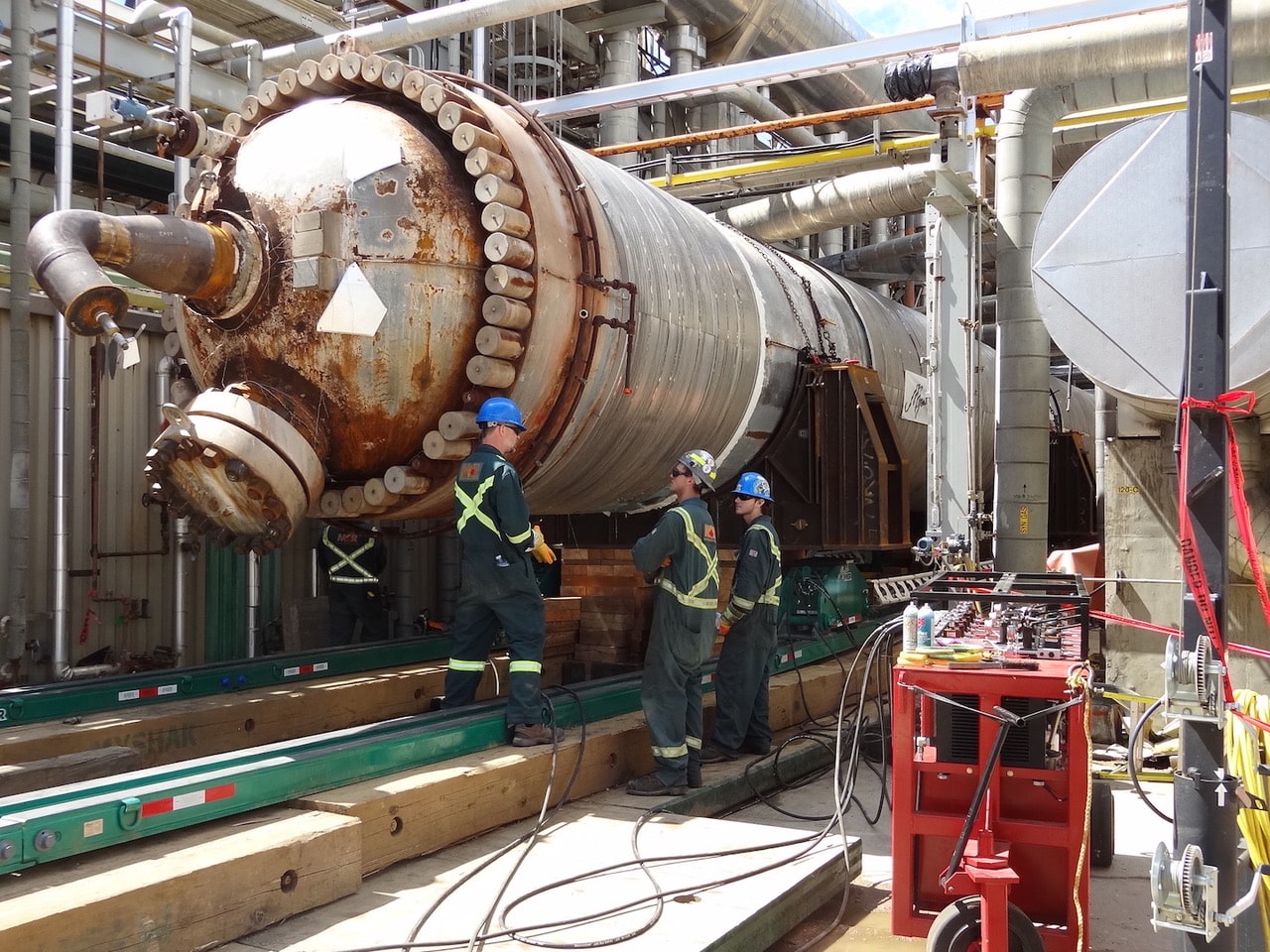 The six JLS250 jacking load shoes were hydraulically connected in a three-point suspension to lift and slide the converters on the HT300 track. The shoes are a universal design that work with both Hydra-Slide’s heavy track HT300 or HT500 skidding systems. They can be connected hydraulically with any number of other shoes increasing the total system capacity while maintaining equal load support and weight distribution.

Burton explained why they were key to success at on site: “Due to the very tight confines we had only 5cm of clearance in some areas and when you add in that the ground conditions were soft, the load could even ‘tighten up’ some of those clearances. We had to lean [the converter] at one point to give us clearance down the side, then we got close on the top so we had to lower it as we went out.”

Throughout the project Hydra-Slide’s Don Mahnke, president, and Robert Young, director of operations, provided support to Burton and Brad Hillgardner, engineering and contracts at Myshak. Young said: “We were happy to be part of the Myshak team and help them feel more confident in using this new equipment.”

Burton added: “The equipment performed perfectly and made us look impeccable to our client. Don and Robert even came to the jobsite for the move to help ease our client’s concerns with this critical move.” 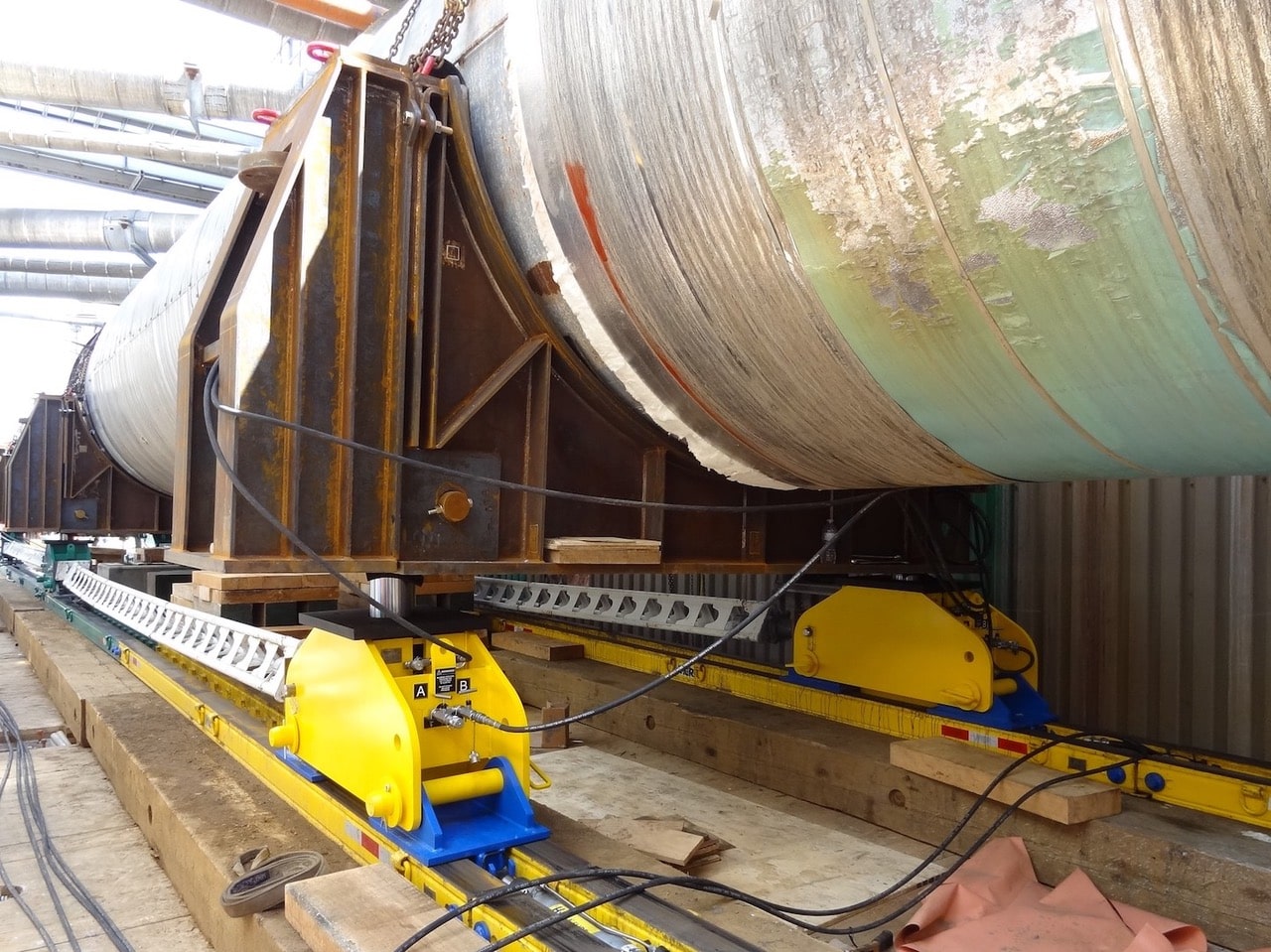 The JLS250s and HT300 did the bulk of the work but the low profile LP350 system was used to remove the head on the converter due to clearance issues. At the end of September, Myshak will use the JLS250 shoes and HT300 to pull and remove the basket from the old shell for disposal.

Hydra-Slide recently redesigned the HT300 shoes and cylinders to be capable of either pushing or pulling the load to further increase their capabilities. In conclusion, Burton called Hydra-Slide equipment “the Cadillac of systems”. He added: “The ease of use and assembly is by far the best and most user friendly I have experienced. The add-ons that we have as in the new push-pull design and the jacking load shoes are just incredible and equally user friendly.”

Both Hydra-Slide and Myshak agreed that the project was a prime example of a rigging crew and all parties involved working together to pull in the same direction. Teamwork and collaboration on this high profile project made a successful outcome possible.