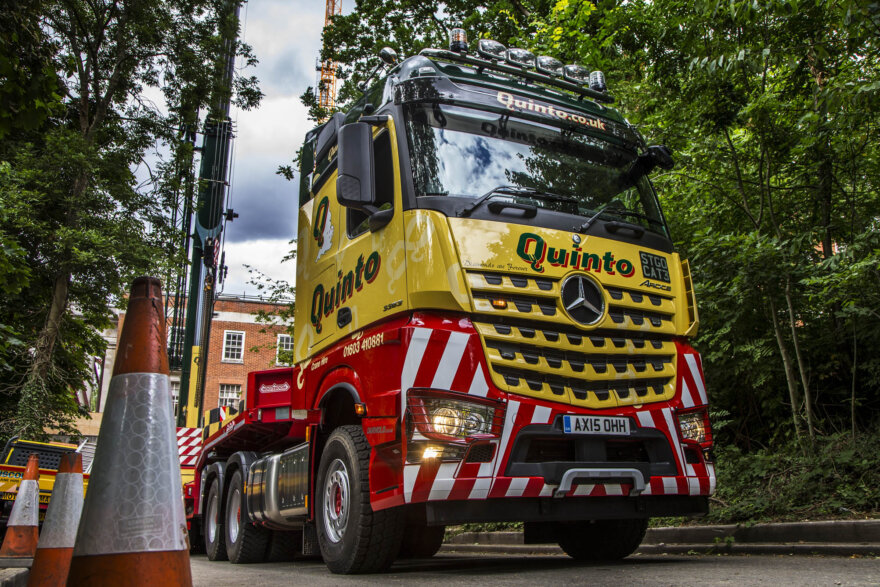 The new owners of Norfolk-based Quinto Crane & Plant have underlined their determination to go for growth by investing in a new Mercedes-Benz heavy haulage tractor and trailer.

However, the combined cost of the 155-tonne Arocs 3363 S and its six-axled Nooteboom low-loader pales alongside the £1.1 million that Quinto has also just spent on its new, Grove mobile telescopic crane.

Supplied by Norwich Dealer Orwell Truck & Van, the Arocs will spend most of its time transporting the 10-tonne slabs of steel that serve as ballast to secure the 300-tonne mobile crane during operations. It will also be used to carry demolition equipment, and undertake other heavy-duty tasks.

Quinto Crane & Plant was founded in 1977 and serves regional and national hire customers from its headquarters in Norwich, and a network of six branches across East Anglia and the East Midlands.

The company was acquired in a multi-million pound buyout last year by husband-and-wife team Oliver and Hannah Arnold. They have already injected a total of £2.5 million into the fleet, with further investment planned, as well as launching a Demolition & Dismantling division.

Oliver Arnold explained: “There is a construction-related synergy between our established lifting and machinery moving services, and the new demolition and dismantling operation, which will benefit our clients.”

It is, however, cranes that Quinto will continue to be best-known for, and the company offers a comprehensive range of lifting solutions, as well as training courses which are fully accredited as meeting recognised national standards.

The muscular Mercedes-Benz Arocs range is purpose-designed for construction-related operations. Quinto Crane & Plant’s 460 kW (625 hp) example made its debut on the Orwell Truck & Van stand at the 2015 Norfolk Show and has been quick to impress, thanks to its ground-breaking Turbo Retarder Clutch. This works in conjunction with the 16-speed Mercedes PowerShift 3 automated transmission and can handle some 3,000 Nm of torque, significantly more than a traditional torque converter.

Wear-free and fuel-efficient, it also offers fine control characteristics and has its own, powerful integrated primary retarder, meaning the separate retarder that would otherwise be required to assist the high performance engine brake in bringing a fully loaded rig of up to 250 tonnes gcw safely to a halt is not needed.

“We have to get into some tight and awkward places and after driving one of our previous ballast lorries I realised that for low speed shunting its traditional dry clutch just wasn’t up to the job,” said Oliver Arnold.

“So we did our homework, read up on the revolutionary new Turbo Retarder Clutch which Mercedes-Benz has developed with Voith, and concluded that it was exactly what we needed.

“The new truck is now up and running and the system is proving every bit as flexible and cost-effective as we’d hoped – it’s given us a capability that we were seriously lacking previously.”

The Arocs is the subject of a Mercedes-Benz Repair and Maintenance Contract and will be inspected and serviced by the workshop team at Orwell Truck & Van’s Norwich branch. As part of the deal, Orwell took back an Actros MegaSpace tractor unit with tag axle, which had been working on the Arnolds’ farm contracting business for the last three years.

“We’ve dealt with the representatives of various different truck manufacturers and I would have no hesitation in saying that Orwell Truck & Van is the best in the county by a mile,” continued Mr Arnold. “They know what they’re talking about and they do what they say they’re going to do, while if we ever have a problem we know we can rely on them to sort it quickly.”

He added: “My wife and I have already invested a lot of time as well as money in Quinto Cranes, which is a family business that we hope to pass on to our two children, Kate and Jack. It’s been challenging at times but also hugely interesting and I’ll happily admit that I love it. As for our new Mercedes-Benz Arocs, we’re very proud to be the owners of such a beautiful bit of kit.”