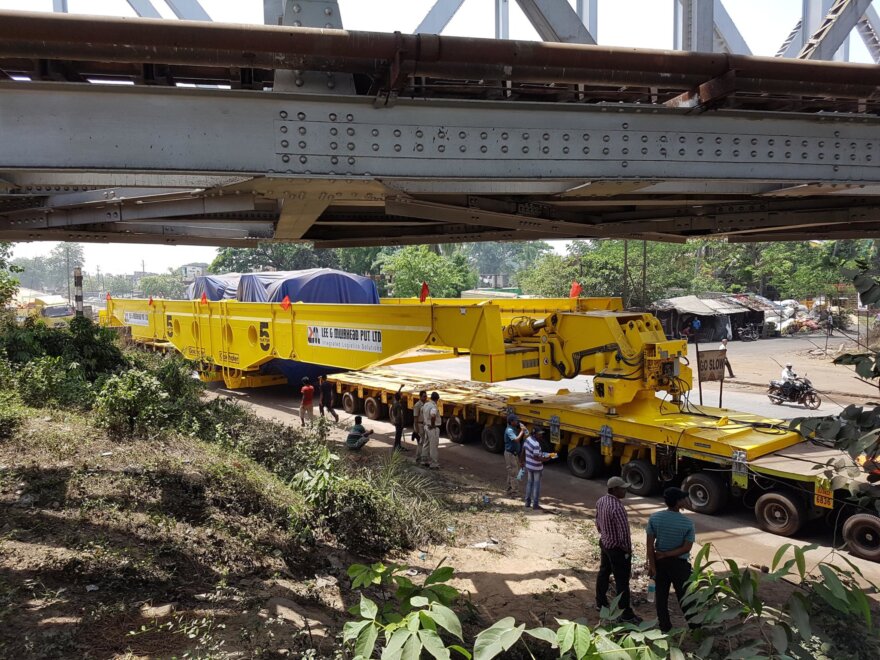 The heavy-haulage specialist Lee & Muirhead Pvt Ltd. used Goldhofer’s multifunctional “lightweight big boy” – it is designed to handle a wide range of oversized cargos with a deadweight of just 100 tons – to transport a 405 ton power plant generator stator over a distance of 500 kilometers. The complete rig, comprising a 2×18-axle THP/SL combination plus the »Faktor 5« bridge with an overall weight of 752 tons, took three months to complete the journey.

It was not an easy journey: The restrictions on heavy haulage operations on the Indian subcontinent are legion, and the road network – although one of the biggest in the world with a total length of 3.3 million kilometers – is only 50 percent hard surface, and long-distance multi-lane roads are few. For transporting cargos weighing hundreds of tons, like stators, generators, transformers, turbines and cable drums, those are not exactly ideal conditions.

With this situation in mind, the specialists at Lee & Muirhead decided to call Goldhofer’s »Faktor 5« high girder bridge Hanuman after the Indian monkey deity, who is revered for his enormous strength, which according to legend enabled him to carry a mountain from the Himalayas. “With our heavy haulage operations, we sometimes have to move mountains, too,” says Pankaj Gadhia, CEO at Lee & Muirhead, “which is why Hanuman is the perfect name for our »Faktor 5«”.

And it was truly heavy work that the Goldhofer high girder bridge had to perform, with more than 150 multi-span long bridges and numerous other obstacles to be negotiated on the 500 kilometer long route. It even included a 15 kilometer stretch that had so many tight bends as to be impassable with the »Faktor 5« rig, so that the 405-ton stator had to be moved onto an 18-axle split combination (1+1/2) and the »Faktor 5« completely dismantled.

Having passed through this narrow stretch of road, the bridge was reassembled and the convoy was able to continue its journey as planned. “Thanks to the support we received from the Goldhofer team, we were able to handle such obstacles without any major problems,” says Head – Project & Transportation Ruchit Saraf, who was responsible for the operation with Hanuman.

Another time, the »Faktor 5« had to skirt round a toll plaza. As the terrain was completely unsuitable for a heavy haulage convoy of this size, some ground first had to be filled in on the steep terrain. In addition, a bypass had to be constructed in order to be able to drive over the 25 centimeter high curbstones. On other sections of the route, the gradients were so steep that a third tractor was needed in addition to the standard push-pull configuration.

A particular challenge for the convoy was passing under several Railway & Road Under Pass. On one occasion, the »Faktor 5« had to be completely lowered to pass under a railway bridge. That left a clearance of just four centimeters, but only as long as there was no train on the bridge at the time as that would have caused deflection in the deck of the bridge and damage to the stator.

For the decision-makers at Lee & Muirhead, a company that was founded in 1945 and is now one of India’s leading haulage operations, Hanuman’s first journey proved one thing very clearly: The investment is paying off. “Thanks to our »Faktor 5« we are now in a position to handle such big heavy haulage jobs with outstanding efficiency,” says CEO Pankaj Gadhia.

And that is important, as the construction of new power plants is central to the country’s modernization program, with more than thirty major powergen projects scheduled for the next few years – all involving stators, generators or transformers weighing between 350 and 450 tons. Pankaj Gadhia is correspondingly optimistic about the future: “For such operations, we now have the perfect equipment: a »Faktor 5« high girder bridge from Goldhofer.”

With combination of detailed planning, close co-ordination with all statutory and non-statutory authorities, the commitment with “Can do it” of Lee & Muirhead team helped in achieving the milestone by delivering the Generator Stator safely at Project site on 20th June 2017, two days prior to the scheduled date as per Engineering Schedule and final entry in the TG building on 29th June 2017 safely.