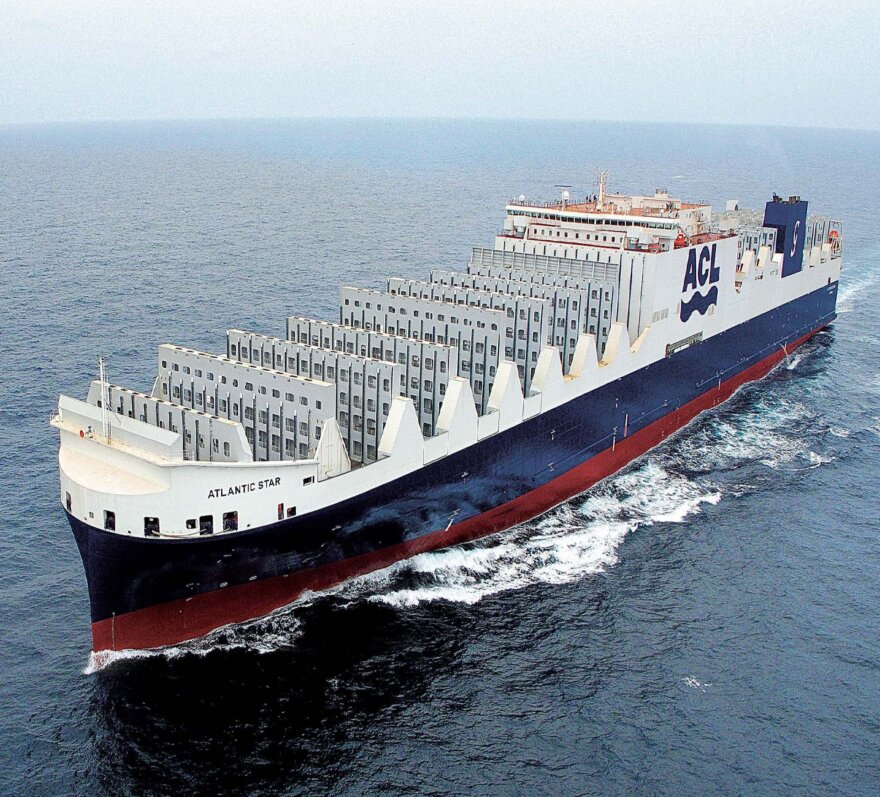 ACL is proud to announce that it officially took delivery this week of the ATLANTIC STAR, the first of five new vessels in the G4 fleet. ACL ATLANTIC STAR will sail from China on Saturday and will join the Company’s transatlantic service in December. She will be christened in Liverpool. The remaining four G4 vessels will be delivered during the first half of 2016.

The ATLANTIC STAR is a first of its kind vessel and the largest RORO/Containership (CONRO) ever built. It incorporates an innovative design that increases capacity without significantly changing the dimensions of the vessel. The G4s are bigger, greener and more efficient than their predecessors. The container capacity is more than doubled at 3800 TEUs, plus 28,900 square meters of RORO space and a car capacity of 1300+ vehicles. The RORO ramps are wider and shallower and the RORO decks are higher (up to 7.4 meters) with fewer columns, enabling much easier loading and discharge of oversized cargo. Emissions per TEU are reduced by 65%. The fleet continues to employ cell‐guides on deck, a feature that will allow ACL to extend its enviable record: ACL ships have never lost a container over the side during the last 30 years.

The ATLANTIC STAR will be registered in the United Kingdom. The first Atlantic Star, one of ACL’s G1 vessels, also flew the British flag. ACL’s current schedule and port rotation will be maintained until all five G4 vessels are in service. During the second quarter of 2016 ACL will announce its new G4 schedule.

The ATLANTIC STAR and its sister G4 vessels will dramatically improve ACL’s competitiveness on the North Atlantic. The G4’s demonstrate to our customers that our parent company, the Grimaldi Group, continues to invest for the long term in ACL’s future. ACL has been successful during its 48 year history by doing things differently than all of its competitors. We employ unique ships, go to unique ports and carry cargo that others cannot carry. The new G4 fleet will enhance our cargo carrying capabilities, and combined with Grimaldi’s ever‐expanding service network; they will enable ACL to provide even more services as a high quality container and RORO operator for years to come.