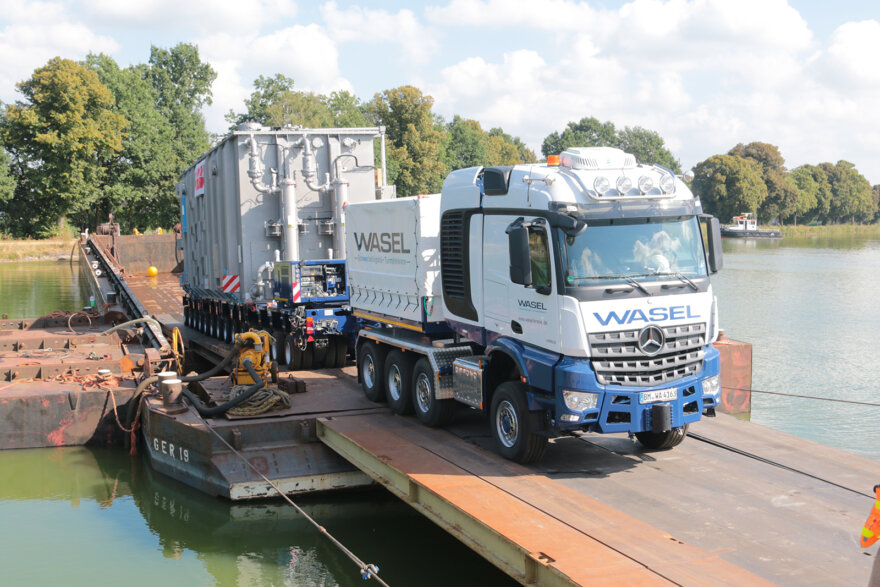 To transport a 4.8m wide and 4.5m high transformer weighing 290t from Bad Honnef to Ibbenbüren, the heavy haulage specialists at the company sent the latest addition to their fleet, a 4-axle THP/ADD aka ADDRIVE, on its maiden journey.

The ADDRIVE is a heavy duty module that combines the benefits of a towed module with those of a self propelled modular transporter in terms of tractive force, speed, flexibility and economics. Goldhofer’s ADDRIVE is designed as a heavy duty module with switchable drive, i.e. with disconnection of the drive unit when maximum speed is reached and continued travel as a normal heavy duty module. The disconnect separates the motor from the wheel and so prevents the drive from overheating. To handle gradients, the ADDRIVE is simply activated again to obtain full tractive power from the system. That avoids the need for an additional towing tractor or pusher.

The first challenge on the journey was driving onto the pontoon from the ramp in Bad Honnef, where the 14-axle heavy-duty module with the 290 ton transformer had to handle a combination of a bend and steep slope. The pontoon then carried its cargo on the Rhine and the Mittellandkanal as far as Recke for the roll-off. Because of the length of the pontoon, it had to dock at an angle to the quay, but that had no influence on unloading. With the help of a towing tractor, the huge load was moved step by step off the pontoon, with the boat’s crew continually adjusting the ballast.

After a good four hours of painstaking work, unloading was complete and the colossus was again on dry land. As the next step, the Wasel team added a further four axles to create an 18-axle heavy-duty combination to take account of the maximum permissible axle loads on the route ahead. Before the journey proper could begin, however, the ADDRIVE had to put in a solo performance to handle the first bend as there was too little space to hitch the heavy-duty module to the towing tractor.

With its 280 hp, the ADDRIVE mastered the situation with ease and maneuvered the module into position for the next leg of the journey. In the meantime a support crew was already at work laying out steel plates to ensure adequate load bearing at critical points like roundabouts and roadworks. The rig, with just one towing tractor, set off punctually at 10 p.m. The gradient on the exit onto the main road was handled with the help of the ADDRIVE and the convoy set off at about 25 kilometers per hour. At that speed the ADDRIVE disconnects automatically from the drive unit and switches to the unpowered mode. The system was also used for auxiliary steering and axle leveling, and the drive was activated for difficult passages requiring greater tractive power. Only for the steepest section, with a gradient of 8.5% over a distance of 800m, was it necessary to add a second towing tractor.

David Wandel – head of transport operations at Wasel – was clearly pleased to see the sovereign performance put in by the ADDRIVE as the 400 t colossus took the 800m long slope. After that, there were a few bends and the confined space of some roadworks to negotiate, and then the convoy picked up speed again and reached its destination, a coal-fired power station in Ibbenbüren, right on time after covering a distance of 17 km by road. Ultimately, the smooth running of the operation was due to Wasel’s precision planning and their crew’s expertise and the use of an intelligent modular combination including a Goldhofer ADDRIVE.