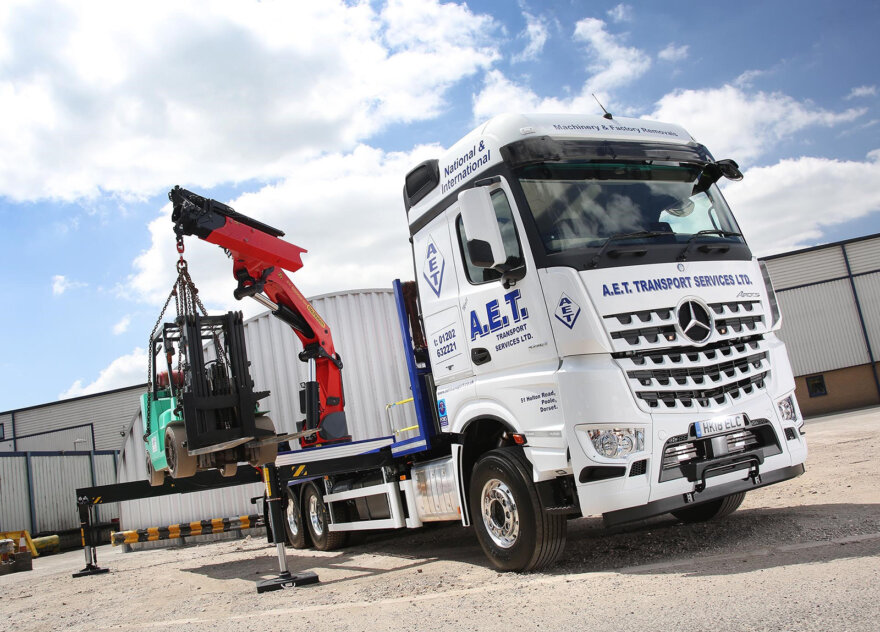 AET Transport Services’ new Mercedes-Benz eight-wheeler has a rear-mounted, 65 tonne-metre crane, one of the biggest to be fitted at the back end of a UK-registered 32-tonne chassis.

The Arocs 3248LK ENA has been assigned to the Poole-based company’s factory relocations team, who move machinery, plant and other large consignments throughout the UK and Europe for the likes of Airbus, Britax, Rolls-Royce and Sunseeker.

Supplied by south coast Dealer Marshall Truck & Van, the Arocs has a flat-floored BigSpace cab and an advanced, 12.8-litre straight-six engine, which transmits its 350 kW (476 hp) output via a smooth Mercedes PowerShift 3 automated transmission. The truck is additionally equipped to pull a drawbar trailer at a gross train weight of 44 tonnes

The AET Group, which also comprises AET Andover, Curvin Transport, Dorset Crane Hire, and Eaton Transport divisions, runs a combined fleet of 66 vehicles – 16 are by
Mercedes-Benz, all of them Actros tractor units with the sole exception of a 15-tonne Atego.

The line-up also includes three 32-tonne 8×2 trucks with cranes conventionally positioned immediately behind their cabs. A replacement for AET Transport Services’ previous eight-wheeler with rear-mounted crane, the Arocs is the Group’s first eight-wheeler to wear a three-pointed star, and was acquired with competitive funding support from Mercedes-Benz Financial Services.

Its chassis configuration is also a ‘first’ for AET – Mercedes-Benz ENA models feature a single, front-steer axle, double-drive bogie and, crucially, a rear-steer axle, which gives them significantly enhanced manoeuvrability compared to a standard 8×4 vehicle.

AET Group Managing Director Andrew Trotter explained: “A rear-mounted crane will always be more appropriate for some jobs, as it allows us to back into the premises and reach further.

“The truck’s rear-steer axle also gives us an excellent turning circle, which is a major advantage on some, difficult to access sites. We talked to another manufacturer which offers a chassis in the same configuration, but came down in favour of the Mercedes-Benz, not least because its axle loadings were better suited to the crane.”

Their aim was to shed as much weight as possible, without compromising stability and rigidity. So, for example, the low-height sub-frame was fabricated from a special, high-grade folded steel plate, which is stronger yet lighter than a standard, ‘off-the-shelf’ boxed material.

Having committed to build a platform body and crane installation which offered a maximum payload of as close as possible to the 9.5 tonnes achieved by its predecessor – albeit with a smaller crane – they have now delivered a truck capable of carrying 10 tonnes.

“I’m very pleased with that figure, as the extra half-tonne gives us a lot more flexibility,” confirmed Andrew Trotter. “An eight-wheeler which can lift 10 tonnes from the back end and then carry all of that weight is going to be a very productive addition to the fleet.”

He continued: “I felt all along that the Mercedes-Benz was the right machine for the job and so it’s proved. Our first Arocs is a beautiful truck; we couldn’t be happier with it.”

Founded by Mr Trotter’s father, also Andrew, in 1977, the AET Group acquired its first Mercedes-Benz trucks in 2014. The company relies on Marshall Truck & Van to inspect and maintain its Actros, Atego and new Arocs under Service Contract Completes.

Mr Trotter added: “Steve Trevett provided first-class sales support on the latest eight-wheeler, while his colleagues at the Dealer’s workshop in Poole make life easy for us by collecting and returning our vehicles. We’ve had very few problems with our Mercedes-Benz Actros, and when the odd issue has cropped up they’ve demonstrated the flexibility we need to keep us running.”