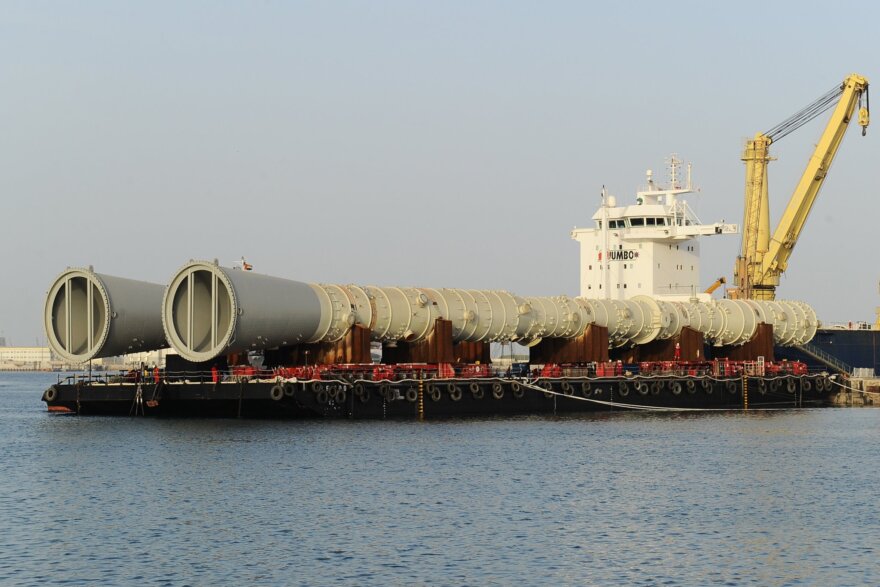 ALE has transported the clients’ heaviest Out of Gauge (OOG) units through Atyrau, Kazakhstan’s oil capital. ALE was awarded the turnkey scope of delivering three spent catalyst hoppers from the fabrication yard to Atyrau Refinery in Atyrau. The hoppers comprised of five parts weighing 814t in total.

ALE provided the full engineering scope, including the stability checks, lashing and jacking calculations, saddles proposals, transport arrangements and all civil infrastructure works. ALE jacked-up the cargo using four hydraulic 130t jacks and six man lifts from the ground to the suitable height for the 24 axle lines of SPMTs to drive underneath the saddles of the cargo.

The heavy pieces were transported in convoy through the city centre of Atyrau on conventional trailers and SPMTs under police escort. In order to minimise disruption to the citizens, transportation was conducted only on Sundays and outside of peak hours.

During the convoy, ALE utilised 44 axle lines of conventional trailers in a 4 file 22 configuration. This was the biggest trailer configuration ever used inside the city of Atyrau. The trailers were precisely manoeuvred through the city’s narrow streets. On several turns, the trailer’s axles were lifted to enable fly-over curbs with no damage to equipment or infrastructure.

Marek Lysko, ALE’s Operations Manager, said: “This project was extremely significant for the region. This is the first time for the client that OOG units with such dimensions have been transported through the streets of Atyrau. This also required the biggest trailer configuration with the utilisation of almost 70 axle lines of various trailers and transport configurations.”

Ali Yoldashov, General Manager for ALE’s Kazakhstan branch, said: “By offering the full turnkey solution with the most suitable equipment and engineering designs to negotiate the city’s narrow streets, we could successfully complete the scope whilst minimising disruption to businesses and members of the public. The award and successful completion of the contract reinforces our growing reputation as a trusted heavy transport and engineering partner in the region.”