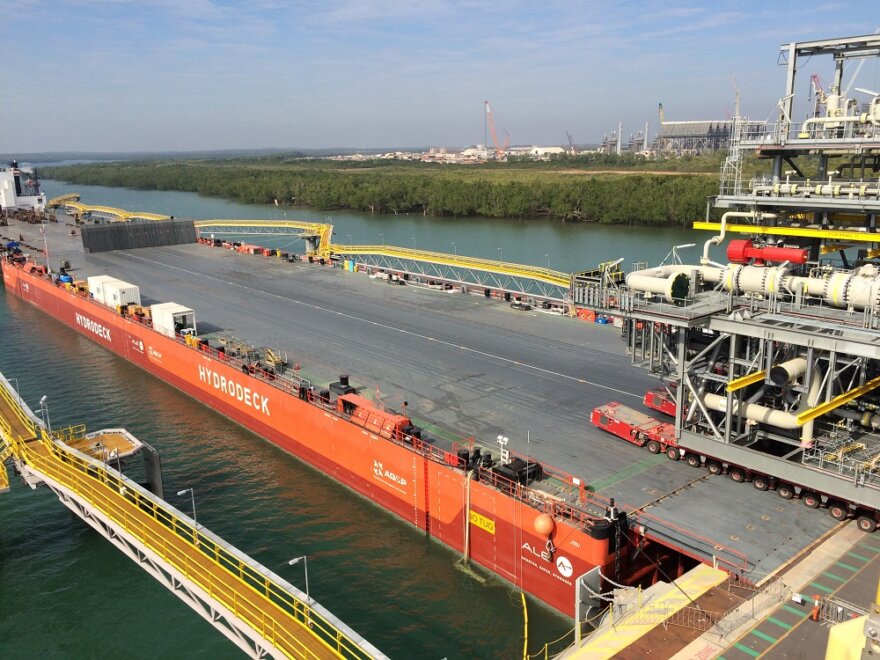 ALE Hydro Deck has completed its scope of work at the Ichthys Project Onshore LNG Facilities in Darwin, Australia.

ALE was contracted by JKC Australia Ltd to load-out 178 pre-fabricated modules from a range of heavy lift vessels.

The scope of work started in June 2014 and the modules were loaded-out by the Hydro Deck’s Operations Team. By utilising the Hydro Deck, a dynamically ballastable transition pontoon owned and operated by AG&P ALE Ventures Pte. Limited, it could be kept level with the Module Offloading Facility in order to safely load-out modules.

One of the challenges the team faced was the daily tidal range up to 8.3m. Depending on the berthing layout and water depths, the Hydro Deck could otherwise provide 100% availability for 24 x 7 load-out operations. The Hydro Deck widened otherwise tide-constrained module delivery windows for the Ichthys LNG Project and provided cost-effective and timely module delivery throughout its charter.

“We demonstrated the capability of carrying out the tasks and working with client feedback, constantly improving every detail. It was this spirit which maintained the quality and safety throughout the operation.

“It was fantastic to be involved in this landmark project, with the AG&P ALE scope spanning almost two years. In its inaugural charter, the Hydro Deck was instrumental in delivering the modules safely and in a time-effective way that no other piece of equipment could’ve achieved.”

Mr. Albert Altura, President of AG&P who worked with ALE to solve the challenge for the Ichthys LNG project with the Hydro Deck said: “Being part of such a prestigious project was an enormous opportunity for AG&P that will leave a lasting legacy. The Hydro Deck is a game-changer for infrastructure delivery and exemplifies innovative, customised module delivery.”