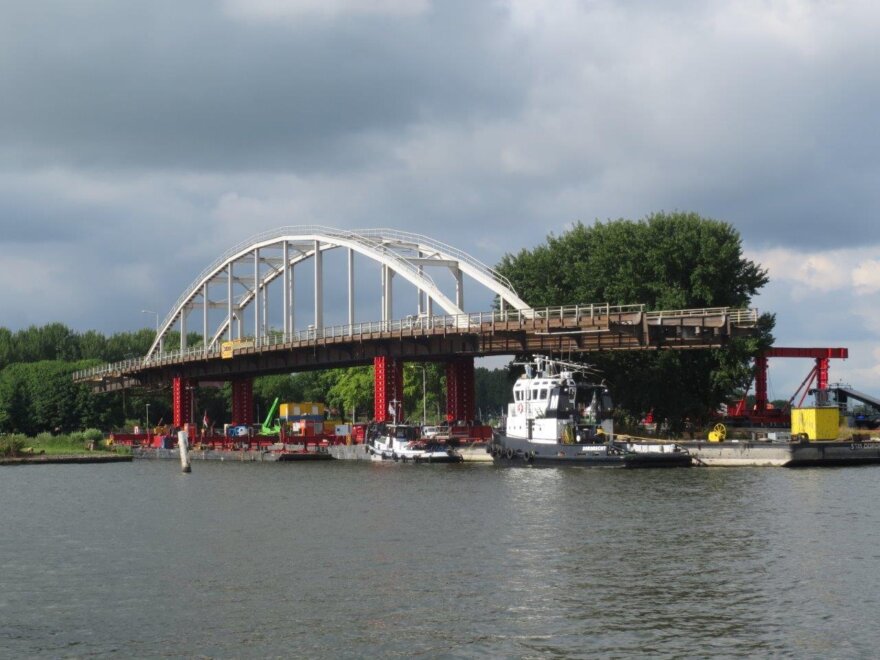 The latest innovation ALE Mega Jack, has been in action for the first time during a large bridge exchange project in the Netherlands.

The Mega Jack 800, launched by the company in June this year, has been used in the successful load-out, transport and installation of the new 1,570t Loenerslootse Bridge over the Amsterdam-Rijn canal in Nigtevecht. It was also used during the removal of the old Loenerslootse Bridge which weighed 1,630t.

The latest piece of technology to be included in ALE’s Innovation Series, the Mega Jack 800 is designed to bridge the gap in the capacities of current solutions and is able to be integrated with other heavylift equipment for a more efficient solution.

The Mega Jack 800 is made up of jacking towers, each with a capacity of 800t, and is totally scalable to accommodate a wide variety of individual projects. Multiple towers can be combined with a starter beam to create 1600t and 2400t capacity per jacking point. For projects that require a multi-application solution the Mega Jack 800 can integrate with other services, such as skidding systems, to provide a complete solution and additional services such as bridge launching.

This first project for the Mega Jack 800 – the exchange of the Loenerslootse bridge, was undertaken by ALE in a number of phases, and also involved the use of climbing jacks, SPMTs, barges, strand jacks, a heavy skid system, as well as 700t and 500t mobile cranes.

The new bridge was to comprise a giant arch and a bridge deck. These were transported by river to Nigtevecht – the bridge deck on three connected barges, and the arch by inland vessel. The arch was lifted out of the inland vessel using LTM1400 and LTM1500 cranes. After lifting, the vessel was removed and the bridge deck was positioned underneath the arch. The Mega Jack 800 was then employed to jack up the 1,250t bridge to 9m from the barge deck.

The remaining phases saw the removal of the old Loenerslootse bridge and the installation of the new one in a highly efficient operation which took just 7.55 hours. The jack-down of the old bridge to demolishing end height again used the Mega Jack 800.

“The fact that the Mega Jack system is scalable to meet different types of requirements gives us the versatility we need for these types of jobs,” says ALE Project Manager Hans de Hoon.