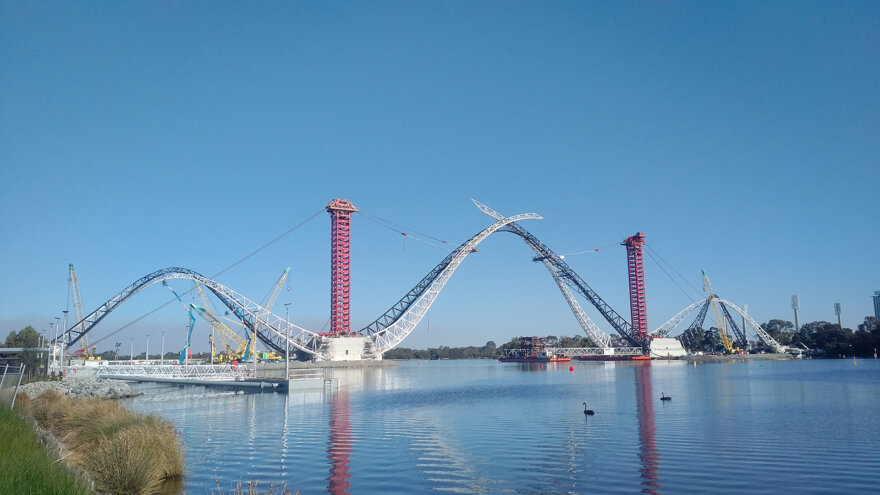 ALE has used its innovative Mega Jack system to lift both halves of the main arch of Matagarup Bridge in Perth, Australia.

ALE executed the complex lifting and installation works for two 400t steel wishbones that form the large central arch of the bridge, with the completed arch reaching 72m above water level at its highest point.

Once the two 120m-long wishbones were lifted into place, they were held securely using the strand jacks until they were welded, to create the complete central bridge arch.

Frank Janssen, ALE’s Project Manager, explained: “We are delighted to be involved in this landmark project for the city. This was a technically challenging operation involving the majority of our transport systems and technical knowledge such as SPMTs, strand jacks, barges, hydraulic jacks and the Mega Jack System. We provided a time and cost-effective solution using our specialist equipment and expert operators. The successful arch installation marks a significant milestone towards the completion of the bridge.”

The final phase involves the installation of five bridge decks by floating under the arch and connecting them to the bridge hangers.

The new Matagarup Bridge, located on the Swan River, will connect the eastern side of Perth city with the Burswood Peninsula, where a new 60,000 seat stadium was recently opened. Built for pedestrians and cyclists only, it forms an important part of the transport options for major events and provides a permanent link for residents and visitors to enjoy parklands and other entertainment.