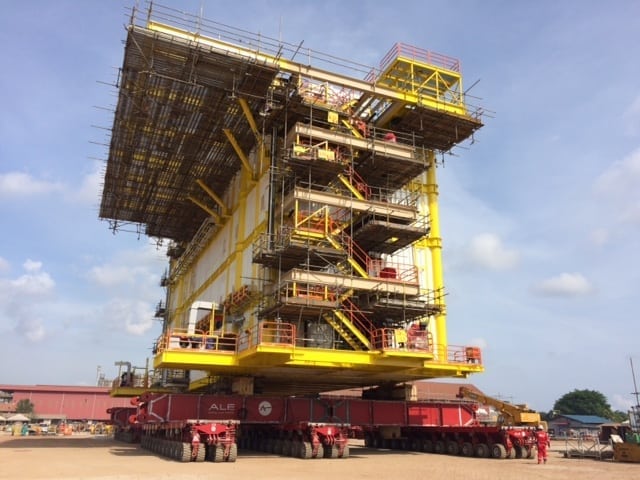 Situated offshore Sabah, Malaysia in a water depth of 1,854 feet (565 meters), is the Malikai oilfield. Operated by Shell, it is currently being equipped with all necessary infrastructures for exploration. Amongst this infrastructure is also a living quarters module. The module weighs a total of 1,293 tons and was recently transported by ALE on sixty axle lines of SCHEUERLE SPMT.

The living quarters module with a total length of forty-two meters and transportation width of thirty meters was fabricated at the Malaysia Marine and Heavy Engineering (MMHE) construction yard around two kilometers afar from ist final destination at the harbour. Prior to the move, a route survey was undertaken to identify the most suitable route. The chosen route included six ninety degree turns as well as several bridges and crossings.

In the early morning, the living quarter module was jacked up and sixty lines of SCHEUERLE SPMT werde placed under the load. Four girders were used to spread the load, highering the center of gravity. This circumstance did not lead to any problems, due to the precise steering and axle suspension of the SCHEUERLE SPMT.

Once arrived at its final position, the living quarter module was lifted and installed on top of the final platform rig by two units of 1,600t crawler cranes.