Allelys do the locomotion with Andover Trailers 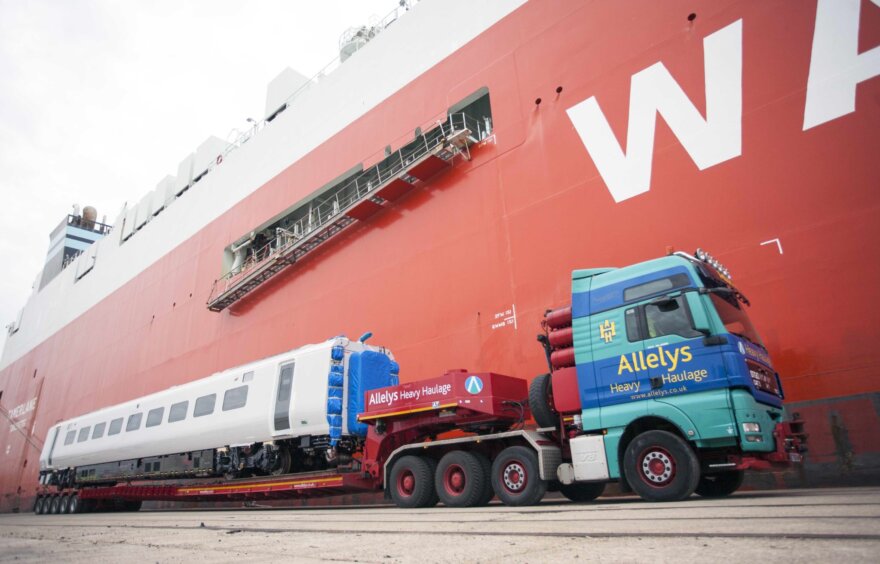 Allelys Heavy Haulage put a pair of bespoke-built Andover Trailers five-axle power-steered low loaders into operation, delivering the first of a new generation of high-tech passenger trains to arrive in the country.

The two low loaders were joined by a third Goldhofer trailer to collect the Hitachi Class 800 train as it was unloaded from a transporter ship at Southampton docks, for delivery to the Old Dalby test track near Melton Mowbray. The train forms the first in the government’s £5.7 billion InterCity Express Programme (IEP), destined to enter service on Great Western from 2017 and East Coast from 2018.

Andover Trailers built each extendable low loader to support the full scope of rail industry work carried out by Allelys, whilst offering the versatility to undertake general heavy haulage duties as well.

Each trailer offers a payload capacity of up to 80 tonnes and can be extended to a total length of 28m; for the new Hitachi trains they ran at just under 26m and operated under STGO Category 3 load conditions.

Robert Ford, Transport Manager at Allelys Heavy Haulage, said: “This was a very high profile movement and the trailers performed well throughout.

“You can’t acquire a trailer for this kind of work off-the-shelf; we liaised closely with the design team at Andover to get the specification just right. Our two companies have worked together over many years and we know from first-hand experience that Andover’s products are built to last.”

Both low loaders feature a 40-tonne capacity neck and a 60-tonne rear bogie, with each axle rated at 15 tonnes and built by Tecma in Italy – selected for its ability to make the specialist solid axles Andover required for the job. The two trailers also feature Goldhofer’s robust steering system, which can reach full lock even when loaded and stationary, ideal for negotiating the tight access often encountered.

Also key to the specification is a hydraulic suspension which allows for 260mm of travel and can cope with the punishing action of driving across rail lines with a heavy load, whilst also offering ample height-adjustment for loading and unloading. A Knorr Bremse road-train module helps to speed-up braking response times, whilst the EBS has been specially programmed to work with the hydraulic suspension. Both trailers also feature rail lines mounted in the floor and winch for loading and unloading.

The trailers collected each carriage of the new train from a pair of rubber-tyred shipping bogies, which had securely held the 125mph train on its journey by sea from Japan.

Allelys Heavy Haulage is renowned in the industry for its ability to move heavy and otherwise abnormal loads. Its combination of more than 20 years’ experience of undertaking such movements and a fleet which includes six Andover Trailers low loaders and more than 100 Goldhofer axle lines means it is well-placed to cater for even the most demanding transport jobs.

For further information on the new IEP trains visit: https://www.gov.uk/government/news/new-state-of-the-art-intercity-express-train-arrives-in-the-uk