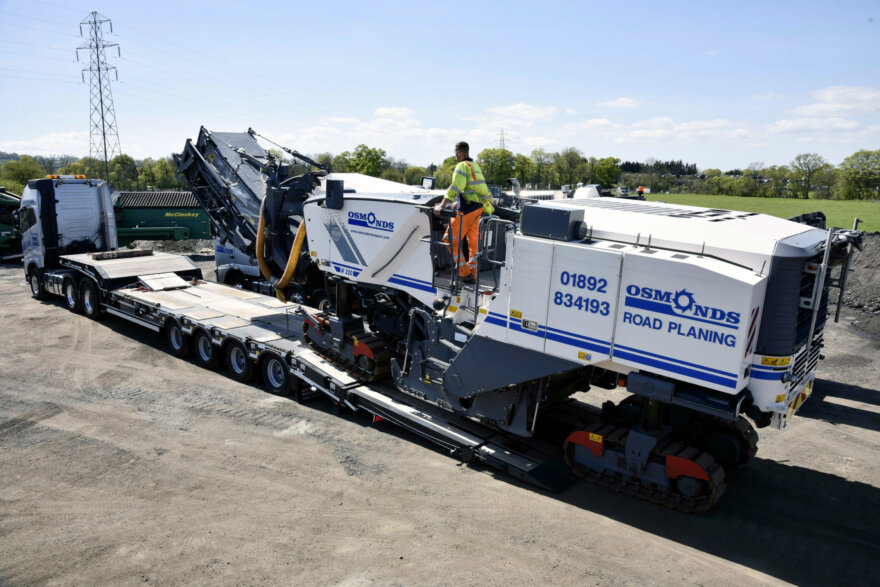 The new 56 and 73 tonne step frames join four Andover Trailers’ products currently in operation with the road planing and plant-moving specialist, which ordered its first trailer from Andover in 1988.

Both trailers stand out for featuring a new generation of box-section slide-out side extension which is stronger, simpler to use, easier to clean and which is now galvanised to ensure a long life in service. Also new to the design is the installation of 10 tonne rated RUD swing-up lashing loops and M36 load securing points built into the load bed to accommodate 14 or 16 tonne screw-in RUD lashings, for easier load securing.

Tom Osmond, Managing Director of Osmonds Transport & Planing, says: “You cannot beat the Andover Trailers build quality. Everything they produce is designed and manufactured to an incredibly high specification – quite frankly, we regard them as the strongest trailers on the market.

“What’s more, you always receive that personal touch with Andover – it’s one of the reasons we keep coming back year after year.”

Both trailers have been built with 1m wide power toe ramps with sliding width adjustment and knife edge toes, to accommodate a wide range of cargoes. This includes an extensive fleet of Wirtgen cold-milling machines operated by the company, which range in size from 15 to 36 tonnes, plus any heavy plant being carried by the transport division.

The SFCL56 and SFCL73 step frames are equipped with three and four SAF axles respectively, with a rear-steering capability. Disc brakes, Andover’s own safety-light system and robust 285/70 R 19.5 tyres – the largest fitted to any step frame in the Andover Trailers range – add to the impressive specification.

Finished in ‘midnight blue’ paintwork, they have also been pre-fitted for a working at height safety system on the neck, to allow for easy retrofitting at a later stage.

Both trailers will cover more than 50,000 miles annually and are in operation across the South of England up to seven days a week.