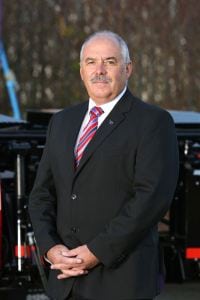 Jones takes on the position following the retirement of Sales Director Ivan Collins, one of the original founders of the company in 1985.

Commenting on the appointment, Tim Wright, Managing Director, says: “Clive has spent over a decade with Andover and his knowledge of the heavy haulage trailer market is second-to-none. He’s ideally suited to taking on this strategic role within the business.”

Jones is based at the company’s head office and production site in Andover, but will spend significant time visiting customers across the UK and Ireland developing new contacts for the company. He is also tasked with promoting the fast increasing market for Goldhofer products in this area.

He will be supported in his new role by Carl Steel, 26, who joins the sales team as Sales Manager for the North of England and Scotland. He will cover all territory north of the M62, and enters the plant body and trailer sector with a passion for the commercial vehicle industry.

Collins, 67, began his career as an apprentice at Taskers of Andover in 1962 when he was just 15 years old; at a time when trailers were still fitted with vacuum brakes. Always passionate about bespoke design and build quality, Collins is immensely proud of the hundreds of plant bodies and trailers he has helped to create and build over three decades at Andover Trailers. One of the most notable was an order for a bespoke five-axle low loader built to carry a huge 120 tonne bulldozer in an Estonian oil shale mine, which Collins delivered personally in 2011.

“We set about building them a trailer which we were confident could do the job; the first time it was tested was in the mine, and three years later it’s still hard at work.

“Unlike truck manufacturers we don’t have the luxury of building prototypes and testing them over millions of miles before they enter service – what we design and build has to work from the outset. I’m incredibly proud of what we’ve achieved at Andover Trailers; it’s a fine example of British engineering and manufacturing.”

Summing up his career, Collins adds: “I would never have imagined when I started at Taskers as a boy that I would have finished where I have. The support of my colleagues, customers and friends along the way has been fantastic.” Collins, who lives in Andover, is looking forward to enjoying his retirement with his wife, three daughters and six grandchildren.