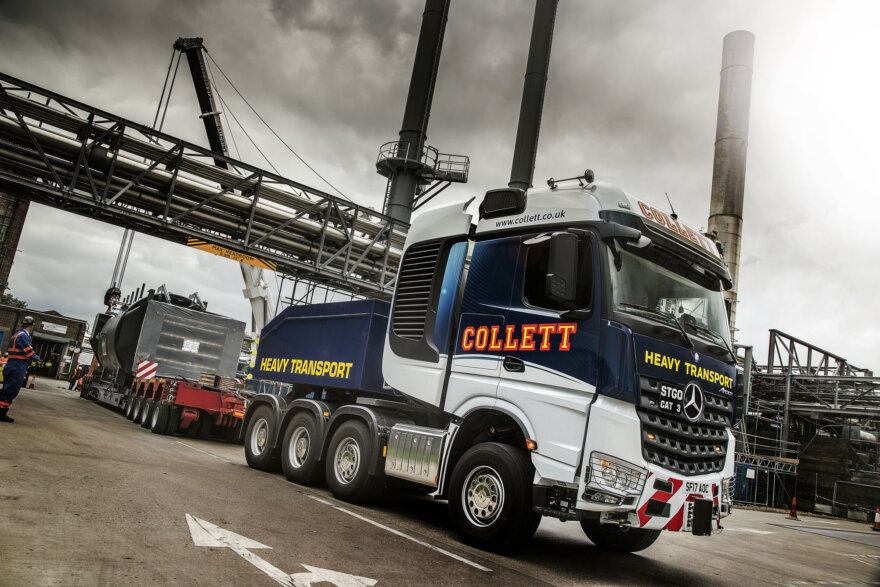 Winner of the prestigious Operator of the Year trophy at 2017’s The Heavies awards – its second success in the last three outings at what are widely recognised as the specialist transport sector’s ‘Oscars’ – the Halifax-based operator acquired its Arocs from Scottish Dealer Western Commercial.

They feature the ground-breaking Turbo Retarder Clutch, which works in conjunction with the 16-speed Mercedes PowerShift automated transmission, in place of the traditional manual gearbox and torque converter clutch set-up.

Designed to be wear-free and fuel-efficient, the Turbo Clutch is capable of handling and delivering some 3,000Nm of torque, significantly more than a torque converter. It also incorporates its own, powerful integrated retarder; without this, a separate retarder would be necessary to assist the high-performance engine brake in bringing a fully-loaded 250-tonne rig safely to a halt.

Geoff Davies, Western Commercial’s dedicated Heavy Haulage & SLT Specialist, and an expert on the sector, also supplied Collett with a pair of Actros tractor units – a 120-tonne 2651 model and a 2548 plated at 68 tonnes – earlier this year.

The two Arocs SLTs were on static display at The Heavies, where the high-profile operator won praise from the judges as an “extremely professional, highly competent and innovative specialist heavy hauler”.

Collett’s Heavy Lifts Project Director Eric Crosby oversaw the planning and delivery of the first major contract in which the two trucks worked together, which entailed transporting a pair of huge steam boilers from Immingham harbour in Lincolnshire to a paper mill in Snodland, Kent. Each boiler was 15 metres long, close to five metres wide and weighed 85 tonnes. The 200-mile journey took the trucks along stretches of the M11 and M25 motorways, and over the Thames at the Queen Elizabeth II Bridge.

“Our drivers were highly impressed with these fantastic pieces of equipment from Mercedes-Benz,” confirmed Mr Crosby. “The Turbo Retarder Clutch was particularly impressive, very smooth under load and extremely user-friendly.”

The Arocs are equipped with hydraulic systems and Rockinger couplings front and rear, designed specifically for use with the multi-axled Scheuerle modular trailers on which the boilers were carried. Collett’s fleet of 130 trailers also includes low-loaders and extendable trailers capable of carrying wind turbine blades up to 60 metres long.

Managing Director Dave Collett added: “Heavy haulage can vary so much from one task to the next that you don’t really start to see the whole picture until a vehicle has been in service for a couple of years. In our business, the only way to properly test a truck is on the job, over a long period of time, so that’s what we’ll now be doing with these Mercedes-Benz units.

“We’ll continue to benchmark their performance against our other heavy trucks, focusing particularly on their fuel efficiency but also their maintenance costs, driveability and comfort. They need to demonstrate longevity too – vehicles like this don’t come cheap, and not until they’ve provided efficient, reliable service for five years or more will they really repay the investment. On the evidence of this first proper challenge, though, it’s fair to say the early signs are very promising indeed. The Arocs performed superbly and our drivers were full of praise.”

Collett began life as a small transport company in 1928 but has grown and diversified significantly since then. As well as undertaking general and heavy haulage, the company has heavy lift, marine and consulting divisions and operates subsidiary depots in Goole and Grangemouth.

Mercedes-Benz SLT chassis are exceptionally robust, their strong, reinforced frames having no joints or welds, and provide the ideal mount for heavy duty front and rear coupling points. They are also instantly recognisable, due not only to their fourth axles (where fitted), but also to the large side panels at the rear of the cab. These direct airflow for enhanced cooling of the clutch via a radiator mounted in the tower behind the cab. This tower also houses various ancillaries such as the air and fuel tanks, and batteries.