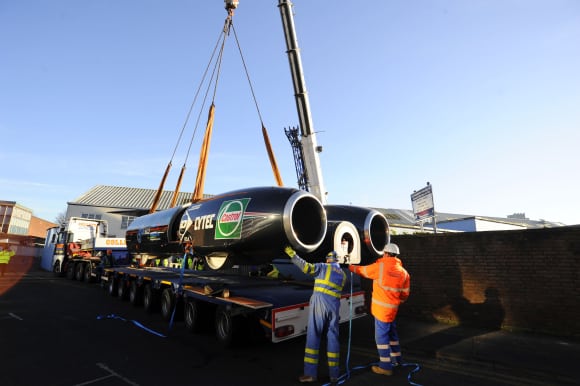 The world’s fastest car, Thrust SSC and its predecessor Thrust 2 took to the roads this weekend with the help of Collett. With Coventry Transport Museum currently undergoing a £8.5m redevelopment project, Collett were called upon to execute the daring relocation of the two record breaking cars.

Since 2001, four years after smashing the World Land Speed Record in the Black Rock Desert, Thrust SSC has been a centrepiece in Coventry Transport Museum’s collection. Its predecessor Thrust 2, also part of the Museum’s collection, held the Land Speed Record from 4th October 1983 with a speed of 633.468mph until 15th October 1997 when Thrust SSC broke the sound barrier achieving a speed of 763mph.

The project involved the relocation of the two vehicles from the Museum’s Spirit of Speed Gallery to their new Biffa Award Land Speed Record Gallery, set to open in early 2015.

MFH Construction Projects, project managed the relocation for the principal contractors J Tomlinson. Months in the planning the relocation required specialist slinging, lifting, transport and logistical solutions, all meticulously detailed by the Collett Heavy Lift Team long before the actual move. This was planned to perfection and with specialist insurance up to a value of £14m in place to cover all aspects of the move the Collett Heavy Lift Team arrived on site bright and early at 6:30am ready to get underway. 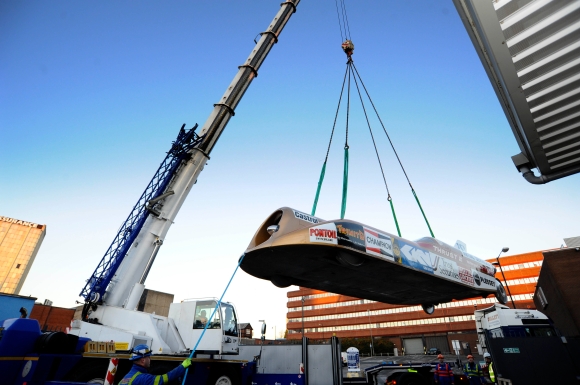 With all teams in place Thrust 2 was hoisted over the rear gates of the Museum to Collett’s awaiting low loader. A delicate process, the valuable cargo was expertly guided into place by the Collett Team and secured for its short journey.

The next Collett trailer was manoeuvred into position ready for Thrust SSC, this time a 7-axle wide trailer to support the extra wide wheel base of the vehicle. The 54ft long, 10 Tonne supersonic car followed in the footsteps of Thrust 2, and was lifted over the gates of the Museum and delicately secured into position.

A new experience for the two fastest cars in the world, they were then driven at walking pace around the outskirts of the building and reversed into position ready to be unloaded and carefully lifted into their new location. One at a time, the vehicles we’re once again hoisted into the air and delicately delivered to their new location for Museum staff to manoeuvre into position. 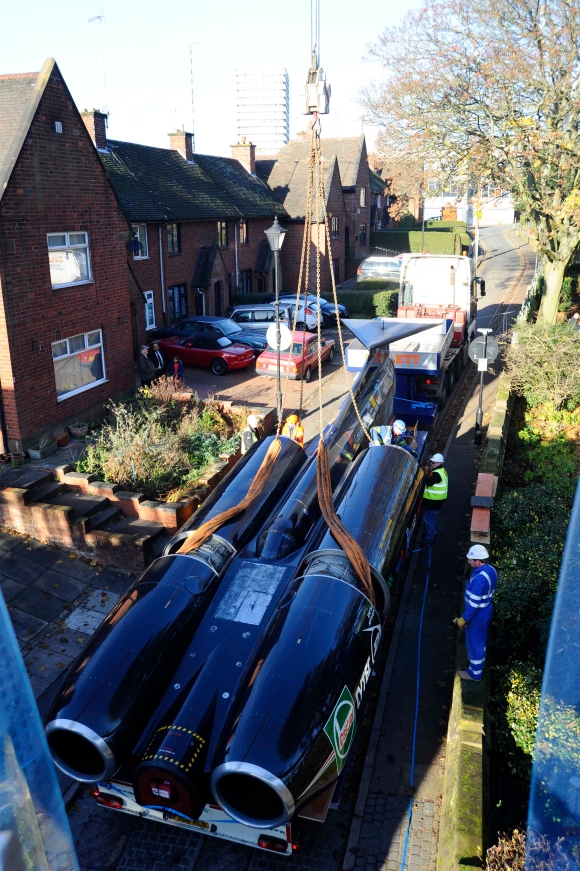 Collett’s Heavy Lift Team proved their expertise and precision throughout the project gaining praise from MFH Construction Projects, the company responsible for appointing Collett to undertake the move, “we would like to thank Dave and his team for an outstanding job. We have undertaken various types of lifts as a company for over 40 years, and this one has to be high up in the list of our top 10, if not the best.”

The expert planning by the Collett Heavy Lift Team resulted in a seamless execution of the project and positive feedback from all involved.