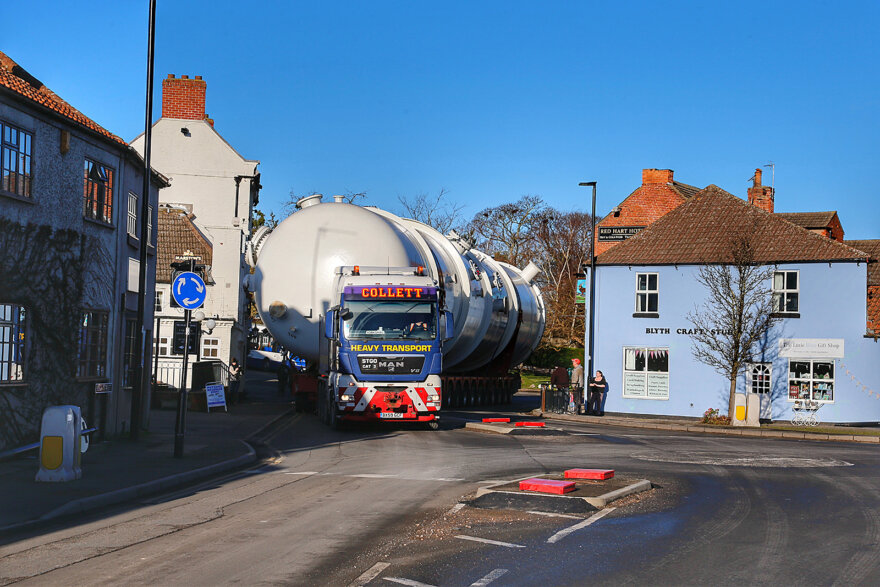 Due to the size of the loaded vehicle our Team completed several Route Access Surveys studying in detail each section of the route to highlight any modifications which may be required. Although the convoy would utilise a high load route for part of the journey the smaller roads and villages required close attention to ensure the loaded vehicle could safely navigate the topography. Alongside the Route Access Surveys several Swept Path Analysis exercises provided a further insight into the suitability of the route and the environmental factors which may impede the project.

This meticulous planning identified extensive street furniture modifications and removals which would be required to ensure that the 28.3m (L) x 5.64m (W) x 5.65m (H) cargo could safely navigate the 112 mile route from factory to portside. This included the removal of gates, sign posts, traffic lights and bollards, the ramping of curbs and the partial surfacing of a roundabout. Tree pruning would also be an essential part of the preliminary preparations ahead of the transport project taking place with numerous sections pre-trimmed to a height of 6.8m to ensure the loaded vehicle could pass unimpeded.

With the street furniture removed and the foliage trimmed the next challenge would be the power cables along the route. The 6.7m loaded height of the vehicle would not be able to safely pass under each cable and as a result Western Power, National Grid and Northern Power Grid agreed that during the transport there would be ten separate power outages in place.

With all the extensive modifications to the route completed and the Special Order (BE16) permit in place Collett mobilised the Team and headed to Charles Thompson’s Kilnhurst manufacturing facility to begin the project.

Arriving on a Friday with a 4 axle ballast tractor and a modular drawbar 16 axle trailer complete with power boost module Collett utilised Charles Thompson’s Mega Lift System to load the 140 Tonne vessel. Having devised detailed transport drawings and lashing plans, our Team secured the vessel to the modular trailer ready for onward transportation. At 7:30am the following morning accompanied by South Yorkshire Police, cable lifting teams, tree trimming teams and a photographer we began our journey.

The first stage of the project took us from the manufacturing facility in Kilnhurst through to Newark where a Temporary Traffic Restriction Order had been implemented to allow the loaded combination to utilise the A46 Northbound Brough layby as a stopover. Although pre-trimming work had already been undertaken, three tree teams headed the convoy across Rotherham, Doncaster and Nottinghamshire to ensure that no foliage would impede the vehicle as it made its way along the route. Coupled with this, four cable lifting engineers accompanied the load to manually raise any obstructing wires whilst the hydraulic suspension of the trailer allowed for the lowering of the trailer bed if required.

Throughout the day the convoy safely navigated the towns and villages of South Yorkshire and Nottinghamshire, drawing attention from residents before safely arriving at the appointed A46 layby later that afternoon.

As Sunday morning arrived the convoy began the second stage of the journey under escort by Lincolnshire Police and, once again, accompanied by tree and cable teams. As identified in the Route Access Surveys, on leaving the A46 layby the 6.7m high loaded vehicle immediately faced a 6.5m high bridge. In order to safely clear the structure our Team employed the trailers hydraulic capabilities to lower the suspension. With the trailer at its minimum this effectively lowered the height of the cargo to 6.4m allowing the combination to be driven at walking pace underneath the bridge. Once clear of the structure the hydraulics on the trailer were raised to their original height and the convoy continued on utilising the opposite side of the carriageway and employing contraflow manoeuvres on several occasions before arriving later that day at the Port of Immingham.

With the awaiting vessel already at the Port, on Tuesday morning Collett utilised the Power Boost Module to manoeuvre the trailer and position the cargo alongside the ship. Loading directly from the trailer, the heavy lift vessel’s two integral cranes safely transferred the 140Te deaerator vessel from the trailer to the hold of the ship for onward shipment to final destination.