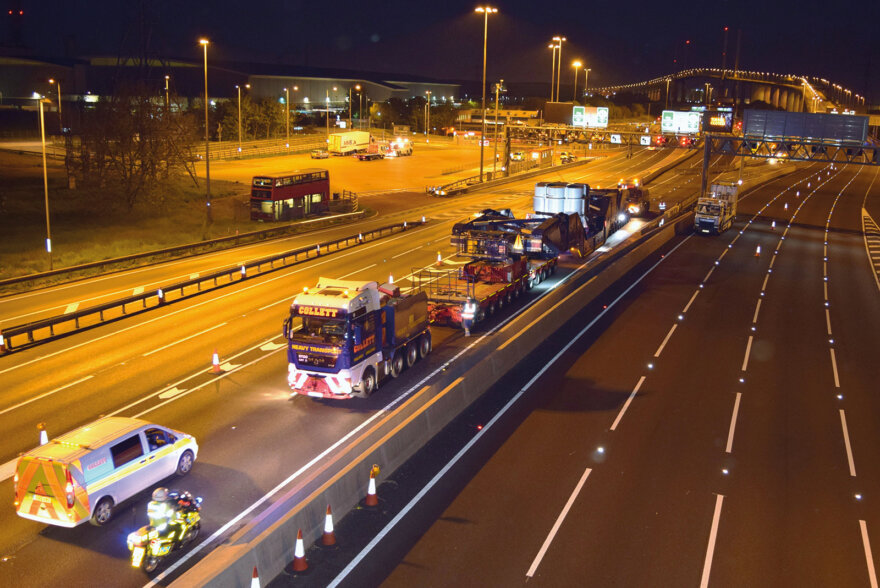 At a joint event in Pfedelbach on Wednesday 25th June, the new SCHEUERLE STB 550 girder bridge, with a payload of 550 tonnes, was unveiled and officially handed to new owners Collett Transport.  Presented by SCHEUERLE and TII Group, the impressive STB 550 is not only extraordinary due to its 5.2 ratio between payload and deadweight but also due to its flexible modular combinations.  Currently unrivalled in Europe, the STB 550 without load distribution frame features a factor of 6.6.

“Today we are delighted to present a ‘ready for operation’ side girder deck which utilises the ratio of 5.2 between payload and deadweight. However, if we omit the load distribution frame, as is common within the marketplace when calculating this figure, the factor becomes a currently unrivalled 6.6”, stated Bernd Schwengsbier, Managing Director of TII Sales, the sales organisation of the TII Group which encompasses the companies SCHEUERLE, NICOLAS and KAMAG. “At the same time, the STB 550 is much more versatile than comparable products on the market and thus guarantees Collett a headstart within the industry”.

During the handover event, and in the run up to the ceremonial unveiling of the girder bridge, Lincoln Collett, Technical Director for Collett Transport, expressed his thanks to SCHEUERLE: “The new girder bridge closes the last gap in our fleet. The cooperation between Collett and SCHEUERLE has worked excellently and we are extremely satisfied with the outcome.”

Dr. Axel Müller, Managing Director of the TII Group, underlined the synergies within the Group during the technical design and planning stages: “It is with great pride that we present the STB 550 to Collett Transport, having collaborated very closely in the planning phases, SCHEUERLE, NICHOLAS and KAMAG have created a product which encompasses the knowledge and expertise of all three companies.”

Collett Transport will initially use the STB 550 for the transportation of 350-ton transformers but has, at any time, the option to increase to a 550-ton full version with the installation of a second deck set. STB 550 offers several options for accommodating generators and transformers with different dimensions and supports. Through this, the STB 550 will enable Collett Transport to efficiently handle a vast range of different loads.>

In connection with the main beam, the load is placed on the top boom with brackets. As an alternative, load can be supported with additional load suspension gear with cross beams. The cargo can also be coupled directly to the supporting tips completely, without the main beam. Furthermore, the side girder deck can accommodate and lower the cargo without the use of cranes due to additional support chassis. The deck offers flexible fields of application with a length ranging from 29,200 mm up to 34,200 mm – adjusted to the required number of axle lines of the platform trailer combination and the size of the cargo. The loading width of the side girder deck can be continuously set from 3,450 mm up to 7,400 mm and thus be adapted to the width of the cargo. The vertical lifting of the deck in the load acceptance area is 1,650 mm.

The SCHEUERLE STB 550 is compatible with the SCHEUERLE Combi series, the NICOLAS MHD as well as the self-propelled modular transporters (SPMT) as 2-, 3- and 4-file types. To allow the user to continually monitor the bridge along with its valuable cargo during transportation, it can, at any time, be equipped with a heatable two person high-tech cab. Monitors situated inside the cab will allow the cargo to be observed at all times during the transport via cameras directed towards the main beams.