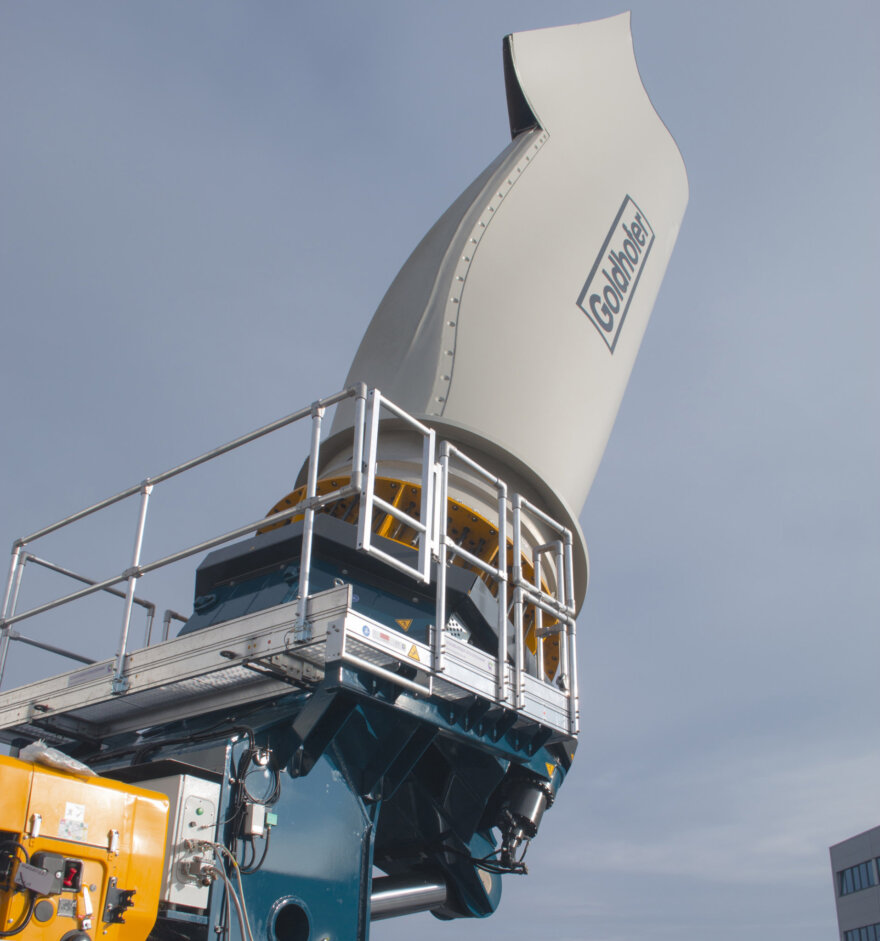 Founded in 1968, Denzai Group is one of Japan’s leading heavy haulage companies and engineering service providers, with eleven national sales offices and eight machinery centres plus additional sales offices in Malaysia and Bangladesh. Denzai maintains its position as market leader with a multidisciplinary team of experts and an extensive fleet of vehicles offering modern solutions to almost every transportation challenge. For many years, the company has placed its trust in products from Goldhofer and already has 24 THP/SL heavy-duty axle lines, 14 PST/SL-E self-propelled vehicles with electronic multiway steering and various accessories such as vessel bridge and turntable.

At the beginning of 2018 Denzai made further additions to its Goldhofer fleet and became the first company in Japan to have both an »ADDRIVE« and the FTV 500 blade transport device from the Memmingen-based world market leader for heavy-duty and special transport solutions. With the »ADDRIVE« the Japanese have opted for the revolutionary Goldhofer system combining the characteristics of a pulled trailer and a self-propelled vehicle which has become a new benchmark in the international logistics industry as a flexible all-in-one solution.

Denzai has also invested in RA 4 tower adapters to meet the growing logistics requirements of the Japanese energy industry. Denzai’s range of equipment also includes heavy lifting cranes in various capacity classes. The company is thus in a position to provide its customers with a wide range of logistics and engineering services for infrastructure and construction projects, including renovation work on petrochemical plants and steelworks, infrastructure projects such as dam and bridge construction, and today’s growing numbers of wind farm construction projects.

The Japanese government wants wind energy to play a much more important role in the country in the future. In 2017 alone, wind power plants with a total generating capacity of 300 megawatts were built compared with just half that figure in the previous year. According to the Japanese Wind Power Association (JWPA), total generating capacity in Japan is expected to triple to ten gigawatts by 2020 and then grow to 75 gigawatts by 2046.

With the acquisition of Japan’s first FTV 500, Denzai has set the stage to benefit substantially from the expected increase in demand for logistics services in the wind power industry as the technology leader for rotor blade and plant component transportation. The FTV 500 is the industry flagship for rotor blade transportation. With the help of an adapter it is also possible to use the rotor blade adapters (RBA) which were originally designed for the smaller FTV 300. This means that almost all the rotor blades on the market can be mounted and – thanks to the innovative tilt system – raised by up to 60 degrees so that even narrow sections of the route can be easily negotiated for additional time savings.

In December 2017, a Denzai delegation visited the Goldhofer plant in Memmingen to thoroughly familiarise themselves with the handling of their new equipment. As a result, Denzai were able to integrate both the »ADDRIVE« and the FTV 500 into their daily work immediately after delivery in January 2018, and various transport operations have already been successfully completed.