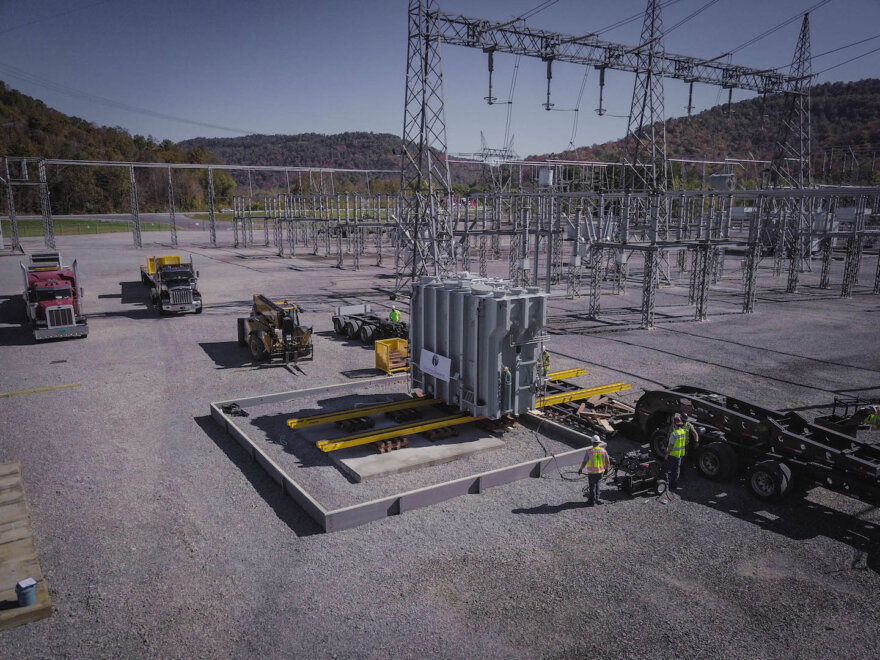 A Hydra-Slide hydraulic skidding system, turntable and related products combined to provide a suitable alternative to a crane as transport and heavy rigging firm Dynamic Specialized replaced a transformer at a facility in Northern Virginia recently.

Josh Sohler, operations manager at Dynamic, said: “This was a difficult project for us to secure as the local crane company had done a very good job of convincing the client that a jacking and sliding system was simply too slow and they could beat our schedule. While our method was already more cost effective it took some convincing to demonstrate that we could get the work done at the same pace, once they factored in crane set-up time etc.”

The alternative solution utilised Dynamic Specialized’s HT500 heavy track hydraulic skidding system and a Hydra-Slide turntable of the same capacity. The HT500 was employed to slide the loads, while the turntable rotated the larger transformer 90 degrees —a requirement due to leaving it “fully dressed”, as Sohler explained.

He said: “The transformer was scheduled to be disassembled, drained and have all of the bushings removed as they had originally planned on the crane lift. Once onsite, we worked with the other contractors to evaluate the conditions and special limitations, and decided we could in fact move the heavier transformer fully dressed from its storage location to its final pad, providing we could rotate it to create clearance for the radiators. Our method shaved several days off the original schedule as the unit did not have to be disassembled or reassembled in its final resting place. The project was an eye-opener for the client on the potential of the Hydra-Slide range.”

Sound investment
Dynamic Specialized’s fleet also includes Ekki hardwood jacking timbers, a gasoline-powered pump and jacks. However, Sohler acknowledged that it is likely to place orders for additional equipment in the future. He said: “We did not have a single specific job in mind for our initial purchase but we had several projects with similar needs. The Hydra-Slide system allowed us to cover a multitude of project ranges and proved to be a much better investment that we even initially thought. As a comparatively smaller company to some of our competitors, we wanted a turnkey system that would allow us to keep our focus on our business goals and not on piecing together our rigging systems from various vendors; Hydra-Slide offered us this solution.”

Dynamic’s work inherently lends itself to utilisation of the Canadian manufacturer’s range of products, as the majority of contracts involve receiving project cargo from the nearest railhead, offloading it onto transportation, and setting units on foundations. Loads can include transformers, generators, heat recovery steam generators (HRSG), and other large or over-sized items.

Sohler concluded: “The Hydra-Slide staff and products are second to none. The system and support have been, and continue to be, well over our expectations and we could not be happier. Many of our local competitors are either still using older, ‘homemade-type’ systems or utilising larger class (and much more expensive) cranes to do the same work. The Hydra-Slide system is quick, clean, safe, and controlled; we continuously receive compliments before, during, and after projects.”