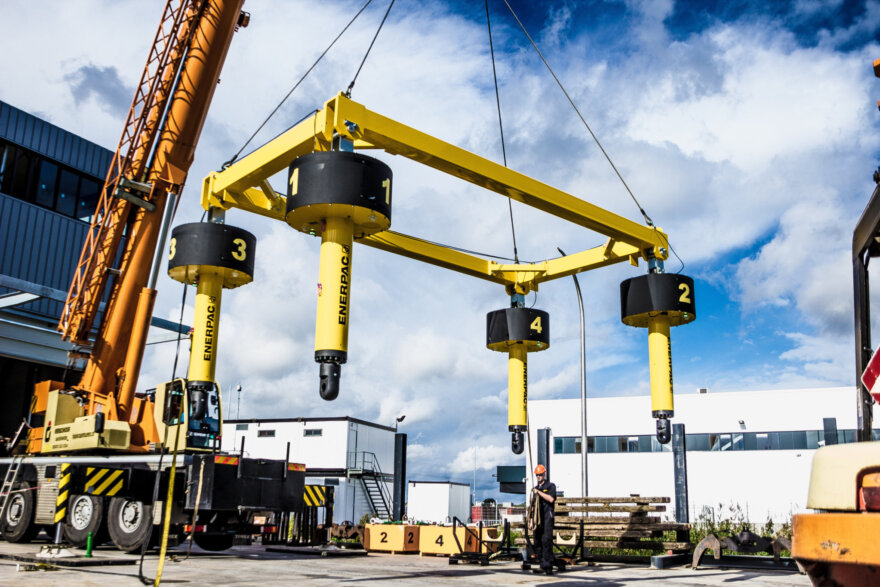 Synchronised, multi-point lifting is the theme of the Enerpac stand at Bauma 2016. Enerpac is featuring the industry leading, EVO-Series Synchronised Lifting system, and new EVO-Mini for smaller lifting jobs. In addition, it will be demonstrating the Bauma Innovation Award finalist, the SHAS-Series – Autonomous SyncHoist system – enabling accurate positioning of heavy, unbalanced loads with a single crane. Enerpac’s new bolting tools the PTW-Series pneumatic wrenches and S&W-Series torque wrenches will also be shown on the Enerpac stand.

Synchronised Lift
The EVO-Mini combines high pressure hydraulics with a PLC system to monitor and control precise movement and positioning of heavy loads in a compact simple-to-use package. It can be used with standard 700 bar single or double acting cylinders to control up to 8 jacking points with one hydraulic power unit (HPU).

Alternative Lifting – Enerpac Jack Up Systems (EJ)
Enerpac is also announcing the EJ500 and EJ5000 series Jack Up systems, a custom developed multipoint lifting system. A typical system set up includes four jack up units positioned under each corner of a load. A four unit jack up has a lifting capacity of 2,000 ton (500 ton per unit). The EJ500 has an external power unit and lifts up to 10m, the EJ5000 has an internal power unit and can lift up to 20m.

High Capacity Gantries
The Enerpac stand will include the SL400-Series gantry crane capable of lifting 408 ton. Hydraulic gantries are a safe, efficient way to lift and position heavy loads in applications where traditional cranes will not fit and permanent overhead structures for job cranes are not an option. When used with a roller track, the gantries provide a means of moving and placing heavy loads.

For heavier lifts, Enerpac is announcing the MBL-series hydraulic gantries for loads up to 600 ton lifted to over 14m. The MBL series offers high levels of stability allowing lifts using two legs as well as four legs.

The six axle SPMT600 can move loads up to 60 ton. Multiple configurations are possible with up to three SPMT units supported by a single hydraulic power unit. A major operational benefit of the SPMT design is the ability to fit two SPMT600 units and power pack in a single 20 foot container.

For more information on Enerpac at Bauma 2016 visit www.enerpac.com.