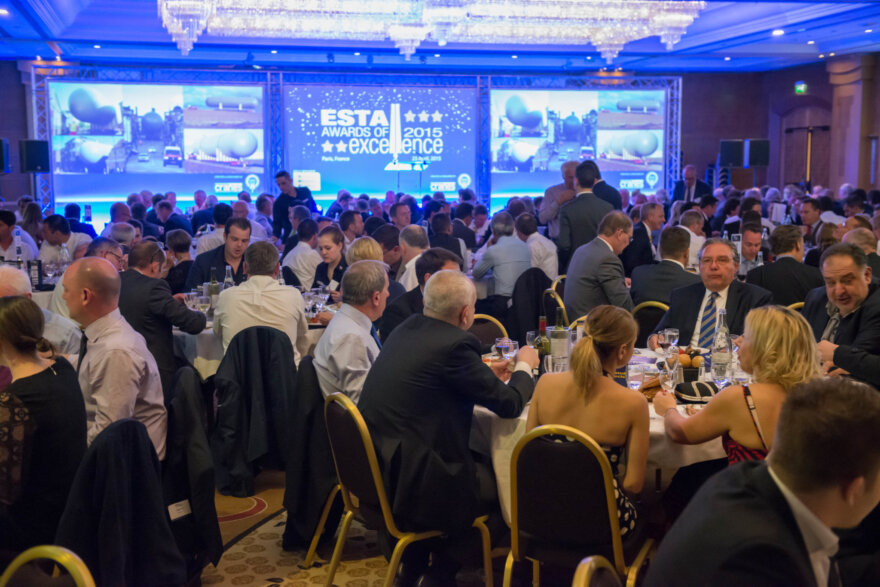 After an opening speech from ESTA president and managing director of UK heavy haulage company Collett & Sons, David Collett, the presentation of awards got underway. The winners of the ESTA Awards 2015 were as follows:

Combined techniques
Sarens (Netherlands)
For its work involving the renovation of the second busiest bridge over the busiest waterway in the Netherlands.

Cranes, telescopic, lifting capacity over 120 tonnes
Vernazza Autogru (Italy)
For a job which involved removing a locomotive and first carriage of an intercity passenger train that had been derailed by a landslip.

Safety
Mammoet Europe
For the innovative COGAS Auxiliary Hoist which constantly adjusts the position of the hook to a centre of gravity during a lift.

Cranes, telescopic, lifting capacity less than 120 tonnes
Wagenborg
For a project to lift air conditioning equipment onto the roof of the Ministry of Public Health and Social Security in the Netherlands.

Innovation – end user
ALE
For the development of the Mega Jack 800.

Transport: trailer and load over 120 tonnes
ALE
For the transport of a transformer from Stafford, UK to Ellesmere Port.

Cranes, lattice boom
Sarens (Belgium)
For the erection of three wind turbines for the Enercon wind park in the Netherlands using a Terex CC 8800-1 equipped with the new Boom Booster.

Innovation – manufacturer
Liebherr-Werk Ehingen
For its innovative new crane, the LTM 1300-6.2, which incorporates a completely new concept for the superstructure drive unit – a single carrier engine.

SPMT
Mammoet Europe
For the assembly of two 5,000-tonne decks for a new bridge over the Botlek waterway in Rotterdam at the Mammoet Heavy Lift terminal in Schiedam.