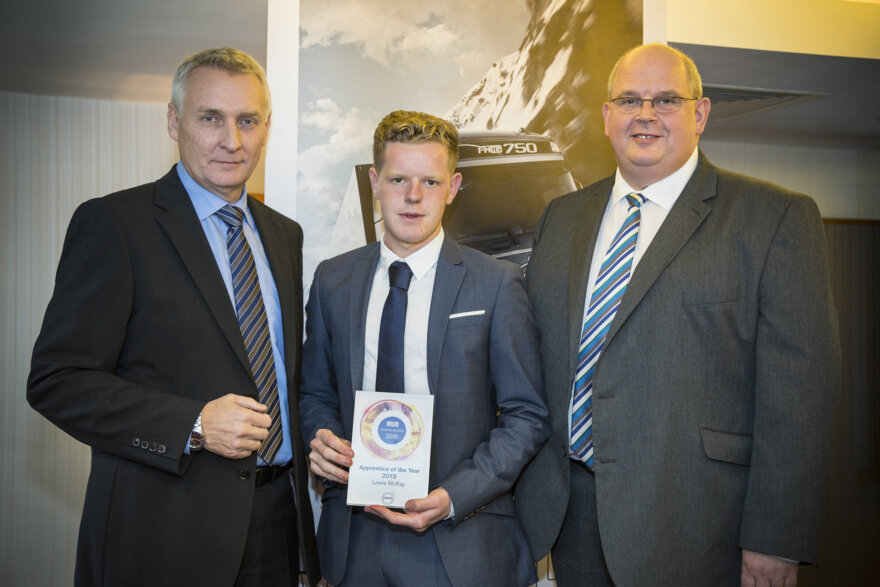 ‘Jim Keyden’ Award 2015, which is awarded to the graduating Apprentice of the Year, has been won by Lewis McKay from MC Truck and Bus, Maidstone.

Inaugurated in 1995, the Volvo Apprentice Academy, described by Volvo Group UK’s Managing Director Arne Knaben as ”The best and most advanced truck manufacturers’ Apprentice Programme in the UK”, celebrates its twentieth anniversary this year.

The ‘Jim Keyden’ Award, inaugurated in 2008 in honour of Jim Keyden, who along with Jim McKelvie first brought Volvo trucks to the UK in 1967, is made annually to the Graduating Apprentice of the Year.

Congratulating Lewis McKay on winning the Award, Arne Knaben said that he had ‘gone the extra mile with assisting his tutors and also acting as a role model for the rest of his group’.

This year’s Academic Achievement Award was won by Adam Cornish (image below) from Truck and Bus Wales and West, Avonmouth.

The annual Vocational Achievement Award was collected by Jonathan Clarke (image below) from Crossroads Truck and Bus, South Elmsall.

This year also saw the launch of a new Award, sponsored by ‘Volvo Truck Driver’ magazine. The ‘Grafter’ Award was presented to Callum Hetherington (image below) of Volvo Truck and Bus Centre North & Scotland from Broxburn near Edinburgh by Volvo Truck Driver Editor Matthew Eisenegger.

According to Volvo Commercial Academy Manager Adam Plastow, some of the factors that helped Callum lift the trophy for the new ‘Grafter’ Award included his consistently excellence performance on workplace observations, plus his good portfolio and work evidence. However in the main, it was awarded because of Callum’s integration into working life from full time education, and how he had positively and effectively approached this.