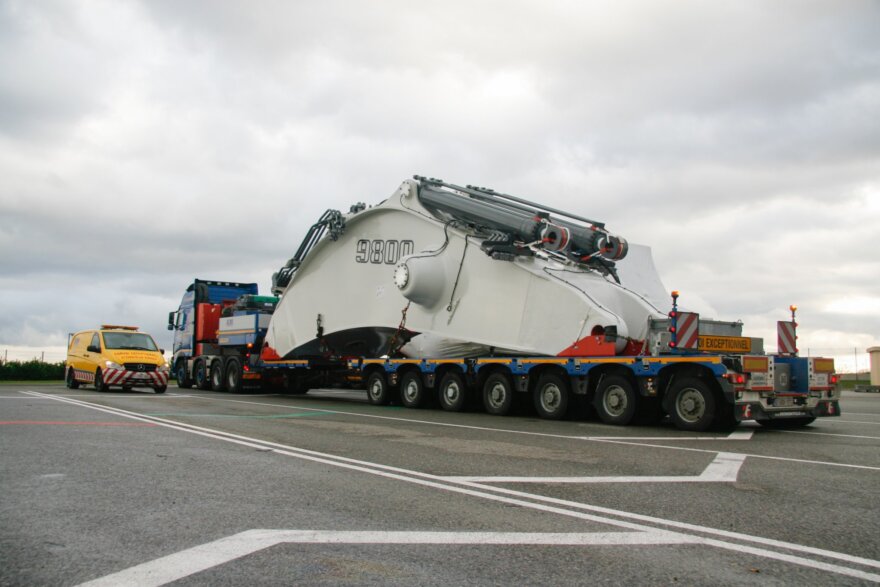 Flexibility, speed and efficiency: three essential elements of the CombiMAX idea. Moreover, it generates concrete cost and time savings for the user. No other vehicle makes possible such high payloads as does the CombiMAX. An award-winning design – let´s hear from the users:

Jussi Alamäki, manager of transport company based in Tornio (Finland), uses his 3+5 combination both as a lowbed and as a telescopable semi-low loader thanks to the Add-On-Beam extension. “It´s great that the vehicle is so flexible. This is why we can offer our services at competitive rates. Our 3-axle bogie can be easily removed or built in as needed. Even with the heaviest loads the CombiMAX can be operated very easily and the steering functions better than with other semi-trailers“. In the meantime, Alamäki has integrated as another modular element an additional 1-axle bogie (joker axle) into his previous combination. Jussi Alamäki (Maanrakennus Alamäki Oy)

“Flexible and always within the legal parameters“

“The reliability and the load rating“ – Joost Rijk from the Dutch company Zwaar Transport Zeeland associates these two advantages with the new CombiMAX concept. Faymonville delivered to Vlissingen a 2+4 combination together with lowbed and as variable addition the joker axle. The customer transports for its projects primarily heavy machinery as well as oversized goods. For Joost Rijk, the CombiMAX is an ideal and future-oriented solution. “With the coming changes in the European legislation, such a vehicle is a must. It gives you the necessary flexibility to fulfil different customer requests while complying with the legal requirements at the same time“. Joost Rijk (Zwaar Transport Zeeland)

“The variable length is very useful“

The CombiMAX is making waves in the sector outside Europe as well. For example, Karmiel Transporters Ltd. from Haifa in Israel added one of the first built semi-trailers of this type to its fleet. “This vehicle is very useful for us thanks to its variable length“, says Michael Tesker about the Add-On-Beam extension. This is unique for modular semi-trailers. “For a large port project we could simultaneously load three concrete cubes of 40 tonnes each on our CombiMAX. This reduced our costs by one-third“. The quickness of action also elicits enthusiasm in Israel. “Two days and two completely different loads – with the CombiMAX that´s no longer a problem“ Michael Tesker (Karmiel Transporters Ltd.)

“Exactly what we need today”

“It´s just a top product“ – that´s how Jef Hufkens from the heavy transport firm Team Heavy Weight sums it up. He uses a CombiMAX combination consisting of two 3-axle bogies, two 2-axles and one 4-axle bogie. Add to that two lowbeds, an Add-On-Beam extension and two goosenecks. „The CombiMAX is very light and more flexible than all the rest. It corresponds precisely to what a transport company needs today”. For internationally-active companies, axle load standards aren´t the same everywhere, which constantly poses challenges in the day-to-day working life of Jef Hufkens. “The advantage is that we can change the number of axles en route without a crane, and even while in loaded condition“. Shortly after the first delivery Team Heavy Weight already ordered additional bogies and beds. Jef Hufkens (Team Heavy Weight)
“The CombiMAX opened new markets for us“

Dom´Azur from Cournon d´Auvergne was the first French customer to receive a CombiMAX. One 1-, 2-, 3- and 4-axle bogie each plus an excavator platform were sent off to France. “This vehicle enables me to tap new markets. Customers from the demolition sector often have to assemble and dismantle their machines and transport the individual parts”. Vivien Bertrand, General Manager of Dom´Azur, can now respond to these circumstances accordingly with the CombiMAX. “Thanks to this semi-trailer, I now offer my customers the possibility of transporting their equipment complete, without dismantling, which is a huge benefit for them”. In the meantime, Dom´Azur too is expanding its CombiMAX combination with additional bogies. Vivien Bertrand (Dom´Azur Transports).