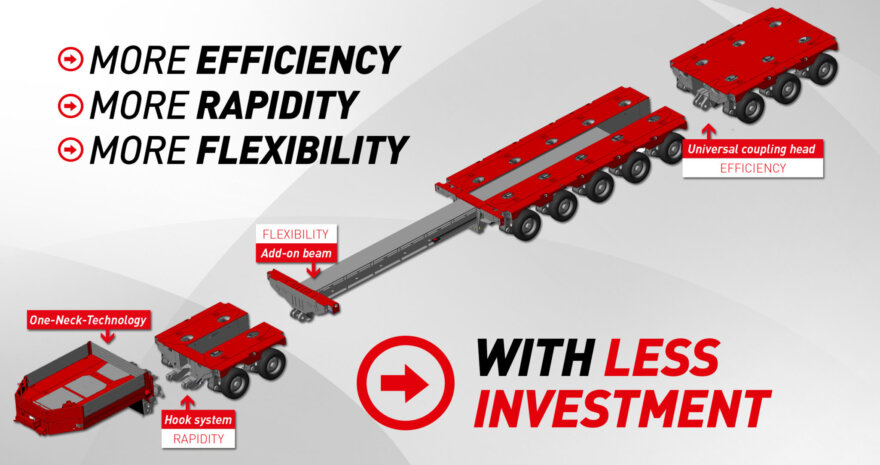 The Faymonville CombiMAX was being awarded this year’s IAA “TRAILER INNOVATION AWARD 2015” in the section “CONCEPT” for its unique and revolutionary low-loader concept COMBIMAX.

The international jury, composed of 11 experts of different trade magazines, took the decision due to the product’s essentially innovative principle.

A great honor, which emphasizes the high level of groundbreaking development and technical excellence.

WINNER OF THE “TRAILER INNOVATION AWARD”

Using a construction kit system with a modular platform structure, Faymonville is setting future-oriented trends on the market with the new CombiMAX series. The strategy in the development of the new vehicle type is based on the variety of combinations of standardised components. The principle is being implemented for pure road vehicles. In this way, from now on, the company can offer its customers individually configured solutions.

INDIVIDUALITY WILL BE CLEARLY MORE COST EFFECTIVE IN FUTURE

With this strategic decision, the product portfolio experiences an innovative, nearly revolutionary expansion. Until now, Faymonville has manufactured vehicles to a large extent according to the principle ‘design to order’, which means: tailor-made solutions, precisely matching the customer’s wishes. This resulted in a current product range with its fourteen basic models and that has become increasingly complex – after all, there are more than three thousand different vehicle chassis with lengths of between 8 and 60 metres and a dead weight of between 6 and 44 tonnes.

“Up to now, this has been without a doubt the right philosophy, because we can quickly and flexibly produce what the customer requires in the short term”, says CEO Alain Faymonville looking back. “This individuality secures the strong and stable market presence for our company.” In the meantime, the complexity of the range is reaching its limits. However, to face this fact, Faymonville is not renouncing the customer-specific solutions, but instead is launching a complementary vehicle, “with which we are providing customers with an inexpensive option of being able to individually configure their own vehicles.” That is how Technical Director Guy Fickers outlines the new product concept. From this perspective, the new CombiMAX trailer can be considered a supplement to the existing MegaMAX, MultiMAX, GigaMAX, VarioMAX and ModulMAX product groups.

AIMING AT ROAD VEHICLE PAYLOADS OF BETWEEN 50 AND 250 T

The principle of modularity is already being applied to heavy load vehicles, but so far it has not been rigorously implemented with pure road vehicles. Modularity and thus versatility are now being transferred to Faymonville’s core product, i.e. to the trailers and stepframe semi-trailers for medium to heavy payloads of between 50 and 250 tonnes. An important reason for the development of the CombiMAX is not least the EU-wide harmonisation of the vehicle registration regulations with the future limitation of the axle load to a maximum of 12 to 14 tonnes. “The worldwide tendency towards the restriction of the axle loads inevitably forces you into new considerations and developments”, says Commercial Director Arnold Luxen.

In order to realise the CombiMAX trailer, a selected development team has developed new components and processes that are considered to be absolutely new on the market. These include, for instance, a lightweight construction for modular vehicle chassis, decentralised ‘add-on’ steering systems, universal goosenecks, lighter pendle axles and independent suspensions, symmetrical coupling heads and modular elements made of over-length edge parts for automatic welding.

The technical advantages of the CombiMAX are far-reaching due to the uniform basic steering alone. “There is only one steering transducer for all steering receivers used so far in the various units”, says Alain Faymonville, mentioning a salient feature of the concept. More precisely, this means that “all steering systems can be controlled by a newly developed, universally usable gooseneck, regardless of whether it involves vehicles with 4 or 8-tyred pendle axles, vehicles with knuckle-steering axles (hydraulic or air suspension), or vehicles with independent suspension from the Twin Axle II series.”

The combination of three coupling systems which have already been familiar for a long time as individual solutions is also new. Regardless of whether bolt coupling, quick disconnect hook system or installable telescopic centre beam – the three components are combined with one another as a standard without any problem on the new CombiMAX. This enables customers to react flexibly to the most diverse transport requirements, even after the purchase.

In addition, the new system interface also enables the direct combination of vehicles with different heights and widths – but with the same axle load in the overall combination.

And then there is also the noticeably easier operation. Until now, this has certainly been a complex challenge for the user, especially with the heavy models. The purposeful streamlining of the operating elements and thus simple operation are an important and often neglected factor in today’s international and strongly networked world of transport.

The decisive positive factor for the freight forwarder is above all the flexible establishment and expansion of his vehicle fleet. “We give our customers a tool with which they can conceive their own vehicle fleet more universally”, says Arnold Luxen, pointing out the high value of the CombiMAX to the customer.

With his capital investment, the freight forwarder can achieve a significantly higher number of transport alternatives, increasing the degree of utilisation and mileage of his vehicles and allowing him to adapt flexibly and promptly to the frequently fast-changing order situation. “Basically he can reduce his idle stock, since he can assemble the transport combination needed at any particular moment from the CombiMAX construction kit. It is ideal, because it fits perfectly”, adds Guy Fickers.

It is also important to allow the customer greater freedom in his decision-making and in his choice – according to the principle: “Define your transport task – configure your vehicle solution!” If the buyer analyses his needs as accurately as possible, the CombiMAX construction kit enables him to find the optimum solution, because that solution is individual.

Conclusion: The new CombiMAX series combines all the advantages of a modular system with the user-friendliness of a conventional heavy load vehicle such as the MultiMAX, MegaMAX or VarioMAX and offers the customer an inexpensive and variable solution for the most diverse requirements thanks to its versatile combinability.

The economic background for the development of the innovative CombiMAX was dictated by the market, which demands continuous optimisation of product variety and production flexibility – in conjunction with a reduction in costs at the same time.

Against this background there would no longer have been any profit on the market within a foreseeable time, since it is out of all proportion to the technological development costs. With the CombiMAX trailer, however, Faymonville is also creating new in-house economic perspectives. “We can reduce the internal work expenditure by means of rigorous standardisation”, says Arnold Luxen.

And Alain Faymonville adds, “With the CombiMAX we will also be able to turn customer-specific requests faster, more flexibly and more economically into individual vehicle solutions.” At the same time the CEO emphasises that “we are not really inventing anything new.” All the individual solutions already exist. “With the CombiMAX, however, we are creating a common platform with which we can combine the advantages of the existing series (MegaMAX, MultiMAX, GigaMAX, VarioMAX and ModulMAX) in a variety of ways.”

Every conceivable combination can be configured from the variable basic principle of the CombiMAX – even more efficiently than in the automotive industry, where the platform concept has been a valued and proven standard for years. “With the CombiMAX trailer we are practically drawing the connecting line from the Polo to the Bentley.”

Faymonville can produce models ‘ad infinitum’ from now on with a manageable number of components. To put if briefly: with its virtually limitless combinability the CombiMAX is opening the door to the market of unlimited possibilities.

The importance attached to this project within the Faymonville company is visible not least from the planned investment sum, which the management puts at € 30 million by the end of next year. “But we definitely want to revolutionise the low loader market and to set a further milestone in the industry.”

The development of the CombiMAX also necessitates an expansion of the production locations. The floor area of the steelwork factory in Goleniow/Poland has been enlarged by a further 6300 square metres and the workforce has also been increased.

A new assembly plant for the CombiMAX trailer is currently under construction in Lentzweiler/Luxemburg. Faymonville is building a workshop with a floor area of 10,000 square metres for assembly and surface treatment on an area of 7.5 hectares. A possible subsequent doubling of the capacity is accounted for in the planning. The conception of buildings and production equipment is guided by an optimum process developed internally by Faymonville on the basis of the positive empirical values with the MAX Trailer. With regard to productivity, however, an even higher level is to be achieved.

In Lentzweiler too, production is starting in the initial phase with additional qualified workers. A new training and distribution centre is being added in Luxemburg – not only for the CombiMAX, but for all Faymonville products that are manufactured in Lentzweiler.

IMPORTANT FINDINGS FROM THE PHILOSOPHY OF THE MAX TRAILER

After all, the MAX Trailer is also a standardised product in proven Faymonville high quality, which was well accepted by the market in a very short time. A success that is based not least on the concept of the configurable, modular construction kit with cost-optimised assemblies, standardised interfaces and the maximum number of common parts.

“That was without a doubt a welcome experience”, says Yves Faymonville, looking to Goleniow, where the MAX Trailer is manufactured in an assembly hall specially built for the purpose. Arnold Luxen also sees it that way. “The CombiMAX concept is based in terms of standardisation, configuration and logistics on the MAX Trailer philosophy – but adapted for higher payloads.”

FROM ‘DESIGN TO ORDER’ TO ‘CONFIGURE TO ORDER’

The first prototypes of the CombiMAX are currently undergoing trials – partly in in-house tests and partly on behalf of customers. Hence, the goal which Faymonville has set out for itself, namely the continuous production from early autumn, can be maintained – initially still in Büllingen, then from next year in Luxemburg.

Guy Fickers is firmly convinced that “we are capturing the spirit of the time with the CombiMAX trailer”, particularly since the expectations on the market are both high and positive after the initial feedback from the circle of selected core customers.

Therefore, the long-term internal target from 2016 on is extremely ambitious. Faymonville plans to produce up to 400 CombiMAXes per year in future. This process will be accompanied by the creation of further jobs in Poland and in Luxemburg.

With the CombiMAX trailer, one principle applies both to the company and to its customers from now on: in engineering and production, success will lead away from the principle of ‘design to order’ towards the main idea ‘configure to order’.