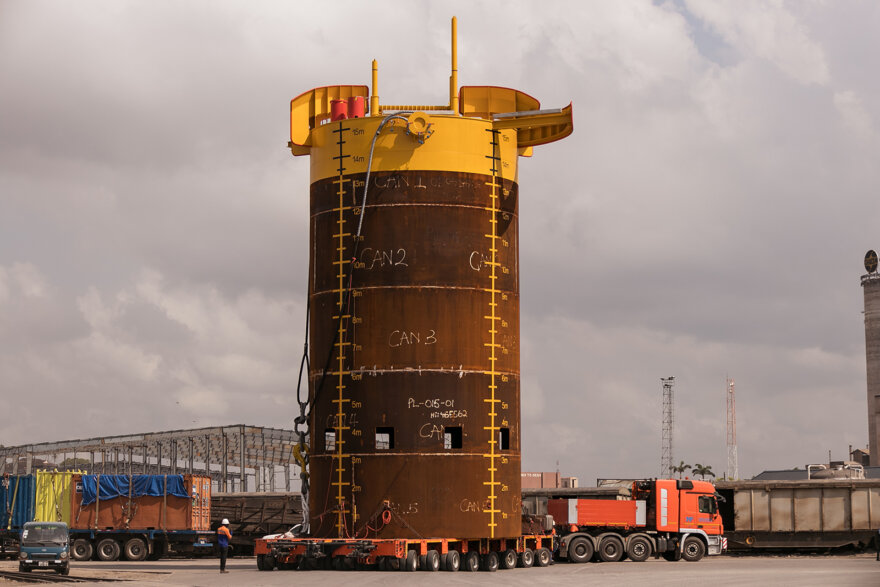 “When I first got the request to move the suction pile in a vertical position, I was skeptical to say the least. I had seen this been done before but on a much smaller scale”, declared MD, Peter Everett from MONPE Ventures about this non-typical challenge.

The suction pile was 8m in diameter, 16m high and weighed 125t. To build the ideal transport configuration, 16 modular axle lines were assembled side-by-side in a 4-file configuration. A solution that Peter Everett defined together with Faymonville. “Their engineers came up with this solution. At first, the tipping limits were barely acceptable, so we added 44t counterweights to reduced the height of the centre of gravity.”

The piece was fabricated by Belmet 7 inside Takoradi Port. MONPE Ventures transported it from their yard to the quayside, a distance of 3km. “There are chambers and ruts on the road, but it was extremely stable. The client was so impressed that a local company had the equipment and support from the manufacturer to do such a job,” said Everett.

At the quayside, it was loaded on a vessel to be dropped on the seabed to be used as an anchor for the FPSO (oil platform) in the Ghana oil and gas fields.

Established in 2005, family company MONPE is a leading specialised and heavy haul transporter in Western Africa. MONPE’s eye-catching orange fleet of modular trailers includes 16 axle lines, two necks and decks, as well as a drawbar and 4-file kit, allowing them to be extremely versatile with regards to a very wide range of transport challenges throughout Western Africa.

Faymonville can state that its footprint and market penetration on the African continent have grown consistently over the years, making it an important pillar in their worldwide network. Several hundred units were delivered. Besides modular trailers, numerous semi-trailers, extendable flatdecks, dollies and further specialised solutions from Faymonville help to move machinery and project cargo safely and successfully in Africa.