Goldhofer: Rescue for a mini(ng) excavator 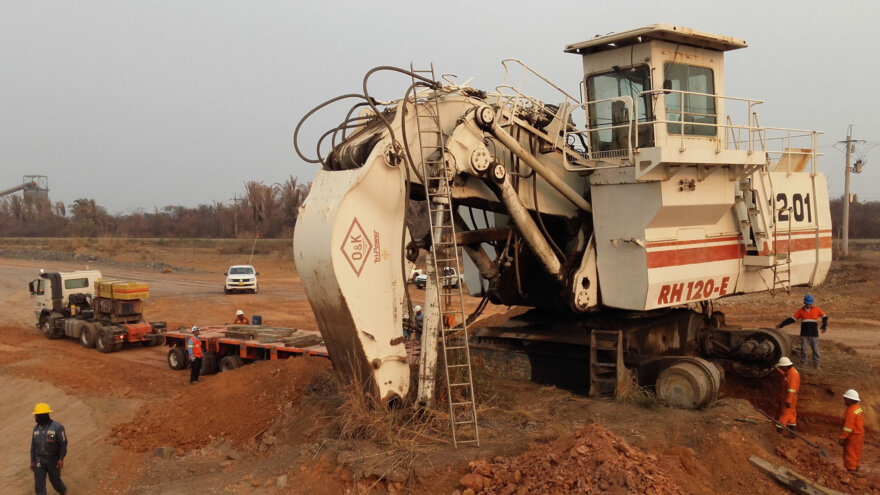 Collecting an old front shovel excavator from the grounds of the Calenturitas de Prodeco Mine in northern Colombia could hardly have been more challenging: The engine of the O&K RH 120-E mining excavator had given up the ghost and could not be repaired on site, leaving the 250-ton monster stranded on top of a pile of earth. The mining company therefore turned to the well known heavy haulage specialist Boom Logistics to collect the excavator and transport it to the repair shop 22 kilometres away – with the help of a 12-axle THP/SL heavy-duty combination from the house of Goldhofer. With all the equipment in excellent condition, the prerequisites were therefore fulfilled for handling the complicated loading and unloading processes smoothly and safely.

Extensive preparations were needed for loading the axle lines because of the difference in height between the mining excavator and the transport system. As a first step, the earth had to be extracted from under the excavator – with the greatest possible care – to create enough space for the heavy-duty module to be manoeuvred into place ready to take the load. When enough material had been removed, the excavator was left standing with just the wheel hubs sitting on the earth, while the rest of the pile had all but disappeared. The next step was to position the THP/SL underneath the excavator and use the hydraulic suspension stroke to take the load. With the excavator safely loaded, the remaining earth was removed on either side so that the heavy-duty module was left standing free. A dump truck and a pusher were then used to manoeuvre the transporter with its load across the uneven ground to the road, where two tractors were waiting to tow the mining excavator to the Calenturitas de Prodeco repair shop. There it was unloaded the following day and subsequently repaired.