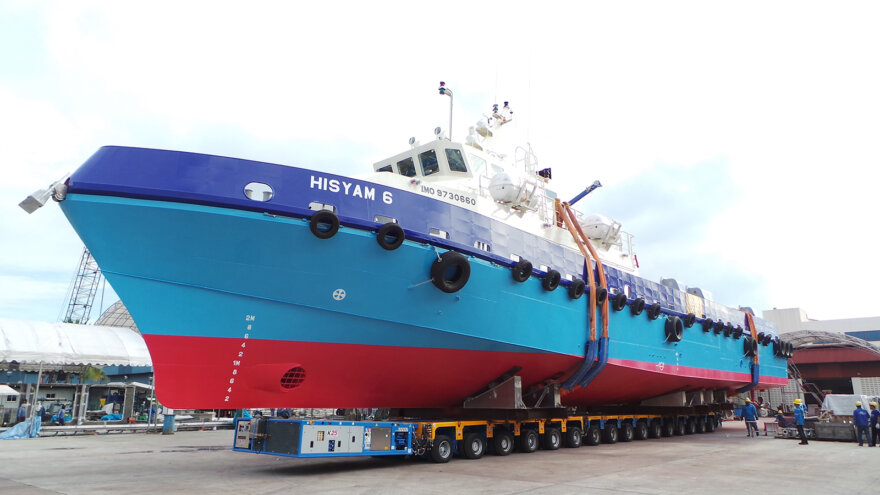 Currently, the HISYAM 6 – a 41 metre long and 8 metre wide operational transport vessel – is being deployed in the Straits of Malacca located between the Malaysian peninsular and the Indonesian island of Sumatra. However, in order to get there, it had to be moved 800 metres from the dry dock to the water’s edge. For this important last step, Huationg Inland Transport, Malaysia relied on the proven SCHEUERLE-KAMAG K25 H SP in combination with conventional, non-driven K 25 H modules.

The HISYAM 6 weighs 125 tonnes and provides a shuttle service for workers between the mainland and various offshore oil production facilities. During operations, the transport boat reaches a speed of around twenty knots which is close to 40 kilometres per hour. Somewhat slower but moving extremely safely due to the precise control of speed and manoeuvring, transportation proceeded on the sixteen K25 H axle lines. For ensuring form-fitting positioning of the sensitive hull, five load distribution devices were used.

Jannick Mathieu, Area Manager Sales at TII Sales, explained: “The K 25 H SP is ideal for the transport of water vessels of all types as well as being very suitable for moving much heavier loads. Due to the extremely precise axle compensation of hydraulic pendulum axles, the sensitive control via remote control and the unmatched reliability, the vehicle is highly rated and popular at numerous shipyards around the world.”

SCHEUERLE-KAMAG K25 H SP and SPE vehicles are available in three, four or six-axle versions. They are a cost-effective addition to create self-propelled transport units together with other K25 H vehicles. Their advantage is not only found in the low and robust construction but also in the sophisticated and ingenious control technology. In particular, operators of non-driven K25 H fleets greatly appreciate the SP and SPE models which can easily be coupled with the pulled versions thus realizing self-propelled vehicle combinations for on-site transportation assignments, and in the process open up new areas of business.