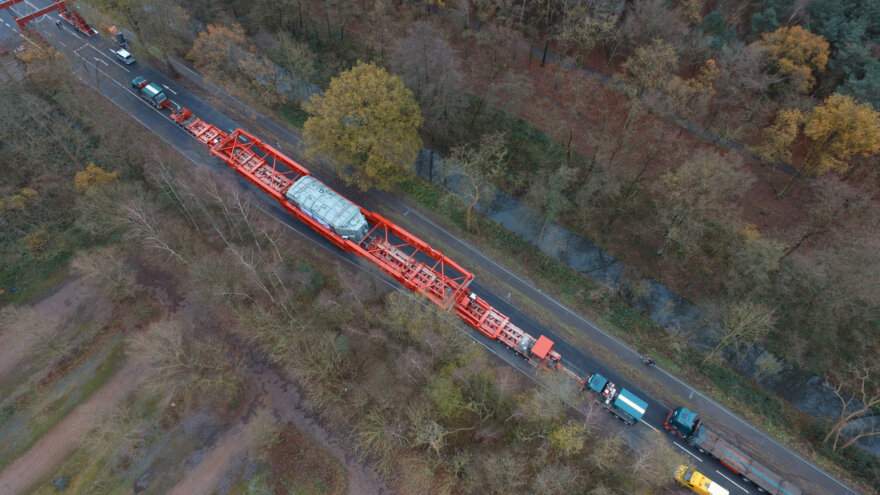 The G²│K 600 operated by Kahl Schwerlast GmbH (Moers) has made light work of a further exceptional assignment with two record-breaking journeys. The 600t high girder bridge built by Goldhofer (Memmingen) in cooperation with the Greiner Company was used to transport two transformers weighing 475t each over a distance of just under eight kilometers – at a gross combination weight in each case of no less than 909t.

The two 685 MVA transformers, built by General Electric in the former Alstom works in the Mönchengladbach district of Rheydt, had to be transported by road and barge over a total distance of 681km to Dörpen in Lower Saxony. There the grid operator Tennet is in the process of upgrading a substation, and the two transformers have a key role to play in the project. They will be used to convert energy from wind power, which is delivered to Dörpen from a converter station in the North Sea via a DC cable, into three-phase AC current for feeding into the German national grid at a voltage of 380kV.

The main challenge on the journey was the 7.8km section between the Korschenbroich district of Kleinenbroich and Kaarst, which involved passage over five bridges including a railway bridge. “Without the G²│K 600, we could not have handled the project,” says Kahl employee André Krause, who was responsible for the smooth running of the operation together with project chief Olaf Weltz. “It was the G²│K 600 system that made it possible for the two transformers to be shipped.”

It is for just such exceptional jobs that Goldhofer and Greiner, as two of the world’s leading manufacturers of vehicles for heavy and oversized cargo transportation designed and built this high girder bridge. And the G²│K 600 is a unique and highly versatile transport solution that is literally able to bridge bridges – with a flexible choice of configurations up to 2×24 axle lines and a load-bearing capacity of up to 600t.

This transformer shipment was a convincing demonstration of how the G²│K 600 high girder bridge can be adapted with maximum efficiency to a challenging cargo on an individual basis: The ultra-heavy load was transported safely on a route involving critical structures with optimum results in terms of time and costs. For the first leg, each transformer was placed on a 20-axle heavy-duty trailer and transported twelve kilometers from the works in Rheydt to Kleinenbroich, where a 720t hydraulic lift system was used to raise the cargo and place it with maximum precision on the two telescopic beams mounted on the load hanger of the G²│K 600. The five bridges, including a bridge over the Neuss-Mönchengladbach S-Bahn line, are subject to a weight limit of 20t per axle line, and the heavy-duty transport specialists from Moers configured the G²│K 600 accordingly. The complete push-pull tractor trailer rig, with 2×22 axle lines, measured (L) 109m x (W) 7.5m x (H) 6m.

“To satisfy a condition imposed by the highway authority, a complex bridge monitoring system was employed using sensors from the TÜV supervisory authority,” says André Krause. “That ensured that no damage was caused by the loads imposed on crossing the bridges.” Another big advantage of the solution adopted was time savings derived from the reduced axle loads. “Four of the five bridges could be crossed without the need for any temporary bridge structures,” Krause explains. Nor did the G²│K 600 have any problems negotiating two road junctions with 90-degree turnings. And not surprisingly – with a maximum stroke of no less than 2145mm – no problems were encountered with humps or crash-barriers.

On arrival at Kaarst after the 7.8-kilometer section, the 475t transformer measuring (L) 14.36m x (W) 5.26m x (H) 5.56m was moved back onto the 20-axle trailer using a second 720t hydraulic lift system. “And then the whole procedure was started all over again,” says André Krause. Back on the heavy-duty trailers, the two transformers still had to complete the journey to the Rhine ramp in Düsseldorf-Lörick, where they were loaded onto pontoons for the final leg of the journey to Dörpen. This very special operation was handled in six days by eleven employees of the Kahl Schwerlast company.