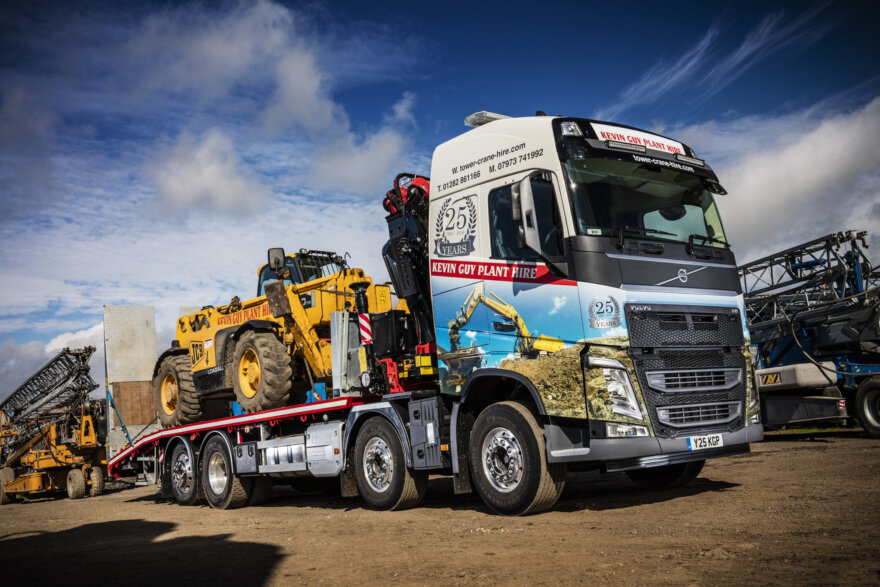 The newest addition to the company’s fleet, which has been chosen specifically for the nationwide transportation of self-erecting tower cranes, features rear air suspension, a Globetrotter cab and a single tyre tag axle.

Equipped with a Sterling Truck Bodies cheese-wedge, beaver-tail body featuring an 8-metre deck length, the company’s flagship truck boasts a Fassi 545RA crane, with a 54 tonne-metre capacity, fitted by The Crane Centre in Sandbach – the first example of this model in the UK.

Company founder Kevin Guy says: “The Fassi crane with its sub-frame weighs in at some 7-tonnes so to achieve a payload of even 12-tonnes we opted for the single tyred tag and Alcoa brushed aluminium rims.”

The company specialises in the hire and sale of San Marco and Vicario self-erecting tower cranes as well as the hire of excavators, telescopic handlers, backhoe loaders and dumpers up to 9-tonnes.

“Cranes are a real focus for us at present and this new Volvo FH with drawbar trailer is perfectly suited to getting the self-erecting cranes on-site. Due to the ballast required by the cranes, the tallest of which has a hook height of 25m, we needed the 44-tonne GTW of the Volvo FH drawbar outfit,” says Kevin.

“Furthermore, to celebrate the 25th anniversary of the plant hire business I wanted something a bit special and while we already have a couple of Volvo FM12s, the FH really looks the part. We’ve even had a vinyl wrap on the cab, done by local company Text Styles of Colne, so it really stands out.”

The new truck is expected to cover some 100,000km per annum and will likely be replaced in approximately 4 years’ time. “My aim is to get our trucks on to a 4-5 year replacement cycle,” says Kevin. “We’ve not managed that yet as we still have a 2003 Volvo FM12 8×2 with a PM 37 tonne-metre crane that continues to look after us really well, but looking forwards I would like to implement a more regular replacement cycle.”

While the company regularly handles its own maintenance, the FH will be an exception as Kevin will be taking an R&M contract from Thomas Hardie Commercials. “Neil Crook at the Preston dealership has supported us really well and with this being our first Euro-6 truck I think it’s best to have it looked after by the dealer,” says Kevin.

Care sits at the top of the list for driver Paul Kenyon too, who is absolutely delighted with the company’s latest acquisition. “Paul loves this truck,” says Kevin. “He says the cab is very driver-friendly with plenty of space and storage and when it comes to driving he says it is really comfortable, especially with the I-Shift transmission. This truck really is his pride and joy and I know he’ll look after it well.”

Currently Paul is working 3-4 nights away each week delivering cabins to a large water pipeline project in North West England. “Scheduled to be on this project for several months, the comfort of the Globetrotter cab featuring the Volvo Living package really comes into its own,” says Kevin.

When it comes to driving Kevin says the Volvo 12-speed I-Shift automated manual transmission is simply the smoothest gearbox out there. “I love it!” he enthuses.

“Generally I would say the reliability you get with Volvo is a great reason to keep going back to the marque. Add in the transmission, the fuel efficiency, the suitability for our work and the support we get from Thomas Hardie Commercials and I can assure you our next truck will also be adorned with the iron mark,” says Kevin.