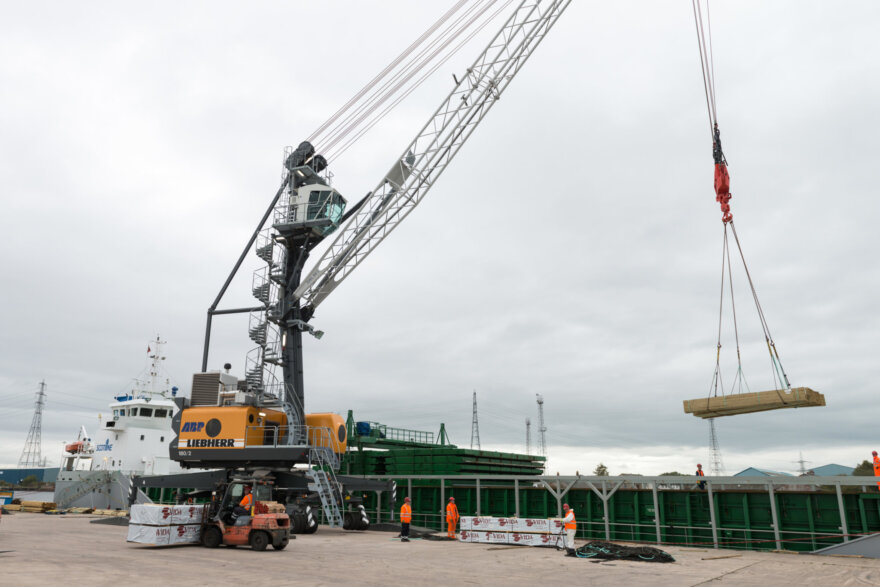 ABP Newport has purchased the most advanced mobile harbour crane in the country from Liebherr-Great Britain.

The new state-of-the-art LHM 180 mobile harbour crane will increase the efficiency of ABP’s Newport operation as throughput at the 685-acre port, which currently handles around 1.5 million tonnes of cargo annually, continues to increase year-on-year.

After travelling from Liebherr’s Nenzing factory via ABP Hull, the LHM 180 arrived at ABP Newport in component form and was assembled by a team of engineers from Liebherr-Great Britain and Liebherr-Werk Nenzing. The crane, which represents a significant investment for ABP Newport, took two weeks to assemble.

Once fully operational, the LHM 180, which has a maximum lifting capacity of 64 tonnes and an outreach of up to 35 metres, will principally be used for the handling of bulk materials by means of a 24m3 Verstegen mechanical grab and is also fitted with a powered rotating hook to enable it to handle project cargo and containers.

The 24m3 Verstegen mechanical grab is a particularly large grab for the LHM 180 model but this crane will be the first in the UK to be fitted with Liebherr’s new SmartGrip bulk handling system.

SmartGrip enables considerably larger grabs to be fitted than was previously possible. This unique technology operates as an intelligent system that optimises grab filling rates in a self-learning manner with SmartGrip’s numerous advantages also including greater performance efficiency and zero overloads.

This crane will also be fitted with:

• Liebherr Cycoptronic anti-sway system, which automatically removes all sway from the crane’s ropes.

• Liebherr Teach-In: This semi-automatic driving system enables two target points to be set, one target point over the vessel’s hold and a second over the centre of the hopper, with the crane automatically taking the most efficient route between the two set points and simultaneously removing any sway from the ropes.

The addition of this new LHM 180, which joins another LHM 180 purchased in 2013, brings the total number of Liebherr LHMs based at ABP Newport to three. Liebherr-Great Britain is delighted to be continuing its long-standing relationship with ABP Newport.

Robert Alexander, Sales Manager at Liebherr-Great Britain and Ireland said: “It has been a pleasure working with ABP Newport. The purchase of the new crane builds on an excellent working relationship and adds to the growing fleet of Liebherr cranes within ABP as a group. We wish the port every success as they expand their operations and we look forward to working with them again in the future.”